Economic inequality, on the rise for decades in the United States, is reshaping the wealth and income landscapes so that the gains of prosperity and growth are largely only shared by those at the very top. As a result, income mobility continues to decline, educational achievement gaps continue to rise, and disparities in health outcomes among different income groups continue to grow. Austin Clemens put together eight graphics to illustrate these realities, and why the work Equitable Growth does to study how inequality impacts growth and stability in the U.S. economy—and how American families are affected as well—is so important.

The way the U.S. Bureau of Economic Analysis currently measures economic and income growth using Gross Domestic Product does not accurately account for the lived experience of most people. That’s why our GDP 2.0 project for a new measurement strategy—breaking out growth by income decile—is key to affective economic policymaking and why this week, along with 10 other organizations, we endorsed the Measuring Real Income Growth Act of 2019, which would enable this measurement reform to happen. The bill, sponsored by Rep. Carolyn Maloney (D-NY) and Sens. Chuck Schumer (D-NY) and Martin Heinrich (D-NM), would, for the first time, enable us to see who really prospers when the economy grows.

Various studies show how deeply recessions negatively affect economic outcomes of young college graduates, particularly compared to other age cohorts—that is, younger workers tend to experience higher unemployment rates, lose access to valuable trainings and experience, and suffer more severe income losses. But a new working paper shows that the damage to younger workers is worse and lasts longer than previously thought. Jesse Rothstein summarizes his research findings, writing that “those who enter the labor market during recessions have permanently lower employment and earnings, even after the economy has recovered”—making it even more imperative for policymakers to do more to prepare for and ameliorate future recessions. (If they need any ideas, Equitable Growth and The Brookings Institution’s Hamilton Project recently released a book, Recession Ready: Fiscal Policies to Stabilize the American Economy, arguing for six policies that can do just that.)

More lenient U.S. antitrust rules, caused by fears of what strict regulations might do to innovation and product markets, are extremely costly to consumers. Michael Kades in his Competitive Edge post runs through the example of the pharmaceutical industry, showing that the adoption of the lenient scope-of-the-patent rule cost U.S. consumers more than $60 billion. He also shows that later, stricter antitrust enforcement did not end pharmaceutical settlements, nor did it deter innovation in the industry or prevent generics companies from challenging patents. Thus, he argues, an even stronger rule may be even more effective.

In case you missed it, Equitable Growth recently released its 2020 Request for Proposals, and this year, we have also launched a separate RFP focused exclusively on issues relating to paid family and medical leave. Alix Gould-Werth explains why we opened this second stream, why this issue is such an important one to study, and why it should be looked at now.

We are excited to welcome Tara McGuinness to our Board of Directors. McGuinness has a long history of leadership in organizations that serve the public, and is a strong believer in evidence-backed policies and programs that help local communities. She is currently a senior fellow at New America, a public policy think tank, and teaches public policy at Georgetown University.

Head over to Brad DeLong’s latest worthy reads for his takes on recent must-reads from Equitable Growth and around the web.

Four decades of economic inequality are driving American cities apart, writes Emily Badger and Kevin Quealy for The New York Times’ The Upshot, using the divergent paths of New York City and Binghamton, NY to illustrate inequality’s effects. In 1980, the gap between the top and the bottom income groups were about equal in both cities, but nowadays, wage inequality is much higher in New York City than in its upstate counterpart. “Economic inequality has been rising everywhere in the United States,” the authors write. “But it has been rising much more in the booming places that promise hefty incomes to engineers, lawyers and innovators. And those places today are also the largest metros in the country: New York, Los Angeles, San Francisco, San Jose, Houston, Washington … [i]n these places, inequality and economic growth now go hand in hand.”

The rise in street protests demanding societal change around the globe are being driven by a new type of inequality, according to a new UN Development Programme report, which notes that shifts around technology, education, and climate change are causing an inequality of opportunity rather than wealth that is increasingly motivating pushes for change. Jason Beaubien of NPR explains that as a result, our 20th century ideas for overcoming wealth inequality—finding ways for underprivileged communities to get better jobs that give them access to a larger slice of the economic pie—may not be relevant anymore for this new cohort of young people, who are “educated, connected, and stuck with no ladder of choices to move up.”

Some good news for workers in Washington state this week: The state Department of Labor and Industries approved the nation’s toughest overtime rules, entitling salaried workers (up to about $83,000 annually) who spend more than 40 hours a week on the job with time-and-a-half pay. The rules will phase in by 2028 and are expected to restore protections for thousands of workers in various job categories and boost the state’s middle class, writes Gene Johnson for AP.

More than 2 million federal workers are likely to receive paid parental leave for the first time in our nation’s history, reports Li Zhou for Vox. A U.S. military budget bill that includes 12 weeks of paid time off for all federal government employees to care for a new child is expected to pass through Congress before the end of the year, and President Donald Trump is expected to sign it. The pending new law will not affect those U.S. workers who are not employed by the federal government—and pales in comparison to other paid leave proposals put forward by Members of Congress—yet this is a definite step forward for a country where neither paid nor unpaid family or medical leave is a guarantee for most workers.

Society bombards us with the image of a two-parent household as the best family structure in which to raise a child. Not only is this held up as the gold standard, but families who deviate from this structure are also often blamed for all manner of societal ills. Perhaps it’s time to look at the research on this, writes Christina Cross for The New York Times. When we do, it becomes clear that access to resources, more than two-parent households, is what matters most for success—especially for African American children, whose social and economic disadvantages are commonly written off as stemming from the prevalence of unconventional family structures in black communities. This is not to say that the two-parent structure is bad by any means, Cross continues, but rather that other solutions would make more of a difference in the lives of black children. 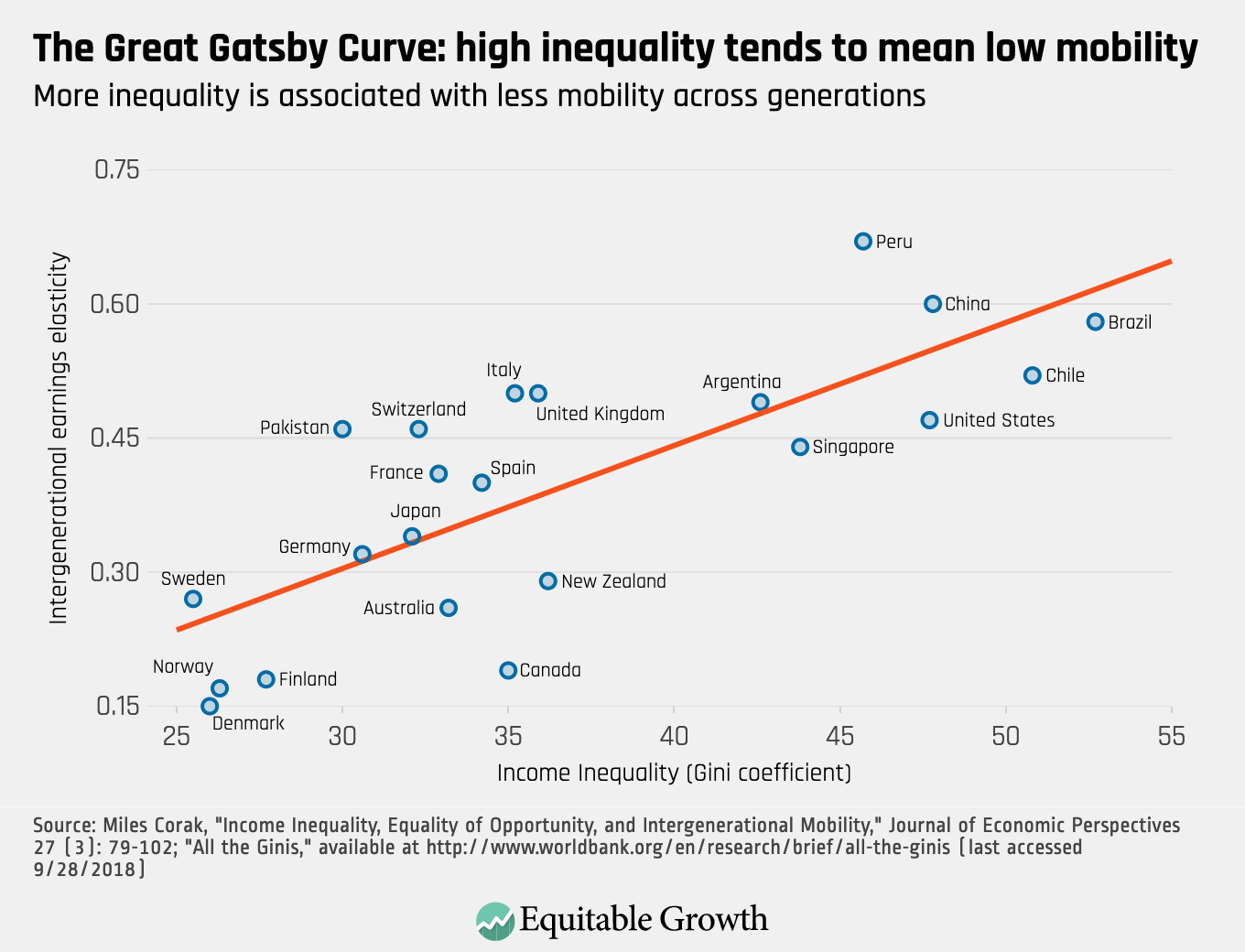 Figure is from Equitable Growth’s “Eight graphs that tell the story of U.S. economic inequality” by Austin Clemens.