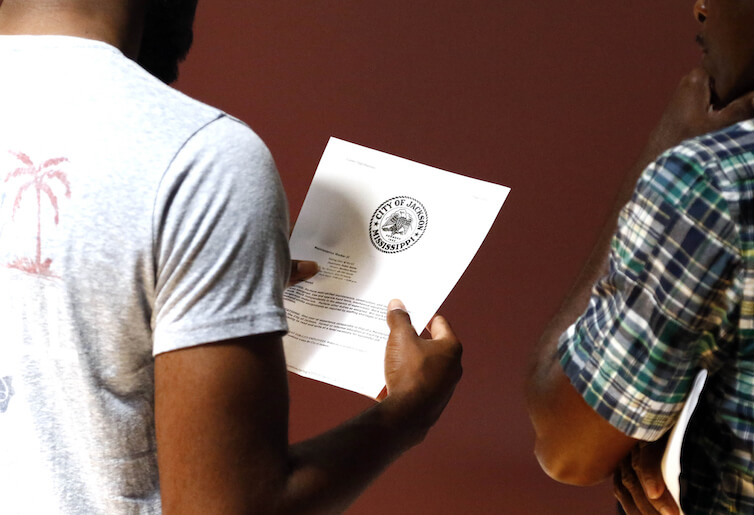 Fifty years after the U.S. civil rights movement, racial economic inequality remains an undeniable force in American life. The family income gap between blacks and whites today remains at almost exactly the level it was in the 1960s—just one of many indicators of the remarkably little progress toward racial convergence in family income. Many well-documented factors contribute to this income gap, among them ongoing discrimination in the labor market, racial differences in family structure, and segregation by occupation and neighborhood.

One underappreciated factor that contributes to the racial income gap is the lack of equitable growth in the U.S. economy at large. Since the 1970s, the share of national income going to the richest 1 percent almost doubled, while wages for most Americans remained stagnant. As I show in a recent paper, “Income Inequality and the Persistence of Racial Economic Disparities,” rising income inequality has disproportionately harmed African Americans, negating substantial improvements in relative terms and preventing what would otherwise have been a meaningful, if incomplete, convergence in incomes between blacks and whites. In short, inequitable growth over the past few decades is a major driver of our nation’s persistent racial income gap.

Let’s first look at the average income for African Americans as a fraction of the average income for whites over time. Whether we choose mean or median, family or household income, the picture is the same: There has been virtually no improvement in the average ratio of black to white income over time. Focusing on median family income, in 1968, just after the civil rights movement, the median African American family income was 57 percent of the median white American family income. In 2016, the ratio was 56 percent. The utter lack of progress is striking. (See Figure 1.) 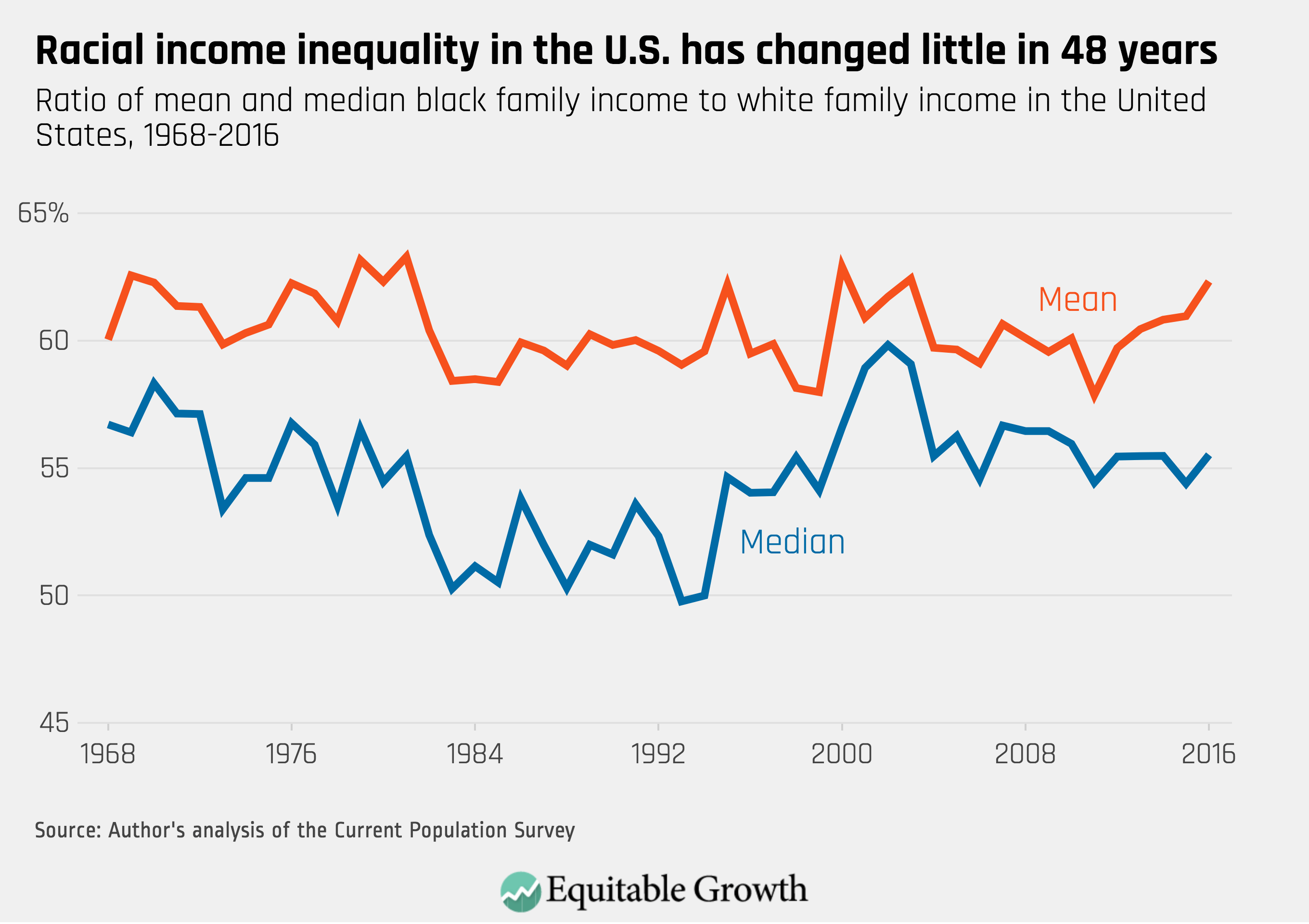 It’s also a bit puzzling because racial gaps in many other social outcomes have contracted since the 1960s: College attainment, high school test scores, and life expectancy all have seen some convergence between blacks and whites, though progress in these areas is by no means complete.

So, why has there been so little progress toward equalizing incomes? Well, it turns out that the intransigent racial income gap is the result of two opposing trends. On the one hand, blacks have made real progress climbing to higher positions on the income distribution. From 1968 to 2016, the median African American climbed from the 25th percentile of the national family income distribution to the 35th percentile. While this progress is nowhere near complete, it was enough to narrow the gap in income ranks between blacks and whites by almost a third. In the 1960s, the large majority of whites earned more than the typical black person. By 2016, that proportion had declined substantially. This progress came despite continued racial disparities in parental wealth, access to educational resources, and treatment in the labor market. (See Figure 2.) 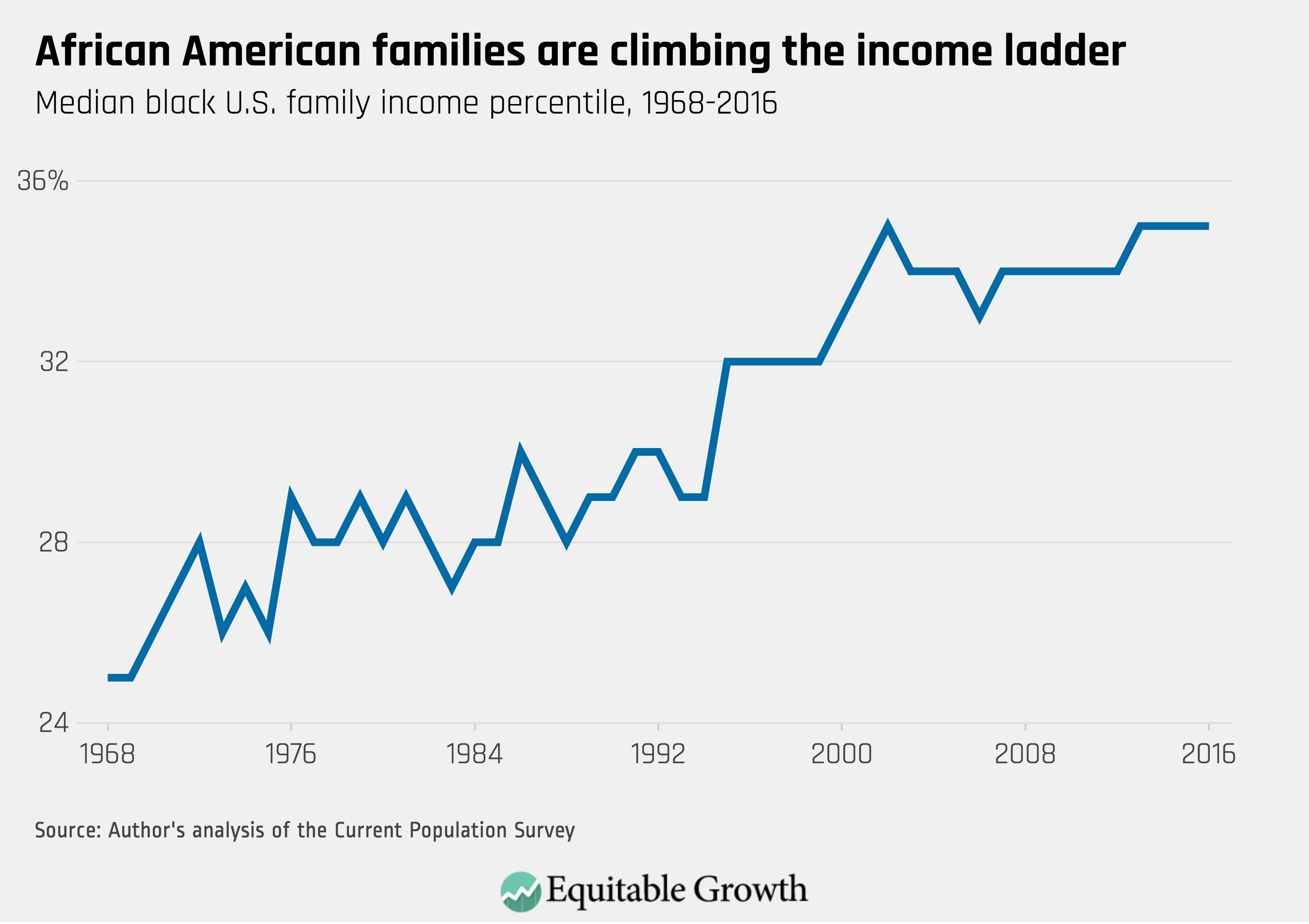 On the other hand, just as African Americans were entering the ranks of the middle class in large numbers for the first time, broader economic forces were undermining the financial security of families across all races. Starting in the 1970s, changes to the economy and to public policy began concentrating a larger and larger share of national income in the pockets of the richest members of society. Incomes for the middle class and the poor have hardly grown at all, while incomes for the richest 1 percent almost tripled.

These changes to the income distribution mean that as more African Americans succeed in overcoming the many obstacles to reaching the middle class, the payoff is not as great as it had been for social groups that climbed the income ladder earlier in U.S. history. To see this, consider the income earned at the 35th percentile, where the median African American stood in 2016. In 1968, a person at the 35th percentile had an income 69 percent of the national mean. But by 2016, income at the 35th percentile had fallen to be just 49 percent of the national mean. Because of rising income inequality, successfully reaching the middle of the income distribution did not provide the same economic reward to blacks as it had to previous groups of Americans. (See Figure 3.) 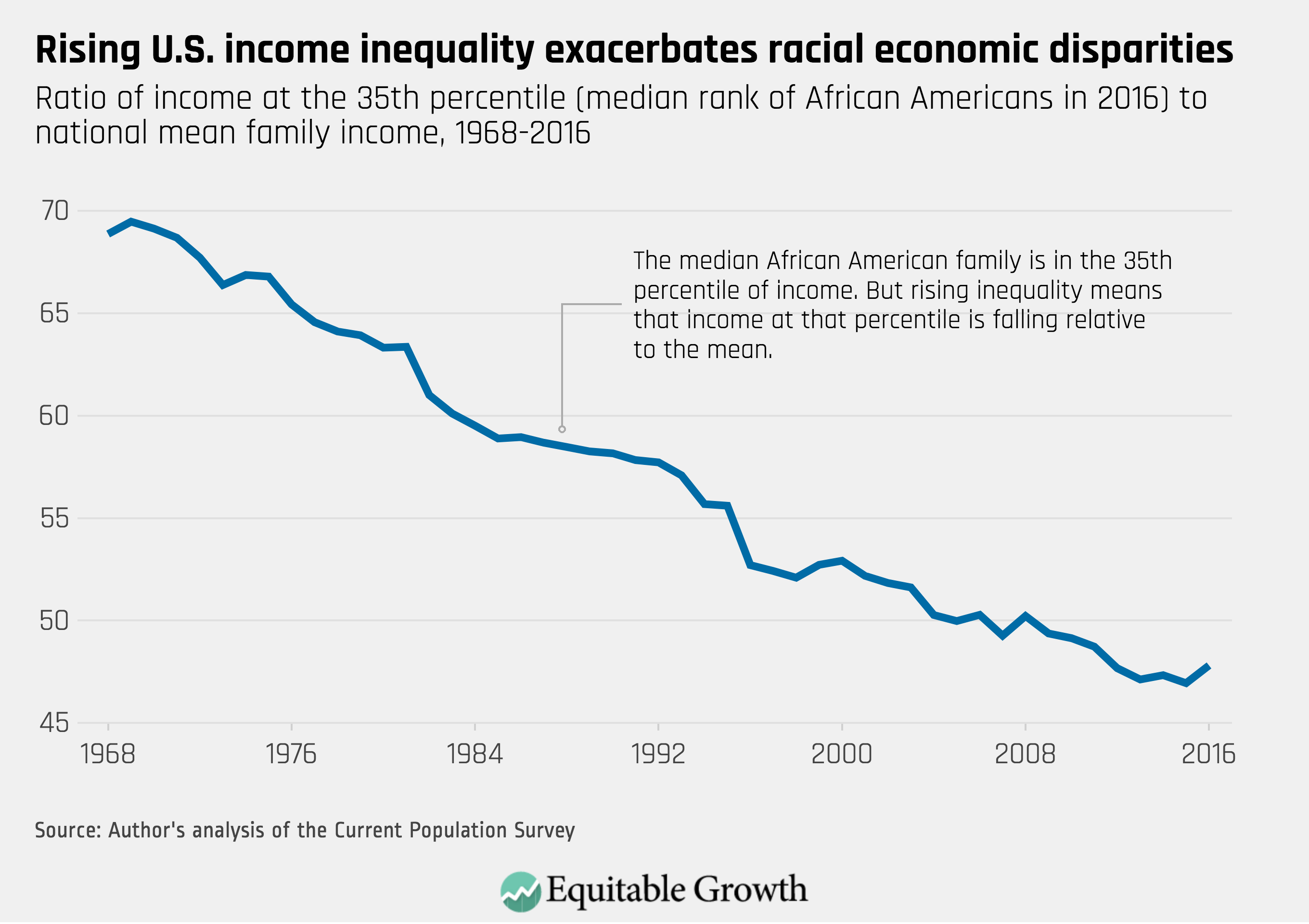 The effect of rising income inequality on racial disparities also becomes evident by simulating what the income gap would look like if the overall income distribution had stayed constant. If overall inequality hadn’t gone up, the ratio of median black family income to white family income would have climbed from 57 percent to 70 percent, decreasing the racial income gap by 30 percent. That would still be a far cry from racial economic equality, of course. Racial discrimination, residential segregation, neighborhood disinvestment, and other remnants of America’s long history of racial subjugation would all still be present even if overall economic inequality hadn’t gotten worse. But this simulation shows that in a world where our country’s growth were shared more equitably, we would have a substantially smaller racial income gap than we see today.

Of course, rising inequality has hurt Americans of all races—even for whites, the median income has declined by 14 percent as a share of the national mean over the past five decades. But because African Americans remain overrepresented among the poorer segments of society, economic shifts that have harmed almost everyone have also increased the average income gap between blacks and whites. These shifts were strong enough to undo what would otherwise have been substantial—though far from complete—progress toward racial equity in income.

These findings demonstrate how economic inequality and racial inequality are fundamentally intertwined. Over the past 50 years, a fairly large improvement in the relative position of African Americans was entirely undone by national economic shifts. Going forward, high levels of overall inequality will make it harder to achieve racial parity since any improvement in relative terms means less in terms of dollars.

Yet this analysis also shows how policies to make the economy more equal in general can contribute to greater equality between races—a point many civil rights leaders and academics have made over the years. The vast majority of Americans have an interest in reversing wage stagnation and making the economy more equitable. This offers a second front in the battle for racial equality. Efforts to reduce discrimination, equalize access to education, ensure equal treatment by the legal system, and otherwise end racial stratification should continue since they seem to be making real, if slow, progress. But these policies should be paired with broader economic policies to end wage stagnation for Americans of all races and, in so doing, reduce the gaps between racial groups.

—Robert Manduca is a Ph.D. student in sociology and social policy at Harvard University.

(This article summarizes findings from “Income Inequality and the Persistence of Racial Economic Disparities” in Sociological Science. This post is adapted from a piece that appeared on the Work In Progress blog of the American Sociological Association.) 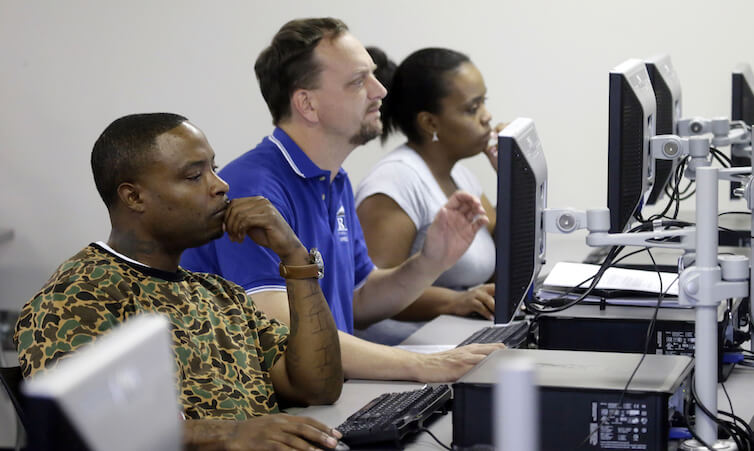 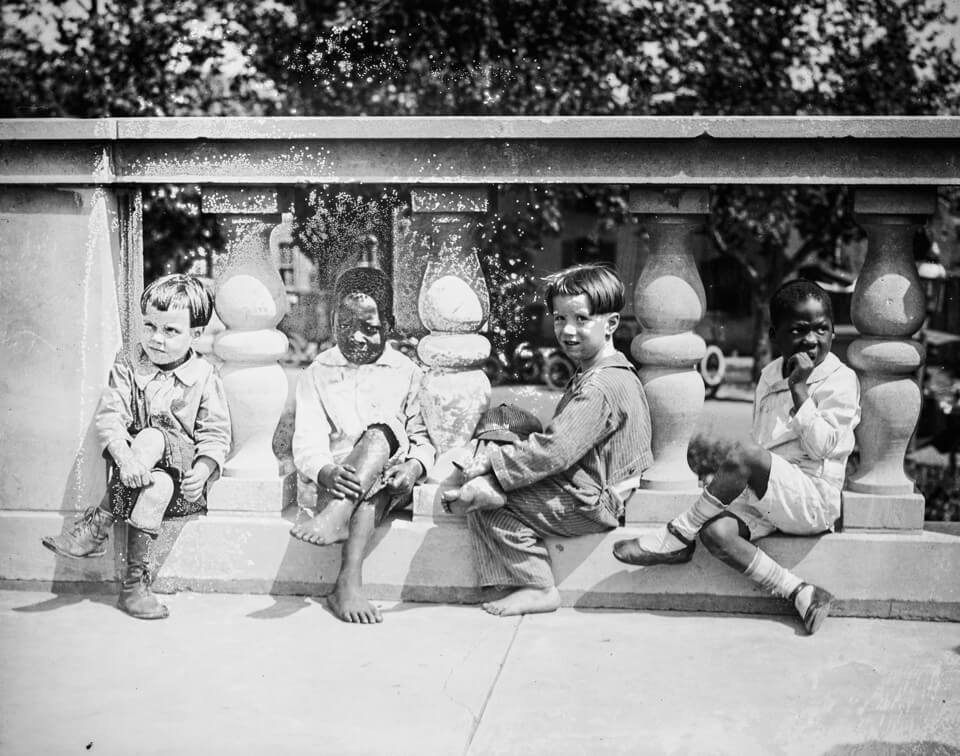 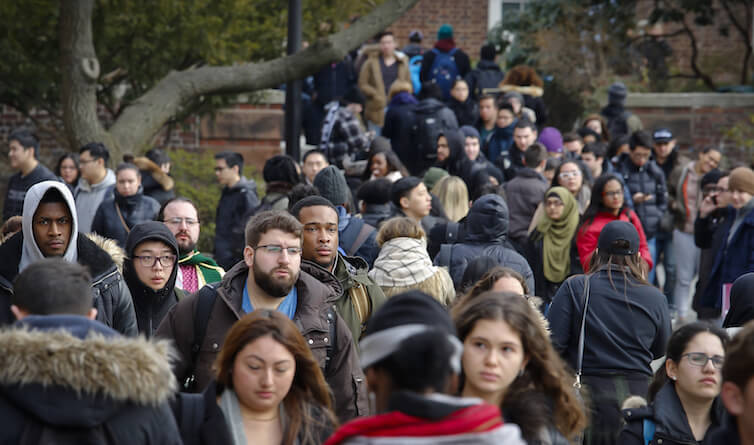 College may not be the great equalizer across race and ethnicity