State of the Union speech highlights the need for more precise data on U.S. economic growth 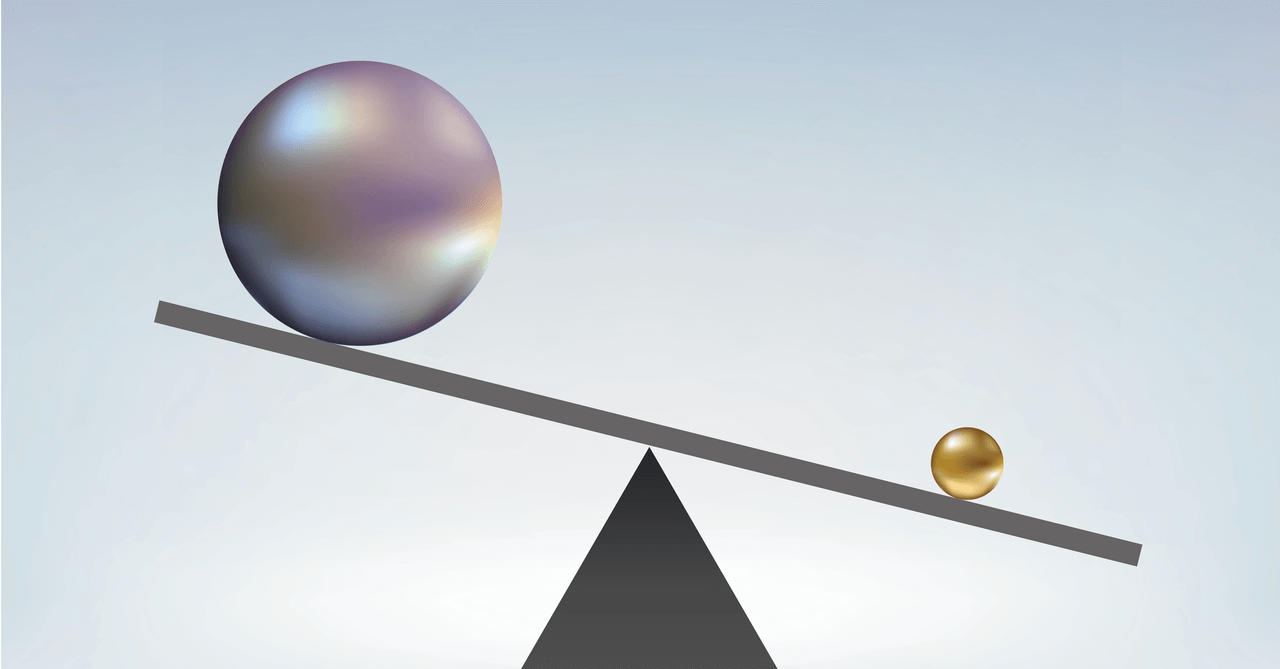 Every president uses the State of the Union address to tout positive economic developments (when they exist), and this week’s speech by President Donald Trump was no different. In doing so, he effectively, if unintentionally, made the case for changing how we measure the U.S. economy to show who benefits from economic growth—and who doesn’t.

“The U.S. economy is growing almost twice as fast today as when I took office,” President Trump said. Perhaps embellishing, he added, “And we are considered far and away the hottest economy anywhere in the world. Not even close.”

While economic growth certainly picked up speed in 2018, President Trump was relying on the single data point—growth in Gross Domestic Product—that has remained the emblem for U.S. economic health even as it has become less and less relevant to how most Americans experience the economy. Before 1980 or so, GDP growth corresponded closely to the income gains that most Americans were experiencing. In other words, it represented an average that was relevant to what was happening for most households.

That was then. Since the 1980s, research using the Distributional National Accounts dataset produced by Thomas Piketty, Emmanuel Saez, and Gabriel Zucman shows that most families—middle-income and especially lower-income—have experienced slower rises in income, or none at all, compared to GDP growth. Only one group has “beaten” the GDP figure, and that is the very wealthy. And the rise in income for the extremely wealthy has been practically off the charts. This shift has made GDP deceiving as a metric of economic progress. Figure 1 illustrates the difference between the pre-1980 and post-1980 periods for the range of incomes from very low to very high. (Note, the National Income Growth measure used in the graph is a measure of total economic output, similar to GDP growth.) 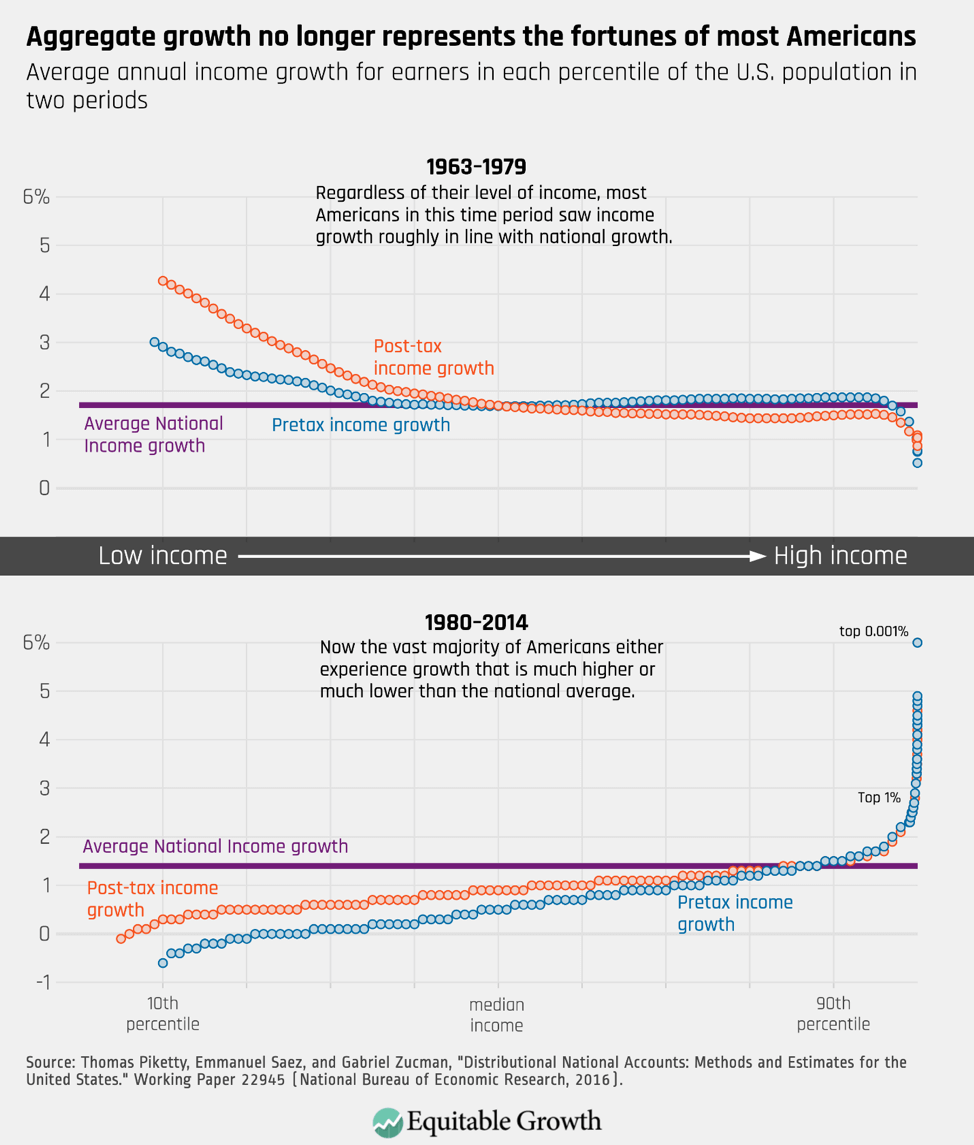 It is no coincidence that this is also a period in which economic inequality has reached historic proportions in the United States—the highest in a century—and mobility, the movement of children higher on the economic ladder than their parents achieved, has dramatically declined. This raises a question that should be fundamental for economic policymakers. If we do not measure how Americans up and down the income ladder are faring economically, how can we know how healthy the economy is?

If we want economy policies that help ensure that the benefits of growth are broadly shared and give real hope to all families no matter their economic status—and we should—then we cannot simply guess where we stand, which is effectively what policymakers do now. The federal government should measure more than GDP growth. It should measure how the benefits of growth are distributed. It is possible to make these calculations, as Figure 1 illustrates, but policymakers should not cede what should be a governmental activity to academic economists, who in any event cannot be depended upon to issue regular reports.

Unfortunately, the Department of Commerce’s Bureau of Economic Analysis, which publishes quarterly GDP figures, is unable to produce statistics like those used in Figure 1 because it does not currently have either access to the right data or an appropriate budget for the task. That would change under legislation first introduced in the last Congress by Senators Charles Schumer (D-NY) and Martin Heinrich (D-NM) and by Rep. Carolyn Maloney (D-NY). The Measuring Real Income Growth Act would require the BEA to also provide estimates of income growth for Americans in each decile of income and also for the top 1 percent.

As Equitable Growth Executive Director and Chief Economist Heather Boushey said in testimony last year before the Congressional Joint Economic Committee, “Smart stewardship of our economy in an era of high inequality requires us to start to disaggregate our topline statistics and report on economic prosperity for all Americans.” If such data help produce policies that promote broad-based growth, perhaps this or future presidents will someday be able to say that the economy is growing for all Americans, not just for a few. 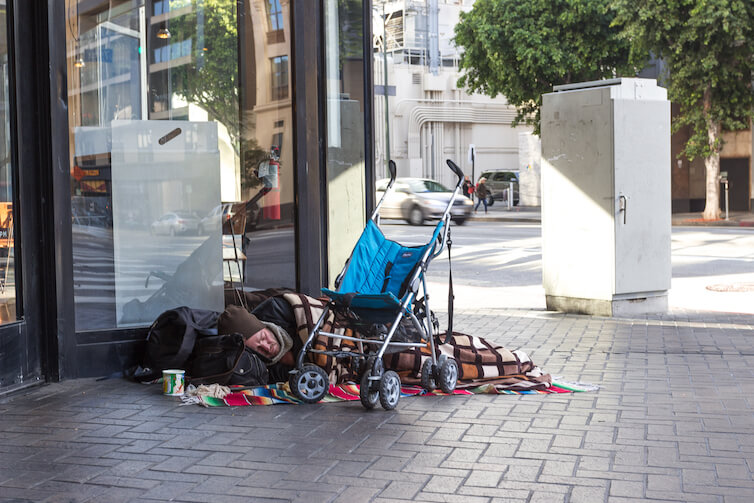