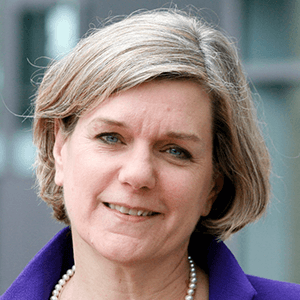 Nancy L. Rose is the Head of the Department of Economics and Charles P. Kindleberger Professor of Applied Economics at the Massachusetts Institute of Technology, where her teaching and research focus on industrial organization, competition policy, and the economics of regulation. She served as Deputy Assistant Attorney General for Economic Analysis in the Antitrust Division of the U.S. Department of Justice from 2014–2016, and directed the National Bureau of Economic Research program in Industrial Organization from its creation in 1991 until her appointment to the Department of Justice. She is a member of the American Academy of Arts and Sciences and a Distinguished Fellow of the Industrial Organization Society.

Professor Rose received her Ph.D. in Economics from MIT and an A.B. in Economics and Government from Harvard University. Her accomplishments have been recognized by numerous fellowships over her career, including those from the Alfred P. Sloan Foundation, Center for Advanced Study in the Behavioral Sciences, Hoover Institution, John Simon Guggenheim Foundation, and National Science Foundation. Her professional service includes membership on the American Antitrust Institute Advisory Board, terms as Vice President and Executive Committee member of the American Economic Association (AEA), and independent directorships on both public and non-profit boards.