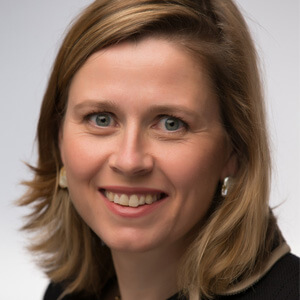 Fiona M. Scott Morton is the Theodore Nierenberg Professor of Economics at the Yale University School of Management, where she has been on the faculty since 1999. Her area of academic research is industrial organization, with a focus on empirical studies of competition in areas such as pricing, entry, and product differentiation. The focus of her current research is competition in health care markets and antitrust (competition) economics. From 2011 to 2012, Scott Morton served as the deputy assistant attorney general for Economic Analysis (chief economist) at the Antitrust Division of the U.S. Department of Justice, where she helped enforce the nation’s antitrust laws. At Yale, she teaches courses in the area of competitive strategy and antitrust economics and also directs the School’s Healthcare Initiative. She served as associate dean from 2007 to 2010 and won the school’s teaching award in 2007 and 2016. Scott Morton has a Bachelor of Arts degree from Yale and a Ph.D. from the Massachusetts Institute of Technology, both in economics.