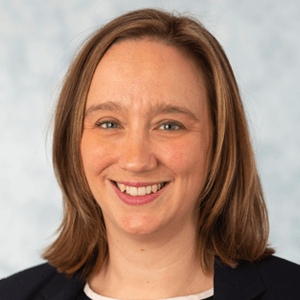 Claudia Sahm is a senior fellow at the Jain Family Institute. Previously, she was the director of macroeconomic policy at the Washington Center for Equitable Growth. She has policy and research expertise on consumer spending, fiscal stimulus, and the financial well-being of households. She is the author of the “Sahm Rule,” a reliable early signal of recessions that she developed as a way to automatically trigger stimulus payments to individuals in a recession. Sahm was also a section chief in the Division of Consumer and Community Affairs at the Federal Reserve Board, where she oversaw the Survey of Household Economics and Decisionmaking. Before that she worked for 10 years in the Division of Research and Statistics on the staff’s macroeconomic forecast. She was a senior economist at the Council of Economic Advisers in 2015–2016. Sahm holds a Ph.D. in economics from the University of Michigan (2007) and a B.A. in economics, political science, and German from Denison University (1998).

The false hope of reopening is killing small businesses

The Widening Education Gap May Tear the Economy Apart

‘A tale of 2 recessions’: As rich Americans get richer, the bottom half struggles