How not to help distressed mortgage borrowers: Evidence from the Great Recession in the United States

The federal government has been criticized by many for failing to provide adequate assistance to U.S. homeowners who were financially devastated by the housing crisis and subsequent Great Recession and its aftermath in the late 2000s. New evidence suggests that even when assistance was given, it was poorly designed to meet the needs of distressed borrowers and, as a result, failed to prevent many defaults and foreclosures.

In “Liquidity vs. wealth in household debt obligations: Evidence from housing policy in the Great Recession,” economists Peter Ganong of the University of Chicago and Pascal Noel of Harvard University study the Home Affordable Modification Program, or HAMP, which assisted 1.7 million struggling homeowners beginning in 2009. Ganong and Noel find that the program placed an inefficient emphasis on reducing borrowers’ total mortgage debt, instead of focusing on their liquidity, or the cash they had available to meet everyday needs. They show that the most important factor in preventing defaults is aggressive action to lower borrowers’ immediate monthly payments, not changing the total amount those borrowers owe.

The Home Affordable Modification Program offered homeowners who were both experiencing financial difficulties and “underwater”—meaning they owed more on their mortgage than their houses were worth—a chance to refinance their loans, reduce their mortgage interest payments, and possibly have some of their principal forgiven. Participants qualified for payment assistance, debt reduction, and debt refinancing depending on different program criteria, and similar homeowners who just missed qualifying for HAMP could apply for debt refinancing assistance from private debt servicers. By studying the outcomes of those who just barely qualified for mortgage principal forgiveness or did not, and those who just barely qualified for HAMP versus those who received private refinancing, Ganong and Noel can tell which interventions were most effective.

Unfortunately, HAMP principal forgiveness was completely ineffective at reducing defaults. The forgiveness was substantial at an average of $67,000 worth of debt. Yet borrowers with debt forgiven defaulted at the same rate as statistically similar HAMP participants who had no debt forgiven. Increasing consumption was also a broad macroeconomic goal of the federal government during the recession years, but using linked data from JP Morgan Chase & Co., the authors find that mortgage principal forgiveness also failed to have an effect on consumption in the households that received it.

HAMP did lower borrowers’ monthly payments, but only until payments reached a strict 31 percent of a borrower’s monthly income. Even when combined with principal forgiveness, this was not enough to prevent many defaults.

Private servicers shared the government’s goal of reducing borrower defaults but went about it differently. They tended to drastically lower borrowers’ monthly payments, and it seems that approach was much more effective at preventing defaults than forgiving mortgage principal. Ganong and Noel find that each additional 1 percent monthly payment reduction lowered the default rate by 0.26 percentage points. This suggests that if the Home Affordable Modification Program had used the money it spent on principal forgiveness to instead to reduce monthly payments beyond the 31 percent threshold, then HAMP would have been much more effective at keeping households solvent and families in their homes.

Though private servicers were much more aggressive than the federal government in reducing initial mortgage payments, those servicers never reduced the amount owed, so average borrowers are still on the hook for massive increases in payments 20 years after refinancing. Many will need to make drastically larger monthly payments to pay off their mortgages, or else further lengthen their mortgage terms (most private servicers already extended mortgage terms by many years). (See Figure I, which appears in Ganong and Noel’s working paper.) 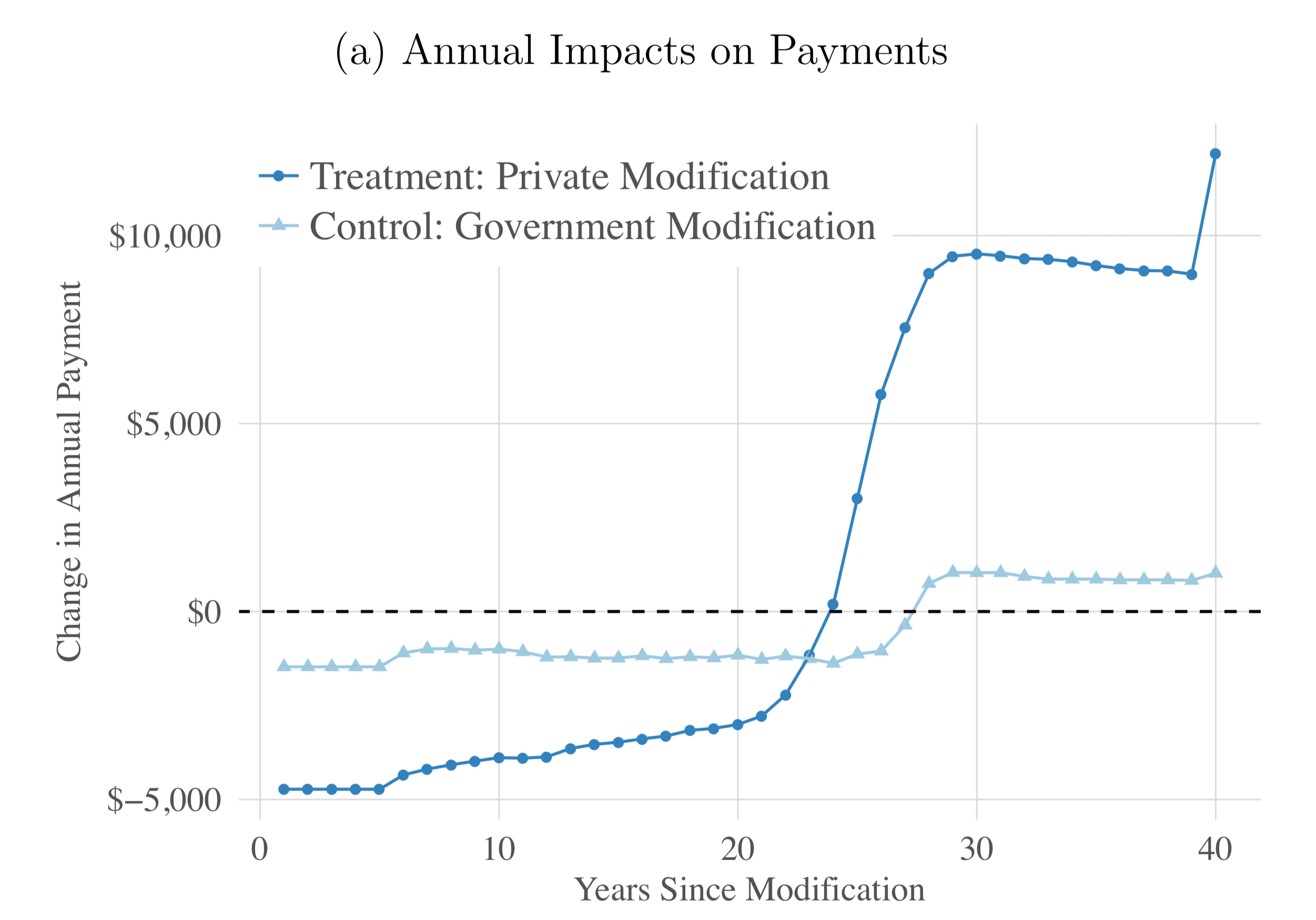 Those borrowers who chose to refinance rather than face that large payment cliff could be facing an entire lifetime of mortgage payments. Only 10 years out from the crisis, it is impossible for Ganong and Noel to study the long-term implications of these decisions, but clearly, reducing payments without giving borrowers a way out of the debt they’ve accumulated carries long-term risks.

The other option for policymakers is to design government aid to be more effective. If HAMP had been designed to focus on reducing monthly payments, then “our results imply that 240,000 defaults could have been avoided at no additional cost to investors or taxpayers,” the authors say. Using a 2010 U.S. Department of Housing and Urban Development estimate of the social cost of a foreclosure ($51,000), up to $12 billion in economic damage could have been avoided simply through better program design.

Other debt payment relief programs—such as federal student loan repayment programs—recognize the need to drastically reduce distressed borrowers’ monthly payments and utilize alternate measures of ability to pay such as “discretionary income,” rather than HAMP’s strict 31 percent payment-to-income ratio. The evidence from this study suggests that policymakers confronting a future mortgage debt crisis can achieve a policy “free lunch”—a program that is a win-win-win for borrowers, lenders, and the government—by redesigning the Home Affordable Modification Program and other debt relief initiatives along similar lines.

Continuing to examine the borrowers studied by Ganong and Noel could further help policymakers understand how households manage debt and how these programs affect economic growth and stability. For instance, though debt forgiveness didn’t help borrowers in the short term, is it possible these borrowers will be better off in the long term than those who will face extra decades of debt payments? And how will the next recession be different if we give distressed households better tools to maintain their monthly liquidity? 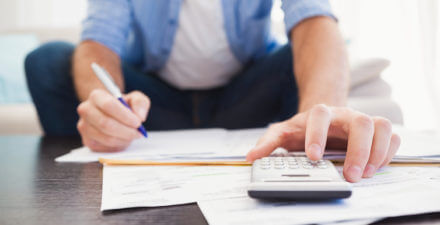 Understanding the importance of household credit in high-income economies 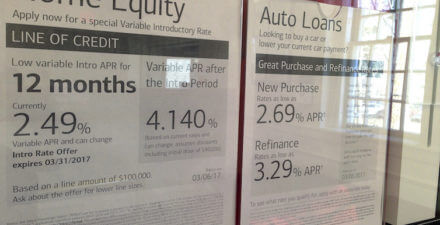 The surprisingly constant “housing wealth effect” in the United States