Amid the ongoing and growing debate about ways to reduce inequality, a new working paper shows that a wealth tax, rather than capital income taxes, would better boost efficiency, productivity, and investments in the economy. Summarizing the working paper, Somin Park explains the authors’ findings that switching to a wealth tax rewards productive investments and broadens the tax base, improving the allocation of capital and increasing output, compared to a system of capital income taxation. In effect, a wealth tax would increase economic growth while reducing consumption inequality.

As inequality concentrates more and more economic power at the very top of the income and wealth ladders, the political preferences of the economic elite are ever more relevant. A new working paper studying the partisan leanings of top CEOs shows that a majority of these executives vote for and support Republicans, Somin Park writes in a post covering the new research. The authors of the paper studied Federal Election Commission records for more than 3,800 individuals who served as chief executive officers of companies in the S&P Composite 1500 index between 2000 and 2017, and found that 57 percent were Republican, while only 19 percent were Democrats and the remainder were neutral. As Park notes, these findings are significant because the preferences of CEOs are a window into corporate political spending, which, since the Supreme Court ruling in Citizens United v. Federal Election Commission, is unlimited and is not necessarily disclosed to investors. CEOs also express their views and provide advice on policy to lawmakers, occupying an influential position in the policymaking process.

The U.S. Bureau of Labor Statistics this week released the August data from the Job Openings and Labor Turnover Survey, or JOLTS. Raksha Kopparam and Austin Clemens produced four graphs using the data, which demonstrate that job openings declined slightly in August, as did the quits rate and the rate of hires per opening.

And finally, check out Brad DeLong’s latest worthy reads for his takes on must-see content from Equitable Growth and around the web.

In 2018, for the first time in the history of the United States, the richest of the rich Americans paid a lower effective tax rate than the working class, writes Christopher Ingraham in a Washington Post article covering a new study by Emmanuel Saez and Gabriel Zucman of the University of California, Berkeley. More specifically, the study finds that the richest 400 families in the United States paid an average effective tax rate of 23 percent, while the bottom 50 percent of American households paid an average rate of 24.2 percent. Saez and Zucman attribute the shocking results of their study to decades of top income-tax rate cuts, slashed capital gains and estate tax rates, and an inadequate IRS enforcement budget, as well as the Tax Cuts and Jobs Act of 2017, which lowered the top income tax bracket and slashed the corporate tax rate.

In light of this, maybe we should take Annie Lowrey of The Atlantic’s suggestion—to “cancel billionaires”—more seriously. It isn’t just that the increase in inequality has left too many with too little, she writes, while noting that this is certainly a troubling trend. But inequality is also changing the very nature of our society, our economy, and our country. Lowrey describes exactly how inequality constricts mobility, damages human capital, stifles innovation, drags down growth, and endangers our political system. She concludes that a wealth tax could be a way to both pay for programs for the poor and “[reduce] the incentive for the rich to soak up all that money in the first place … pushing the steps of the income ladder closer together to make them easier to climb.”

As the rich become richer and the middle class stagnates, families face many more hurdles than they used to in their quest to achieve the American Dream. With rising costs of housing, healthcare and childcare, and education, and increasingly demanding jobs that pay less for the same or more work, “middle-class families are working longer, managing new kinds of stress, and shouldering greater financial risks than previous generations did,” write Tara Siegel Bernard and Karl Russell in The New York Times. They go on to examine in detail four families from different corners of the United States, as well as their monthly budgets, to illustrate the challenges these households—and millions more like them across the country—face as they work to enter or stay in the middle class.

And considering the increased cost of childcare in recent years, should we start paying stay-at-home parents for their hard work? The idea has bipartisan support, writes Claire Cain Miller in The New York Times Upshot blog, with social conservatives endorsing its support of traditional families and progressives rallying behind the recognition of the economic value of unpaid domestic labor. While both sides certainly also take issue with the idea for different reasons, and there are various takes on how to go about doing it, people can agree on one thing: Children need care, and families usually take some kind of financial hit to provide it, whether it’s leaving a job to provide it yourself or paying someone else to do so. 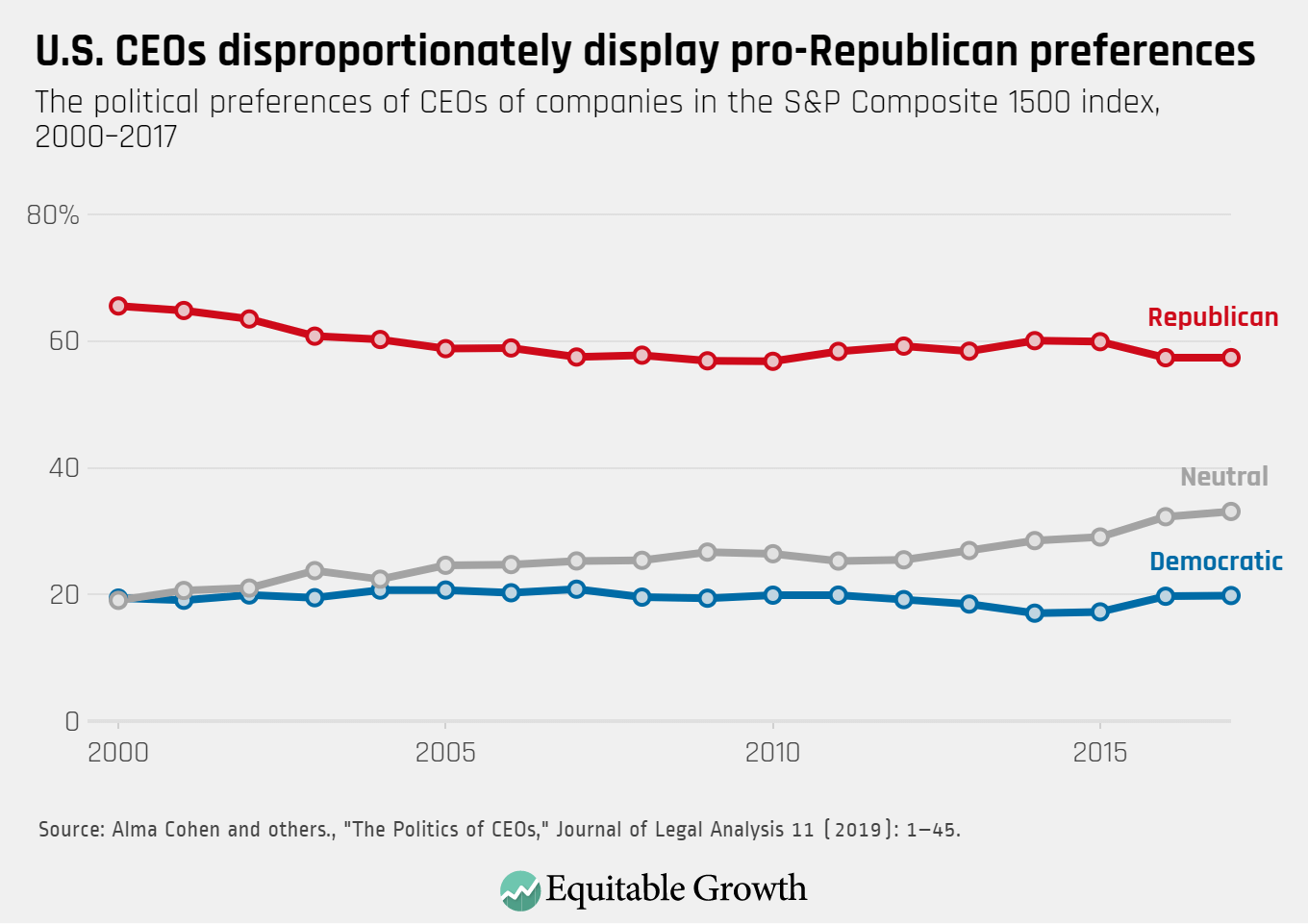 Figure is from Equitable Growth’s “The political influence and preferences of the U.S. economic elite,” by Somin Park.