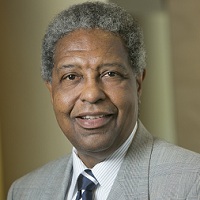 Darity’s research focuses on inequality by race, class, and ethnicity, stratification economics, schooling and the racial achievement gap, North-South theories of trade and development, skin shade and labor market outcomes, the economics of reparations, the Atlantic slave trade and the Industrial Revolution, the history of economics, and the social psychological effects of exposure to unemployment.

He was a visiting scholar at the Russell Sage Foundation (2015-2016), a fellow at the Center for Advanced Study in the Behavioral Sciences (2011–2012) at Stanford University, a fellow at the National Humanities Center (1989–90), and a visiting scholar at the Federal Reserve’s Board of Governors (1984). He received the Samuel Z. Westerfield Award in 2012 from the National Economic Association, the organization’s highest honor. He is a past president of the National Economic Association and the Southern Economic Association. He also has taught at Grinnell College, the University of Maryland, College Park, the University of Texas at Austin, Simmons College, and Claremont-McKenna College.

Darity holds a B.A. from Brown University and a Ph.D. from the Massachusetts Institute of Technology.

Conversation with William A. “Sandy” Darity, Part One