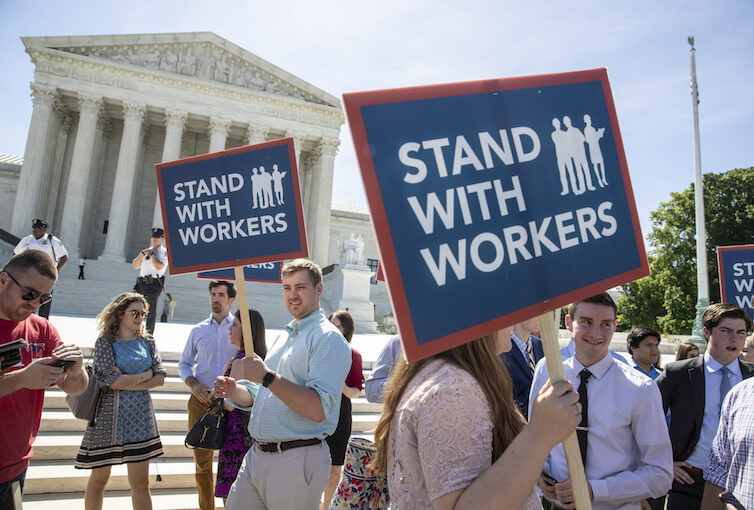 Labor Day, this coming Monday, is a time to reflect on the decline of the American labor movement and its impact on all American workers. Union density stands at just higher than 10 percent as of the end of 2017, down from nearly one-third of households in 1950. Alongside this decline in worker bargaining power is the rise of economic inequality, stagnating wages, and a declining share of national income accruing to workers. And in light of the recent U.S. Supreme Court decision in Janus v. American Federation of State, County and Municipal Employees, unions and economic justice movements are considering where to go from here.

The economic benefits of unions have been established through evidence from quantitative research, but unions have been largely unable to meet the challenges of the modern labor market despite their presumed ability to raise wages in an era of wage stagnation. The reason: U.S. labor laws are out of date for protecting workers from the changing nature of work and fostering greater bargaining power through collective action. Union activism in the early 20th century resembles what we today consider economic justice movements and led to the adoption of economywide labor standards such as the weekend and the eight-hour workday. But the current labor law framework for union organizing, established by the National Labor Relations Act in 1935, was developed for another economic era, dominated by “traditional” employment relationships—workers directly employed by a firm that oversaw their work product. In this once-successful setup, union collective bargaining vis-à-vis employers largely took place within each workplace.

The current labor market, however, is characterized by a fissured workplace, including gig-based employment and employers’ power to set wages below competitive levels and deter union organizing. These developments occurred as the political and regulatory landscape became increasingly hostile to the labor movement, for example through incidents such as the pivotal PATCO air traffic controllers strike busted by President Ronald Reagan in 1981. In order to extend the economic benefits of increased bargaining power for workers, the legal landscape today needs to respond to the current structure of the economy and engage workers as key stakeholders in order to rebalance both economic and political power for a more dynamic and equitable labor market.

Legal scholar Kate Andrias at the University of Michigan School of Law writes in The Yale Law Journal paper on “the New Labor Law” that “labor law developed for the New Deal does not provide solutions to today’s inequities.” She contends that the NLRA is fundamentally ill-equipped to interact with the changing structure of the modern labor market since it does not hold accountable actors along the value chain in a fissured workplace. A recent joint employer case against McDonald’s Corp., for example, sought to hold the corporation responsible for employment outcomes at franchises, but the outcome remains in legal limbo. And concerns about gig-based employment, where workers are technically independent contractors, cannot be addressed through traditional labor protections.

A legal landscape that protects workers’ interests is ever-more important to address, given the current economic disparities and trends that disadvantage workers. Evidence shows us that labor regulation and protections influence macroeconomic economic outcomes as well. In a new working paper published by the International Monetary Fund, Gabriele Ciminelli of the University of Amsterdam and Romain Duval and Davide Furceri of the IMF examine how employment-protection regulation affected the share of national income accruing to labor across 26 advanced countries. The researchers find that rolling back labor protections led to a decreased labor share over the period between 1970 and 2015. Unions are crucial actors in establishing and maintaining protections that benefit workers, both within individual workplaces, as well as for the entire workforce.

To address these issues, the University of Michigan’s Andrias supports a tripartite system, in which bargaining involves the state in the bargaining process and takes place at a higher level, also known as sectoral and industry-level bargaining. Andrias calls this process “social bargaining.” This would help address some of the fundamental benefits of unions in determining the conditions of work. In addition, Kimberly Sanchez Ocasio and Leo Gertner of the Service Employees International Union, in their review of Andrias’ “The New Labor Law,” look to social movements led by low-wage workers to revive labor’s clout in the United States. They point to the coordination between “Fight for Fifteen” and “Black Lives Matter” in protesting the killing of Michael Brown in Ferguson, Missouri, and advocate for what they call “common-good unionism.” They write that “a broad conception of worker welfare is emerging that moves beyond wages and benefits for its members, taking on the root causes of structural economic inequality.”

Economic research shows that unions have been a crucial force in balancing economic inequality, yet unionism must evolve with current economic structures in order to foster broadly shared economic growth. This is the mission behind Harvard Law School’s Labor and Worklife Program’s new “Clean Slate” effort to reform labor law to address today’s economic structures and trends. The Labor and Worklife Program is establishing a home base to work on ideas that not only reinvigorate America’s unions but also get to the root of why we need the labor movement to address U.S. economic inequality, as well as political disenfranchisement of low-income people. This “Clean Slate” effort kicked off with a day-long convening in July to ask the first question, “what problems should we be solving for?”

The intersection of economic research and legal scholarship can help point the way for the future of labor law in the United States. Legal scholarship can apply evidence from economics to determine what changes to our legal structure are needed to protect workers effectively and balance bargaining power, and subsequent advancements to labor law, as well as employment law and civil rights law, can help ensure more equitable economic growth.

The steep path forward for unionization