One of the clearest manifestations of growing economic inequality in our nation today is the widening educational achievement gap between the children of the wealthiest and the children of everyone else. At first glance, this sounds like an obvious outcome. After all, wealthier families are able to afford expensive private schools, or homes in wealthy public school districts with more educational resources.

But a closer look at this education achievement gap over the past 50 years or so shows that the gap only began to widen in the 1970s, right about the time that wealth and income inequality in our nation also began to grow. The past 30 years have seen a sustained rise in inequality in wages, incomes, and wealth, leading to more and more income and wealth accruing to those at the top of the economic ladder, pulling the rich further away from those on the other rungs.1

At the same time, the growing educational gap became ever more apparent. In the 1980s, the gap between the reading and math skills of the wealthiest 10 percent of kids and poorest 10 percent was about 90 points on an 800-point SAT-type scale.2 Three decades later, the gap has grown to 125 points. This widening gap is largely due to differences in how well prepared children are for school before they enter kindergarten or even pre-kindergarten.3 In this era of economic inequality, wealthier parents have far more resources, both in terms of time and money, to better prepare their children to succeed in school and later in life.

This widening educational achievement gap may threaten our future economic growth. With only a select few individuals receiving the best education and enrichment, we are not effectively developing the economic potential of our future workforce. To grow our economy we must provide educational and enrichment opportunities for children across the income spectrum, rather than only a select few at the top.

Wealth and income largely define the educational gap today, more so than race and ethnicity. In the 1950s and 1960s, the opposite was true. Back then, racial discrimination in all aspects of life led to deep racial inequality. Economic inequality, in contrast, was lower than at any time in U.S. history, according to extensive research done by economists Thomas Piketty at the Paris School of Economics and Emmanuel Saez at the University of California, Berkeley.4 But anti-discrimination and civil rights legislation and school desegregation led to improved economic, social, and educational conditions for African Americans and other minorities beginning in the late 1960s. As a result, the gap today between white and black children is about 70 points on an 800-point SAT-type scale, 40 percent smaller than it was in the 1970s, and about half the size of the gap between rich and poor children, but still unacceptable.5

The growth of the socioeconomic achievement gap appears to be largely because more affluent parents are increasingly investing more time and money in their kids’ educational enrichment—and at earlier periods in their children’s lives—than hard-pressed low-income and middle class families.6 Indeed, surveys show that the amount of time and money parents invest in their children has grown sharply over the past four decades among both affluent and non-affluent parents. But the increase in these investments has been two to three times greater among high-income families.7 Economists Richard Murnane of Harvard University and Greg Duncan at the University of California-Irvine find that between 1972 and 2006 the amount high-income families spent on their children’s enrichment activities grew by 150 percent, while the amount spent by low-income families grew by 57 percent.8 In part, parents are spending more on their kids because they understand that educational success is increasingly important in today’s uncertain economic times, a point that sociologist Marianne Cooper at the Clayman Institute makes in her recent book “Cut Adrift.”9 But low- and middle-income families can’t match the resources—both the money and flexible time—of the rich.

As a result, rich and poor children score very differently on school readiness tests before they enter kindergarten. Once they are in school, however, the gap grows very little—by less than 10 percent between kindergarten and high school.10 Thus, it appears that the academic gap is widening because rich students are increasingly entering kindergarten much better prepared to succeed in school than low- and middle-class students. To be sure, there are important differences in the quality of schools serving low- and high-income students, but these differences do not appear to be as salient as the differences in children’s experiences prior to kindergarten.

The socioeconomic education gap is likely to affect us for decades to come. Think of it as a leading indicator of disparities in civic engagement, college enrollment, and adult success. Indeed, family income and wealth have become increasingly correlated with a variety of positive adolescent activities, such as sports participation, school leadership, extracurricular activities, and volunteer work, according to research conducted by Harvard University political scientist Robert D. Putnam and his colleagues.11

Not only are the children of the rich doing better in elementary and high school than the children of the poor, they also are cornering the market on the seats in the best colleges. In a study that I conducted with several of my graduate students, we found that 15 percent of high-income students from the 2004 graduating class of high school enrolled in a highly selective college or university compared to only 5 percent of middle-income graduates and 2 percent of low-income graduates.12 Because these colleges provide educational opportunities and access to social networks that often lead to high-paying jobs, children from low-income families risk are being locked out of the upper end of the economic spectrum. For low-income children, the American Dream is further out of reach.

This is bad news for our future economy and society because we need well-educated workers in order to sustainably boost economic productivity and grow the economy. So how can we prepare every child, not just those most affluent ones, to be productive members of society? First of all, we must acknowledge that educational problems cannot be resolved by school alone. The achievement gap begins at an early age. To close it, we must invest in children’s early childhood educational opportunities. This means investing not only in preschool but also in parents. Specifically, we need to:

In short, we can narrow the socioeconomic education gap through public policies that help parents of all incomes provide enriching educational opportunities for their children in the way that only affluent parents can do today.

5. Reardon, “The Widening Academic Achievement Gap Between the Rich and the Poor: New Evidence and Possible Explanations.” 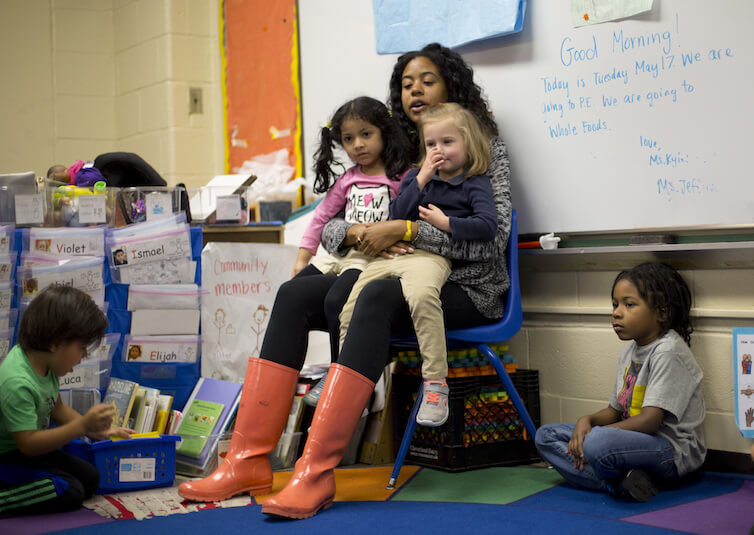