Weekend reading: “where are the wages?” edition

Elisabeth Jacobs discusses California’s comprehensive paid family leave policy and how since the policy was enacted in 2004 there has been an 11 percent decline in nursing home utilization.

Earlier this week, the U.S. Bureau of Labor Statistics released the newest data from the Job Openings and Labor Turnover Survey covering the month of May. Kate Bahn and Austin Clemens put together four graphs utilizing JOLTS data.

Dionna Cheatham and Iris Marechal explain a recent research paper that finds there are respiratory health disparities between different socioeconomic, racial, and ethnic communities. They detail how disadvantaged communities live in areas where they are more exposed to adverse environmental conditions. They argue that worsening respiratory health results in job insecurity due to limited paid leave and job schedule flexibility.

Somin Park recapped the Work and Family Researcher’s Network’s bi-annual conference held this past June, where Equitable Growth Executive Director and Chief Economist Heather Boushey spoke on connecting research to policy debates by establishing strong relationships with policymakers to help them understand the connection between certain research and their specific policy goals.

Equitable Growth economist Kate Bahn and co-authors Meg Benner, Erin Roth, and Stephenie Johnson published a report for the Center for American Progress analyzing  teachers’ salaries and the effects of increasing teachers’ wages on job tenure, student achievements, and diversity. The authors advocate for a $10,000 Teacher Tax Credit, arguing it would give teachers economic stability to make long-term financial decisions as well as help provide low-income students with higher-quality education.

Six months after the passage of the 2017 Tax Cuts and Jobs Act, data show that while corporations argued that they’d pass along the tax cut benefits through higher wages, they’ve held onto those benefits. Jason Furman, Harvard Kennedy School professor and Equitable Growth Steering Committee member, states that the corporate tax cut needs to improve wages in order for the tax changes to benefit the lives of U.S. workers. [the hill]

For the first time in 20 years, there are more job openings than unemployed workers in the United States, yet wages haven’t been improving over the past year. Minor wage growth coupled with low inflation resulted in a decline in real hourly earnings for a majority of laborers compared to May 2017. A new report from the Organisation for Economic Co-operation and Development points to a political explanation for this sluggish wage growth: U.S. policymakers have chosen policies that direct economic growth to shareholders rather than workers. [nymag]

In the city of Des Moines, Iowa, near-full employment has increased labor competition, forcing employers to seek labor outside of the standard application pool. Formerly incarcerated residents, retirees, and high-school graduates have access to training programs that allow them to be competitive applicants and workers, providing opportunities to negotiate for higher wages. [atlantic]

The office of Washington State’s attorney general came to an agreement with seven major fast-food and restaurant chains to prohibit “no-poach” clauses in their employee’s contracts. No poach previsions prevent employees from transferring within individual food chains. These rules prevent low-wage workers from working more hours, getting promoted, or experiencing greater labor mobility among these chains and franchisee-owned stores. [nyt] 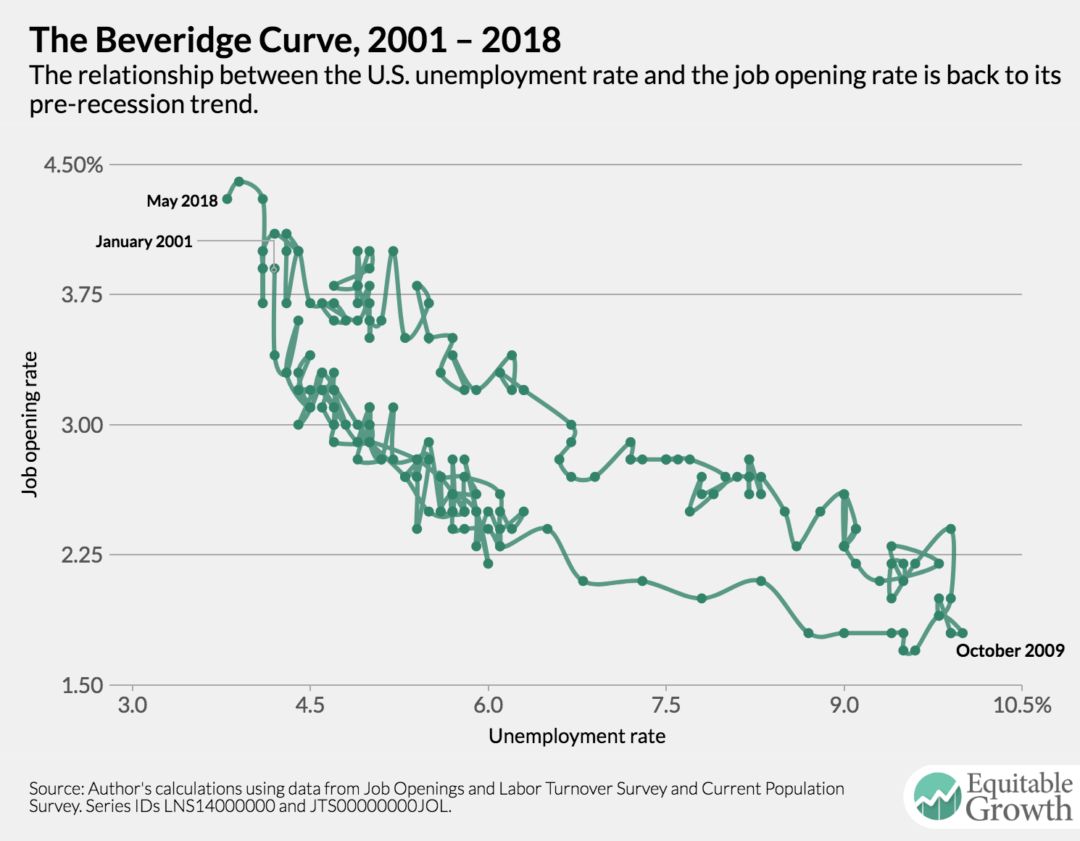 Figure is from “JOLTS Day Graphs: May 2018 Report Edition”