Need a refresher on the difference between wealth inequality and income inequality, and why intergenerational transfers of wealth are contributing to inequality? Look no further than Liz Hipple’s conversation with Fabian Pfeffer, an associate professor of sociology at the University of Michigan in Ann Arbor. Hipple and Pfeffer discuss topics ranging from racial disparities in wealth transfers across generations to the psychological processes of intergenerational transmission of wealth to how to use policy to ensure more equitable intergenerational transfers of wealth. Pfeffer’s research also touches on multigenerational wealth transmission, or grandparent-to-grandchild transfers, which, it turns out, may predict grandchild educational outcomes. “Children with parents who are similar on many, many observable characteristics are still distinct in their educational achievements depending on their grandparents’ wealth level,” Pfeffer says. “Racial disparities in wealth transmission are also stark once you expand beyond just two generations.”

This week, Brad DeLong shared his takes on two weeks of Worthy Reads from Equitable Growth and around the net.

Inequality has been growing steadily in the United States for decades, to the point that in some areas of the country, the gap between the rich and the poor is reaching Roaring Twenties levels. This extreme inequality is the result of globalization policies and conscious choices made by elected leaders and the courts, writes Abby Kingsley for FastCompany. But which policy decisions, exactly, had a real impact on inequality, and when? Kingsley and her colleagues “looked through archives, examined economic programs, and [spoke] to experts in labor, trade, law, and tax policy to identify key points where policymakers chose to create inequality.” Their in-depth timeline, going back to 1949, lays out the case for how we got to this point.

Inequality may also persist because of vast power differentials between rich and poor. This has led to widening gaps in pay, supposedly based on skill level or productivity, but in reality, “skills that really matter in the workplace are much more evenly distributed than many people assume. Most low-wage workers are underpaid relative to their measured intelligence and personality traits, and many of the highest paid professionals—including doctors, lawyers, and financial managers—are overpaid according to the same metrics,” writes Jonathan Rothwell for The New York Times’ The Upshot blog. In fact, he argues, if workers were paid based on traits such as cognitive ability, years of experience, conscientiousness, and emotional stability—which he shows are evenly distributed across the population—then the United States would be as egalitarian as Sweden. And that’s without high-quality education and skills training being available to everyone.

“Democrats have a clear theory of how they’ll make the economy fairer, but do they have a theory for making it grow faster?” asks Emily Stewart for Vox. Progressives have spent a good deal of time figuring out how to redistribute resources to make the economy work for everyone, but now are looking at ways to make the markets themselves more fair, not just the benefits that markets produce. Stewart runs through how to differentiate between redistribution and growth, potential policy changes to boost innovation and productivity, and how now is a good time for progressives to be proposing these big ideas. 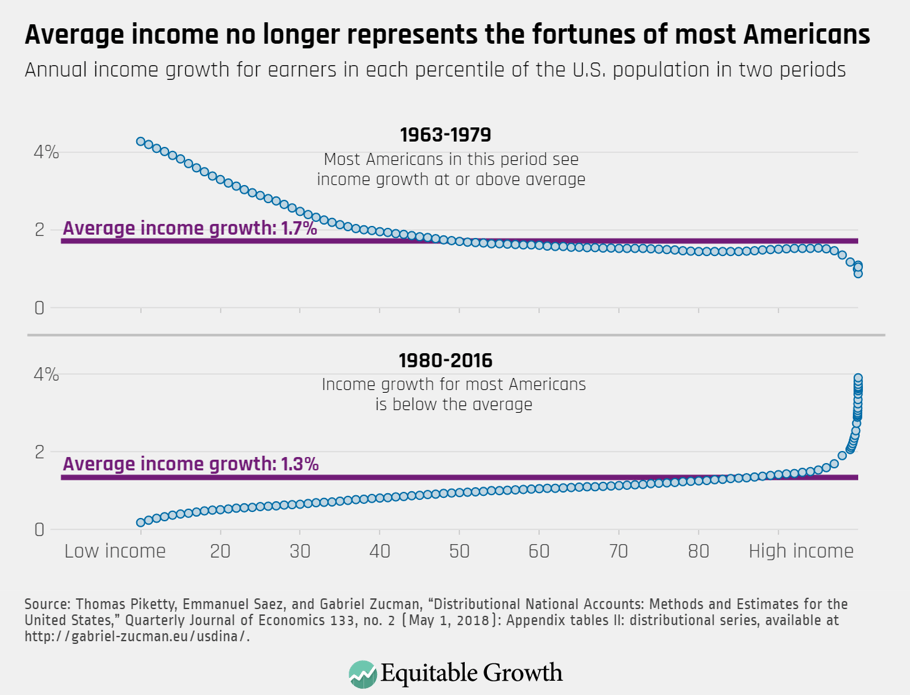 Figure is from Equitable Growth’s “GDP 2.0: Measuring who prospers when the U.S. economy grows” by Austin Clemens.