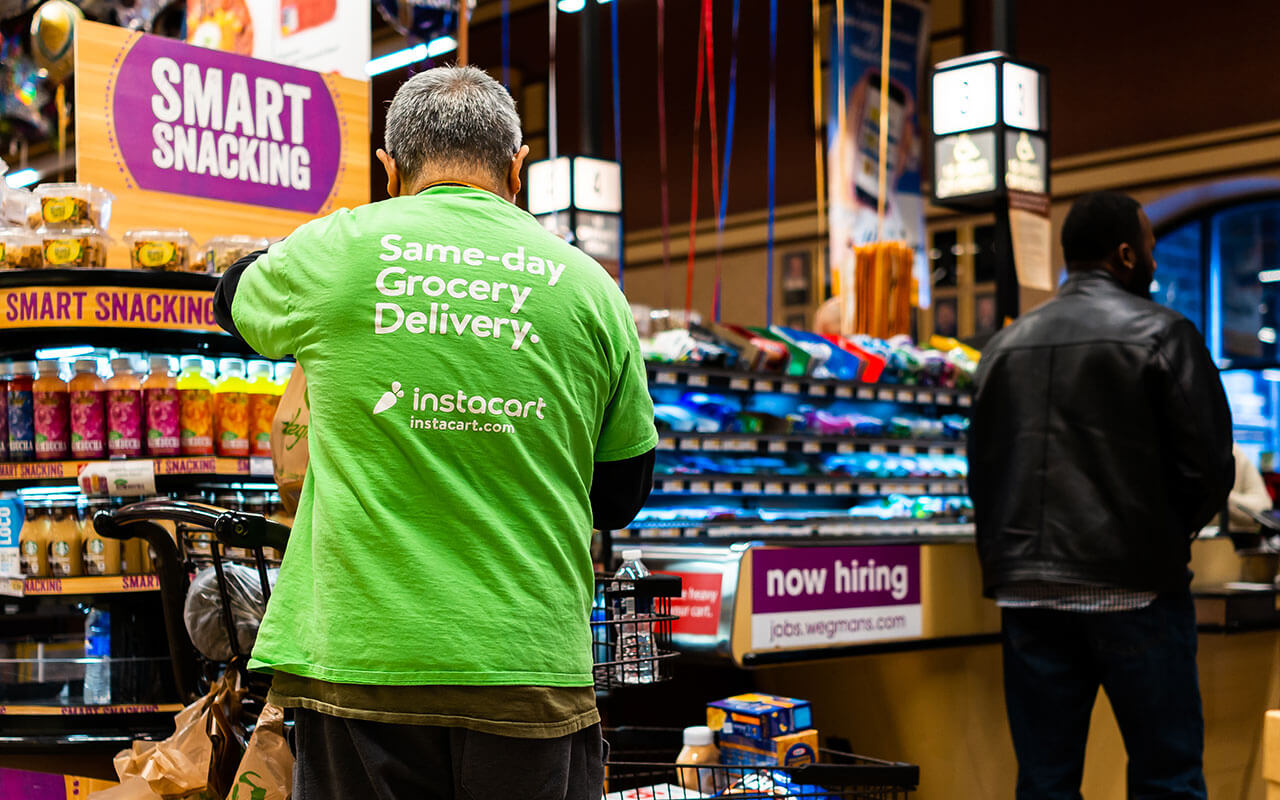 The mandatory public health measures to control the spread of COVID-19 are deepening the effects of the coronavirus recession. More than 17 million workers are now seeking Unemployment Insurance benefits, 42 states plus Washington, D.C. and Puerto Rico are under shelter-in-place orders, and the U.S. Congress, Federal Reserve, and Trump administration are undertaking unprecedented efforts to cushion the economic blow. According to estimates by the Washington Center for Equitable Growth’s Director of Macroeconomic Policy Claudia Sahm, the U.S. unemployment rate reached 14 percent in early April.

Though the coronavirus recession is affecting most workers, the 7 percent of the U.S. labor force who are classified as independent contractors are among the most at risk because of their lack of any of the basic building blocks of the labor safety net. For instance, they are not:

One notable exception is that for the first time in history, the Coronavirus Aid, Relief, and Economic Security, or CARES, Act established temporary eligibility rules for pandemic Unemployment Insurance benefits for independent contractors. Most states, however, are not currently accepting claims from independent contractors and other self-employed workers, leaving behind thousands of workers who are now suffering. This is a result of an unprecedented volume of incoming claims, years of lowering employers’ tax burdens at the expense of robust unemployment systems, and confusing guidance from President Trump’s Department of Labor, the last of which seems to exclude many independent contractors that the law sought to make eligible.

Notwithstanding the important expansion of Unemployment Insurance, independent contractors are among the most vulerable during the coronavirus recession. Many independent contractors provide face-to-face services. They are either the workers most exposed to the new coronavirus on the job—such as home care aides and food and last-mile delivery workers—or most likely to be out of work without a safety net—as with workers such as ride-hailing drivers, artists, and hairdressers. Despite being classified as essential, those in the first group often lack the most basic rights and protections, such as sick leave or health insurance. Because they are at the frontlines, they and their families are at particular risk of getting sick.

The coronavirus recession is therefore making already precarious working conditions even more insecure. Research shows that self-employed workers at the bottom of the income scale tend to be worse-off than comparable workers in traditional employment relationships. Platform-based “gig-workers” providing in-person services—generally a subset of self-employed independent contractors—are disproportionately people of color and from low-income backgrounds. This means that the workers most affected by layoffs or lack of access to benefits are also among the least likely to have the financial cushion needed to weather this crisis. (See Figure 1.) 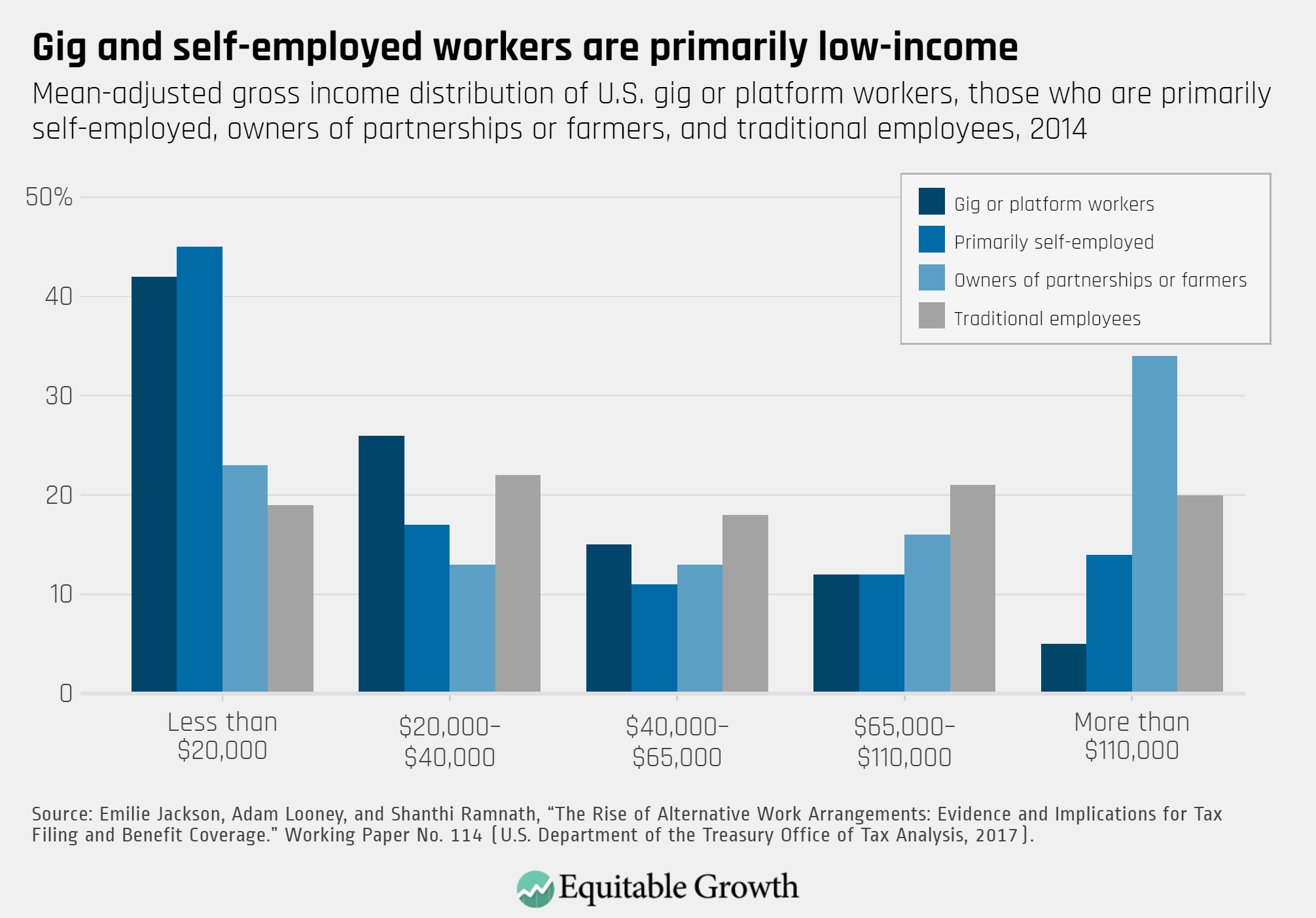 Like workers at Amazon.com, Inc., Amazon’s grocery store subsidiary Whole Foods, and McDonalds Corp., many independent contractors are fighting for better working conditions in this crisis. In late March, independent contractors at Instacart, a service that picks out and delivers groceries to subscribers, held a nationwide strike demanding that the platform provide them with basic protective gear, hazard payment, and a fair sick leave policy. Just a few days before that, workers protested in front of Uber Technologies Inc.’s headquarters in San Francisco, where drivers called for the enforcement of Assembly Bill 5, or AB 5.

Implemented in January 2020, AB 5 closes major regulatory loopholes in U.S. labor law, making it more difficult for employers to misclassify workers as independent contractors. In doing so, the law limits firms’ ability to rely on business models based on low labor costs, holding them accountable for providing their workers with benefits, rights, and protections. Though these efforts to re-classify gig workers as employees have been slow-moving and met with big pushback from gig employers, AB 5 can serve as a model for the nation.

Independent contractors’ lack of the right to form a union or collectively bargain translates into lower earnings, lack of access to benefits, and more exposure to workplace violations such as wage theft and sexual harassment. Any attempt to collectively bargain would likely violate the Sherman Antitrust Act, which specifically exempts unions for employees from antitrust rules, but this exemption does not apply to independent contractors. Therefore, if independent contractors banded together to raise their pay, they could be illegally colluding to raise prices—another way that current law actually protects companies from their workers.

Policies to help independent contractors through the coronavirus recession and beyond

For all these reasons, this crisis is expected to worsen the already insecure economic standing of low-wage contractors. But there are things that policymakers can do, in addition to passing laws such as AB 5, to make sure that these workers are not left out.

First, this is a public health emergency, but few independent contractors have the right to earn sick leave or medical leave. The Families First Coronavirus Response Act, the first emergency legislation passed by Congress, allows contractors to qualify for a tax credit if they themselves have coronavirus or have certain caregiving responsibilities, but many others must make an excruciating decision between badly needed income and endangering their health and others’ in this pandemic. While more than 75 percent of all workers have access to paid sick leave and paid vacations, no independent contractors have these benefits unless they live in a state which allows them to buy into its paid medical leave system. Establishing these protections for everyone, without regard to employer, would make us all healthier.

Third, and most importantly, independent contractors need the right to organize themselves into a labor union so they can take collective action to raise their pay, benefits, and working conditions. If they were able to unionize, then gig workers could bargain for more protective equipment to prevent the new coronavirus from spreading the COVID-19 disease to them or from them to others—one of the key demands currently going unmet. The PRO Act, recently passed by the U.S. House of Representatives, would update the law to provide these workers with expanded rights to form a union.

The coronavirus recession has exposed how decades of growing income inequality, the deterioration of worker protections, and labor laws hostile to unions render workers and the entire U.S. economy much more vulnerable to public health crises and economic downturns. The recovery from this recession will be both quicker and more complete if policymakers act to help the most vulnerable workers, since the hardest hit are also the ones with the consumer power most needed to help the U.S. economy bounce back. Moreover, doing so permanently will help ensure that on the other side of this recession, our economy is both more equitable and more resilient.

Anyone out of work can find their state unemployment program’s information at this link and determine if they qualify for benefits.