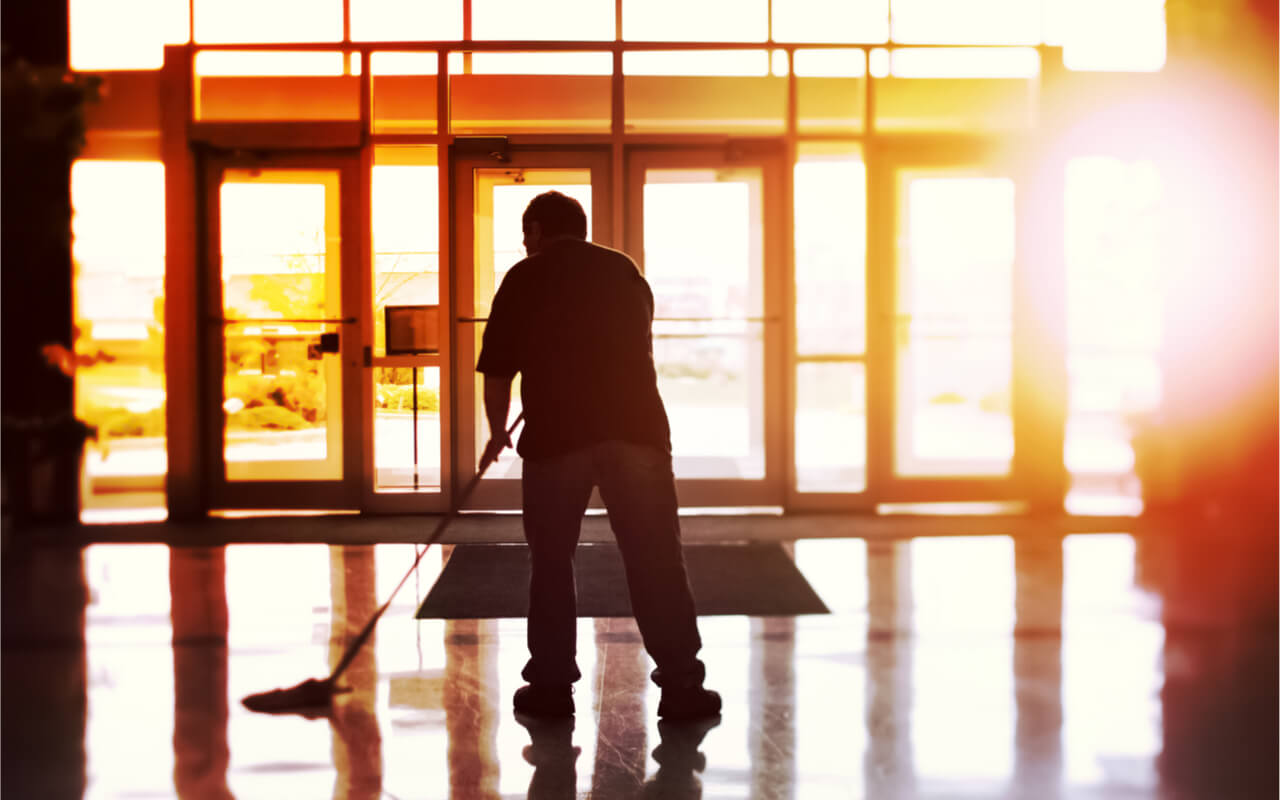 The domestic outsourcing of jobs in the United States is fast becoming a dominant explanation for the destruction of the social contract of work, a historic concept in which norms of fairness and solidarity between firms and their employees played a major role in wage setting and workplace standards for some U.S. workers—though of course many others such as African American workers were consistently more marginalized. The destruction of this social contract, detailed in Brandeis University economist David Weil’s book The Fissured Workplace, describes a labor market structure in which workers are employed at firms with core competencies and then those firms subcontract out all other duties or specific functions in the production process.

Within daily work activities, U.S. workers may directly interact with other workers across a variety of firms with different levels of job quality. One prototypical example is janitorial work, where most office cleaners today are employed by a janitorial services company that is contracted by the building owner where individual office places lease their space. These kinds of fissured employment patterns have led economists and other social science researchers to examine a variety of empirical research questions about what has caused domestic outsourcing, what the impacts have been and for whom, and what the future of the firm will be.

This body of research lays the groundwork for U.S. policymakers to understand the impact of this domestic outsourcing phenomenon and what sort of policy solutions can ensure that economic prosperity is broadly shared as workers and firms alike consider “the future of work” in the United States. A good place to start is a 2016 literature review published by the Center for Economic and Policy Research—written by Director of University of California, Berkeley’s Labor Center Low-Wage Work Program Annette Bernhardt, Cornell University’s Alice Hanson Cook and Rosemary Batt, Upjohn Institute Vice President and Director of Research Susan Houseman, and Center for Economic Policy Research Co-Director Eileen Appelbaum, titled “Domestic Outsourcing in the United States: A Research Agenda to Assess Trends and Effects on Job Quality.” In their report, they define relevant terms for domestic outsourcing and describe the evidence on what has caused changes to firms’ organizational strategies, as well as the impact on workers. They draw attention to the importance of differences in organizational strategies across firms and across industries and how these differences translate into job quality.

In their review of the literature, Bernhardt, Cook, Batt, Houseman, and Appelbaum examine the supply-side and demand-side reasons for the breakdown of this relationship: Technological advancement made it easier to control and monitor decentralized outsourcing, while changes to the regulatory environment increased incentives to outsource. An overarching theme of this research has been the growing divide between high-paying jobs with good benefits and low-paying contingent jobs with limited benefits and unpredictable schedules. Recent research by Arindrajit Dube at the University of Massachusetts Amherst and Ethan Kaplan at the University of Maryland finds that outsourcing in janitorial services and security services led to a wage penalty for low-wage service occupations. This is an important concern for workers and policymakers alike, as wage stagnation, earnings volatility, income inequality, and job polarization inhibit broadly shared economic growth.

Indeed, one of the implications of outsourcing is that equally skilled workers earn very different wages depending on the kind of firm in which they work. Recent research by Equitable Growth grantees Patrick Kline at the University of California, Berkeley, Neviana Petkova at the U.S. Department of the Treasury, Heidi Williams at the Massachusetts Institute of Technology, and Owen Zidar at Princeton University estimates the extent to which profits from patents are distributed both among firms and among their workers. Their research is among the first evidence to show that while firms do pass profits derived from patents onto workers through higher wages, these increased wages disproportionately go to the highest earners. One of the researchers, MIT’s Williams, notes:

There is growing empirical evidence that firms contribute substantially to wage inequality across identically skilled workers. Put simply, how much you earn seems to depend in part on the firm at which you work as opposed to depending solely on your own skills.

This fissuring of the U.S. workplace also reinforces another increasingly recognized explanation for wage stagnation and declining job quality: increasing market concentration and monopsony. In an Equitable Growth working paper, economist Ioana Marinescu and law professor Herbert Hovenkamp at the University of Pennsylvania detail how “some mergers may be unlawful because they injure competition in the labor market by enabling the post-merger firm anticompetitively to suppress wages or salaries.” As corporations have fissured and embraced outsourcing, companies themselves have become increasingly specialized. Elizabeth Handwerker at the U.S. Bureau of Labor Statistics and James Spletzer at the U.S. Census Bureau find that occupation concentration has increased, and this concentration is correlated with the growth in wage inequality between establishments. And another recent Equitable Growth Working Paper by Elena Prager at Northwestern University and Matt Schmitt at the University of California, Los Angeles finds that hospital consolidation is correlated with declining wages for skilled health workers.

Outsourcing as a management tool may also cause monopsony-like outcomes, with a lead firm effectively setting wages and labor practices among smaller firms, even in the absence of concentrated markets. This franchise model is examined by Equitable Growth grantee Brian Callaci at the University of Massachusetts Amherst. He demonstrates how franchisor-franchisee relationships echo these trends, with franchisors exercising control over franchisees, who are compelled to maintain low labor costs and high labor monitoring. Franchising as a business model is akin to the outcomes of domestic outsourcing and often gives excessive market power to franchisors, leading to inefficient outcomes for both franchisees and workers. Similarly, Equitable Growth grantee Nathan Wilmers at MIT’s Sloan School of Management finds that large corporate buyers are able to pressure their suppliers to maintain low wages among their workers along U.S. supply chains.

As domestic outsourcing has increased, there has also been a debate about the number of independent contractors who are working in nonstandard work arrangements that reflect not only declining job quality standards experienced by low-wage workers but also jobs not subject to labor regulation. The 2017 Contingent Worker Supplement to the Current Population Survey found that the proportion of workers who were independent contractors had actually declined over the prior decade. Yet Eileen Appelbaum and Hye Jin Rho at the Center for Economic Policy Research and their co-author Arne Kalleberg at the University of North Carolina, Chapel Hill describe the limitations of this data: It surveys workers on their prior week of employment and focuses on their main job, so intermittent or secondary contingent work income would not be captured. While the degree of nonstandard work seems lower than previously believed, research does suggest that many traditionally employed workers are taking on independent contractor work or gig-based work as secondary sources of income. Understanding this work arrangement still remains an important and open question.

The advent of online platform-based gig work also may play a unique role in the organization of firms. Antonio Aloisi at the European University Institute describes how platform-based employment may not be so much a technological disruption to the production of goods and services as it is a disruption to traditional business models parallel to other phenomena in domestic outsourcing.

As the consequences of outsourcing are investigated, research also sheds light on the internal organization and dynamics of firms that may reflect the impacts of domestic outsourcing and a different social contract of work. Research on the impact of firms on income inequality by Adam Cobb at the University of Texas at Austin’s McComb School of Business finds that internal firm policies such as hiring, promotion, and compensation policies have effects on the aggregate societal level. The creation of value within firms has shifted, as technological advances and market deregulation have reduced the costs of domestic outsourcing.

Forthcoming research by UMass Amherst’s Dube, an Equitable Growth Research Advisory Board member, will explore the role of firms in wage setting, seeking to better understand the implicit and explicit rules that govern pay setting within companies and explore how these policies interact with market forces to shape the earnings distribution. Along similar lines, Equitable Growth grantee David Pedulla of Stanford University will examine the role firms may play in contributing to the gender and racial pay gaps.

Then, there’s the latest research on the so-called skills gap. The literature on the changing nature of work has often blamed declining wages and job quality in the United States on skill-biased technical change, or the supposed existence of a skills gap. This argument remains popular in policymaking, but it overlooks how the change of employment relationships, alongside the decline of unions and stagnant minimum wages, have led to the unequal U.S. labor market outcomes in today’s workplaces. In a recent Equitable Growth working paper, David Howell of the New School and UNC-Chapel Hill’s Kalleberg find that skill-biased technical change has failed to explain differences in wages within occupations. Indeed, they find that understanding polarization and declining job quality in the United States requires an examination of broad labor market conditions and institutions.

Changes in bargaining power because of the rise of firms’ monopsony power and the decline of protective labor institutions have facilitated the restructuring of employment relationships and the organization of U.S. workplaces, which, in turn, has led to higher wage inequality and worse labor outcomes for workers. Restoring bargaining power and pro-labor policies may help push back against the detrimental effects of workplace fissuring in the U.S. economy.