Why do policymakers around the world often place limits—often ill-advised ones—on their fiscal responses to financial crises? Do they act because of economic concerns about deficits and debt, or are they reacting to politics and ideology? A new working paper (and an accompanying digest here) from husband-and-wife academic duo Christina and David Romer at the University of California, Berkeley suggests that it is mainly policymakers’ perceptions of debt and budgetary constraints and their ideas about the proper role of government that limit policymakers’ stimulus spending in such downturns.

Even prior to conducting this research, Christina Romer had an insider’s knowledge of this problem. She started advising President-elect Barack Obama during the 2008 transition, when the new administration’s response to the Great Recession of 2007–2009 was being crafted, and became chair of the Council of Economic Advisors in 2009. She famously argued inside the White House for a larger stimulus than what the administration ultimately proposed. Then-National Economic Council Director Lawrence Summers dismissed Romer’s proposals for $1.8 trillion, and then $1.2 trillion, in stimulus as too politically untenable even to present to the president.

Most economists now agree that the roughly $800 billion stimulus bill passed by Congress in 2009 was too small to fully counter the magnitude of the worst recession since the Great Depression.

The Romers’ new paper is not based on Christina Romer’s anecdotal experience, but rather looks at financial crises (defined as recessions that are caused by paralysis in the financial system) in 30 developed economies over the past four decades. They use statistical and narrative evidence to chart the relationship between “fiscal space” (as measured by the country’s precrisis debt-to-Gross Domestic Product ratio), the fiscal response (as determined by the tax and spending changes policymakers enacted in response), and how bad the recession turned out to be (how much economic output was lost). It is an extension of previous work by the couple that contained similar analysis, but this new paper adds several more recent examples, bringing the number of severe financial crises studied to 22.

This question is important to federal policymakers in Washington because an economic recession is inevitable, even though few economists are predicting a repeat of the 2008 financial crisis anytime soon. The Romers’ paper also is timely because when the next U.S. recession does hit, the Federal Reserve’s policy options will be limited by today’s historically low interest rates, which have held throughout the expansion. (See Figure 1.) 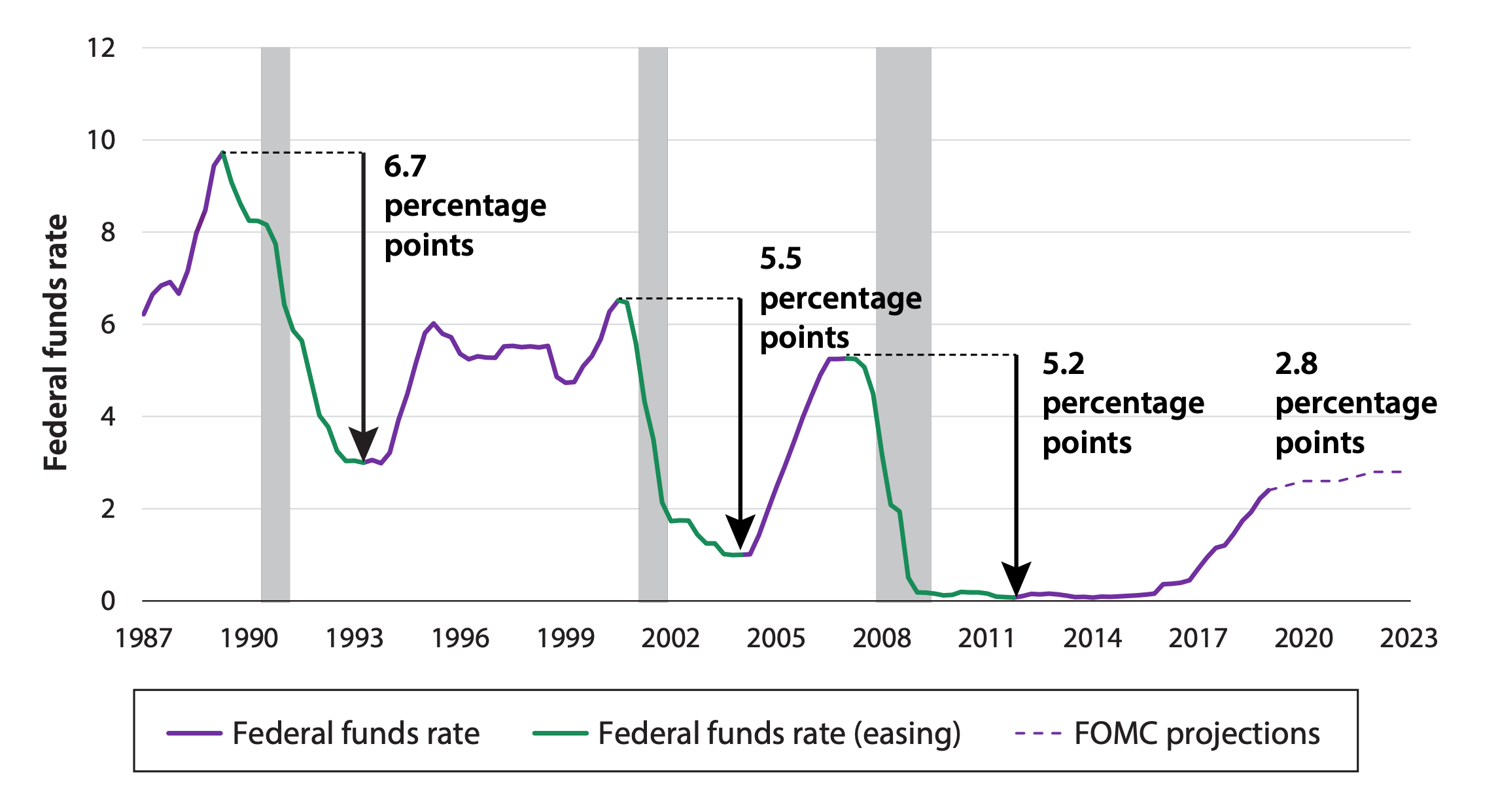 Source: Federal Open Market Committee (FOMC) projections 2019, Board of Governors of the Federal Reserve System 1987-2019, authors’ calculations.
Note: The arrows and corresponding values represent the differences in peak to trough for the federal funds rate. Shaded bars denote a recession. The dotted line represents the FOMC’s March 2019 projections for the federal funds rate.

If a recession were to occur in the United States today, the Federal Reserve would not be able to substantially lower interest rates—the traditional way central banks infuse cheap credit into the economy. This will leave a larger onus on the U.S. Congress to stimulate demand with spending increases and tax cuts.

The Romers find, consistent with their and others’ previous work, that countries carrying more sovereign debt as a fraction of total output—their debt-to-GDP ratio—tend to implement less expansionary fiscal policies during a crisis and thus have a tougher time getting out of their economic hole. (See Figure 2.) 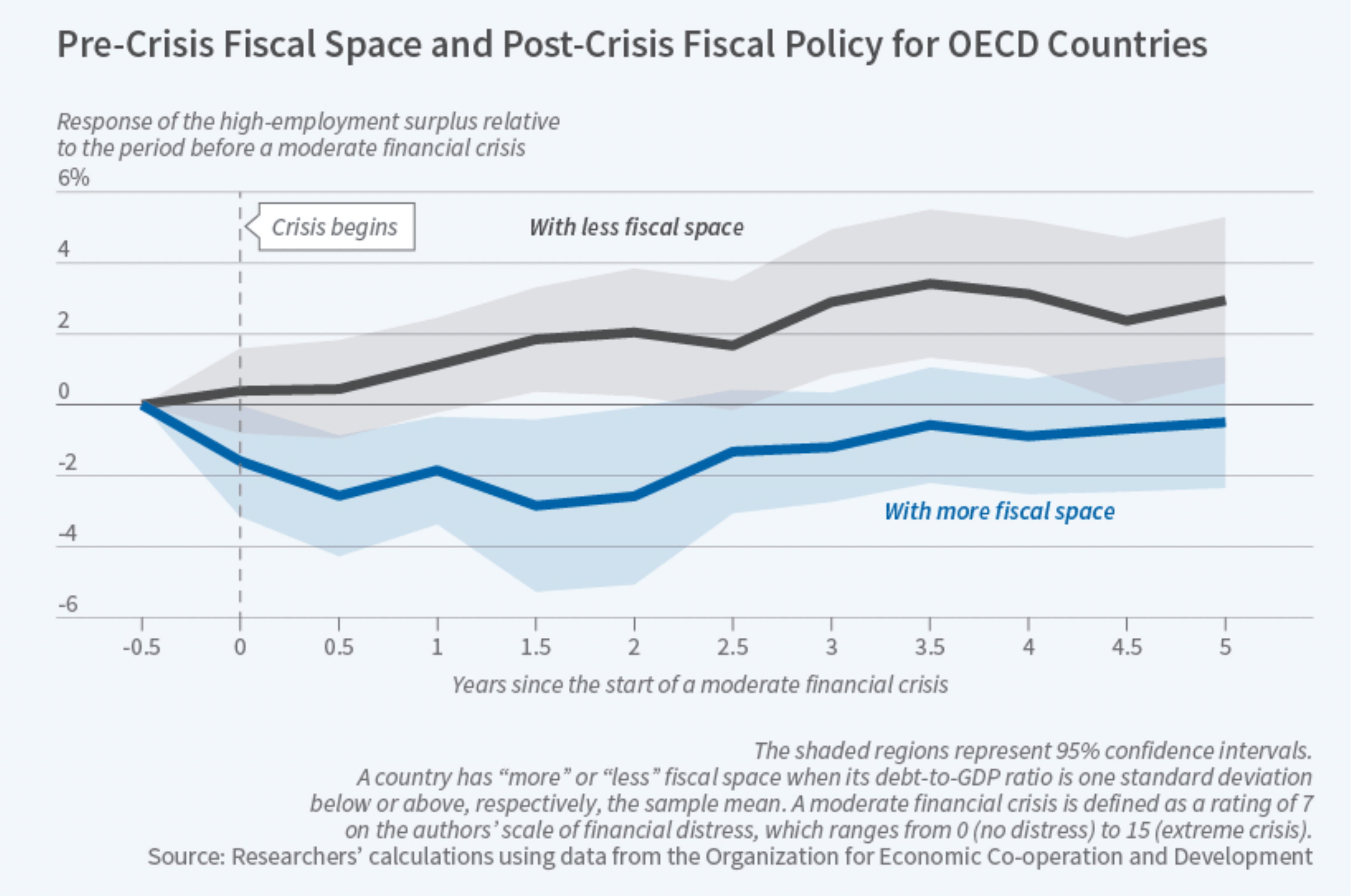 The Romers’ new paper goes beyond those previous studies to look at why this is so. The most obvious potential answer they provide is that higher debt could be reducing access to credit. Countries finance deficit spending by selling bonds, and if bond buyers grow concerned about a country’s ability to repay its debts, then they’ll demand higher risk premiums (in the form of higher interest payments) or will simply refuse to take the risk at all. This is clearly a serious constraint for some countries—think Greece in 2009.

But this is not what the Romers find overall. Even when controlling for interest rates on their debt and other indicators of bond market access, they find that countries with high debt-to-GDP ratios undertake less fiscal expansion after a crisis. So, the cost of credit or access to credit are not the cause.

The better explanation, according to the two authors, is what they call “policymaker choice.” It is policymakers’ views about the desirability of fiscal expansion or austerity that are directly related to debt-to-GDP ratios. Policymakers here include European Union and International Monetary Fund officials, who often exert influence on in-country policymakers through EU rules and IMF bailout conditions. So, for countries with low debt-to-GDP ratios, policymakers are more likely to view a rescue of the financial sector or countercyclical stimulus favorably, and for countries with high debt loads, policymakers are more likely to favor austerity, often because of either a perception that market access problems are imminent or more ideological motivations related to the appropriate size and role of government.

What lessons are there for the United States in these findings?

Given the pristine standing of U.S. government debt in global credit markets (assuming Congress raises the debt ceiling later this month), it’s unlikely that the United States will suffer from a lack of fiscal space during the next downturn. The country’s experience in 2008–2010 is instructive in this regard—even at the height of the Great Recession, when the federal government was running trillion-dollar annual deficits and the debt-to-GDP ratio jumped to 61 percent from 39 percent, demand for U.S. Treasury bonds remained strong (and thus financing that debt remained cheap).

But, as the Romers’ paper demonstrates, real fiscal space is different from perceived fiscal space, in the United States as well as other countries. After the 2010 U.S. elections, for example, Congress enacted a fiscal austerity agenda, prematurely replacing stimulus with spending cuts. This decision—probably the result of pure political calculation (newly empowered Republicans were not eager to improve President Obama’s standing with voters growing weary of the slow recovery), ideology (worry that stimulus spending would never be unwound and lead to a permanently larger government), and faulty economic thinking (an unfounded fear of debt-fueled inflation and a Greece-like fiscal crisis)—almost surely prolonged economic suffering. (See Figure 3.)

Impact of automatic and discretionary stimulus spending in the United States, 1980–2018 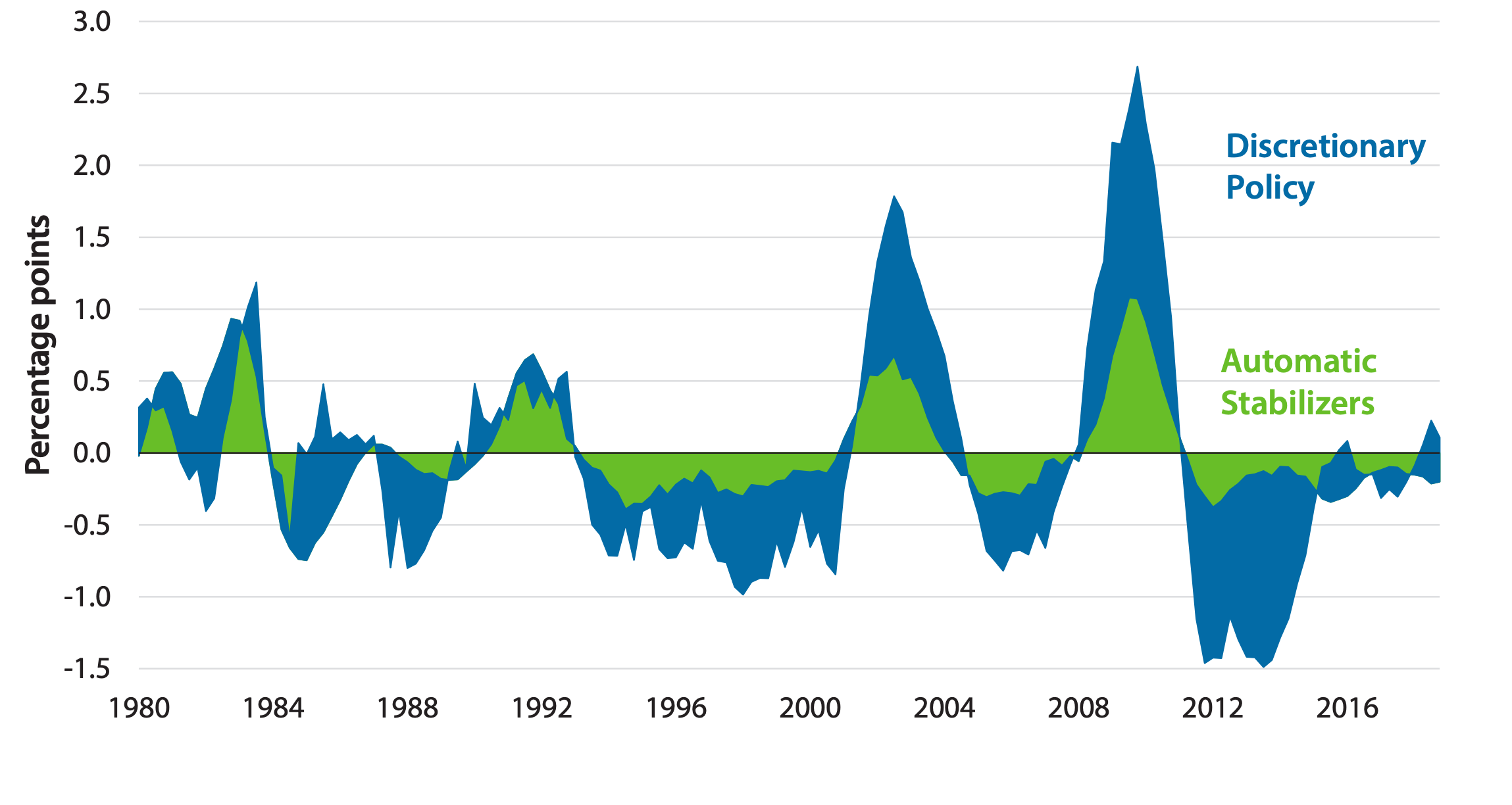 The authors offer two ways to combat the risk of policymakers making this error of limiting government stimulus spending amid a recession and early recovery. First, countries should maintain their debt ratios at manageable levels during periods of economic growth, so that they are not tempted to respond to future downturns with austerity measures. Second, policymakers—including those who write EU and IMF rules—should become more open to the idea of aggressive fiscal policy even in the face of high debt levels.

One promising approach that the authors do not consider is for federal policymakers to decide now what countercyclical fiscal policies should kick in when the U.S. economy stumbles. Dubbed “automatic stabilizers” by economists, these policies are attractive because they ensure a timely, temporary, and targeted response to the next recession, no matter who is in power or what direction the political winds are blowing.

The United States already has many automatic stabilizers—unemployment insurance is the canonical example—but there are lots of good ideas for improvements, many of which you can find in a book the Washington Center for Equitable Growth co-published with The Brookings Institution’s Hamilton Project in May. The book’s proposals are informed by recent academic evidence on:

Since those triggers also ensure stimulus is removed, or even reversed, when the economy is fully back on track, automatic stabilizers are also fiscally responsible—signaling to bond markets that any spike in federal deficits is temporary. And, on a practical level, it’s easier to carefully design policies now, when the economic sun is shining, than during an economic storm.

When the next U.S. recession hits, count on at least some policymakers claiming that the country’s budget is too out of balance and its debt-to-GDP ratio, which today stands at 78 percent, is too high to allow for fiscal stimulus. The ensuing political debate probably will be divorced from economic evidence and hamstrung by political finger-pointing. As Christina and David Romer demonstrate, federal policymakers will likely make suboptimal choices as a result. Is it possible that policymakers, foreseeing this prospect, might act now to head it off? Nobody should hold their breath, but when the next recession inevitably comes, policymakers—and the country as a whole—will be wishing they had. 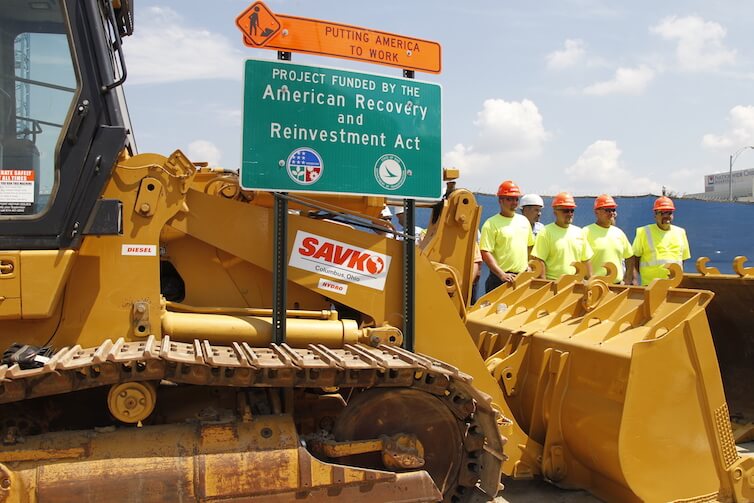