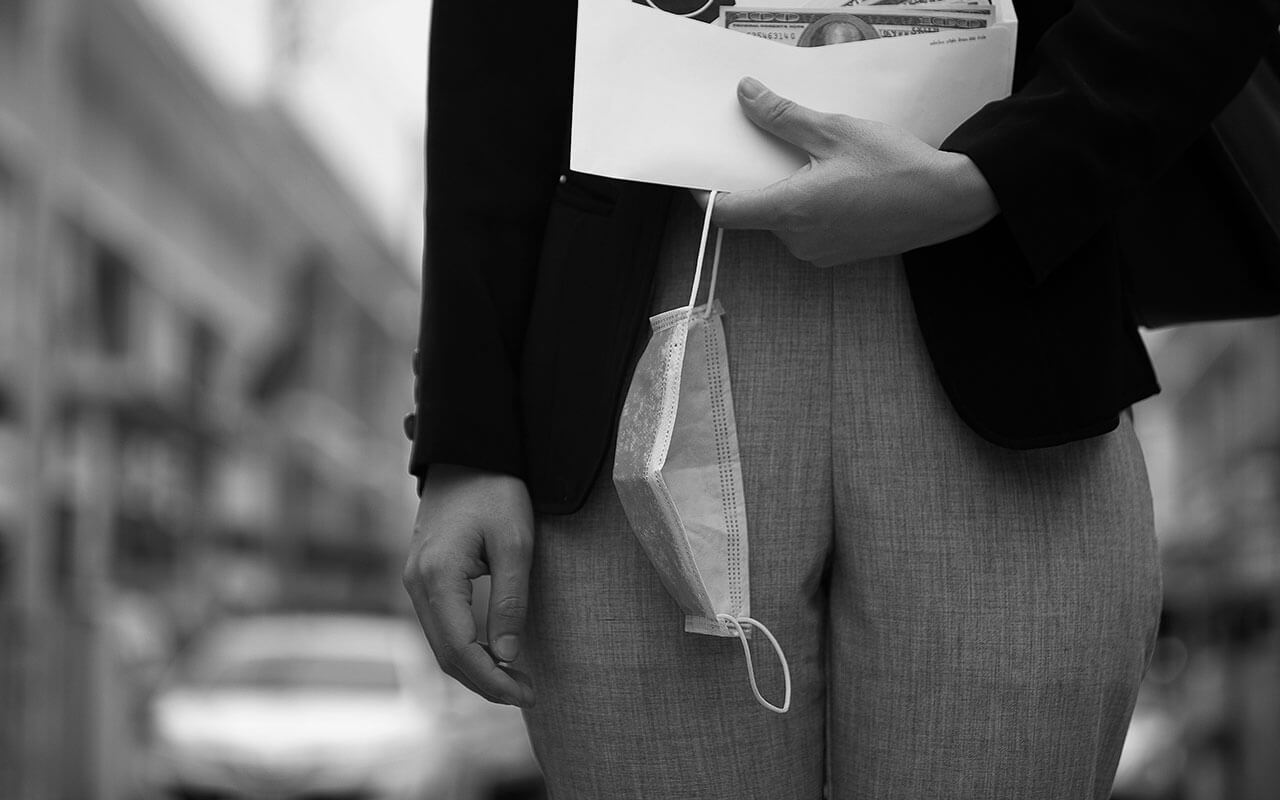 The coronavirus recession is shattering businesses and dramatically increasing unemployment, which hit 14.7 percent in April 2020, the highest level since 1948.1 So far, the federal government has delivered a one-time cash stimulus to most households and increased the amount of unemployment benefits for workers who have lost their jobs through no fault of their own through a program called Federal Pandemic Unemployment Compensation. But individuals and households affected by the coronavirus pandemic and ensuing recession will continue to need support even after it is safe for businesses to reopen. The federal government should therefore consider allowing people who have lost their jobs to keep their expanded unemployment benefits when they go back to work for as long as they could have collected these benefits by staying unemployed.

My proposed policy, the job losers’ stimulus program, is a cash stimulus for workers who have lost their jobs regardless of whether they remain unemployed or find new employment. Compared to only providing higher unemployment benefits to the unemployed, the job losers’ stimulus program boasts the twin benefits of providing greater support to workers who have been most affected by pandemic-related job losses while also modestly increasing overall employment. The exact size of the impact of this new stimulus program is difficult to predict, but a simple policy simulation shows that it could increase the amount of stimulus by 34 percent and allow an additional 6 percent of workers to exit unemployment and return to work within 4 months of losing their jobs.

The job losers’ stimulus program would strengthen the fiscal stimulus at a critical time for economic recovery and would create jobs and raise Gross Domestic Product by increasing consumer demand.2 This is especially important as consumer demand is low during the pandemic, which already led to price decreases as of April 2020.3 Such price decreases can lead to a deflationary spiral in which businesses are cash-strapped and must lay off workers, leading to even lower consumer demand and further price decreases down the road. Beyond these macroeconomic effects, the job losers’ stimulus program also directly benefits job losers and their families: The literature shows that an unconditional cash transfer has many positive effects, in particular on children’s education and health outcomes.4

The job losers’ stimulus program would also have positive effects on the U.S. labor market, allowing workers to return to work when the economy can safely reopen without losing precious income. Typically, Unemployment Insurance benefits do not replace all of a worker’s lost income, but the federal move to expand benefits by $600 per week during the pandemic as part of the Coronavirus Aid, Relief, and Economic Security, or CARES, Act means that some workers are receiving more in unemployment benefits than they earned while employed. Instead of taking away these important benefits from workers when the economic recovery is fragile, the job losers’ stimulus program would allow them to keep these benefits as they start working again and make more money overall than if they stayed unemployed.

An increase in federal government spending during a recession can increase GDP by more than the value of that spending—in some cases, almost doubling the amount of the original stimulus. This multiplier effect occurs when consumer demand is low. In April of this year, for example, the price of clothing decreased by 4.7 percent because there was not enough demand.5 When it is safe to reopen, a cash stimulus can increase consumers’ demand for clothing and create jobs in the clothing retail industry. These extra jobs then lead to more people having higher incomes and spending on more clothes, as well as other goods and services, multiplying the impact of the original cash stimulus.

The job losers’ stimulus program would build on this success by giving additional cash to formerly unemployed workers after they find a new job or otherwise return to work. In doing so, the job losers’ stimulus increases the size of the stimulus at a time when it can have the greatest impact, and the effect of each additional dollar can be calculated using the fiscal multiplier.

In a booming economy, when there are jobs to be had, increasing unemployment benefits can moderately increase the length of time workers remain unemployed. Overall, the literature shows that a 10 percent increase in benefits increases unemployment duration by 5 percent. This 0.5 elasticity is the average in the U.S. literature.8

Because the coronavirus recession is particularly deep, the elasticity could be even less than 0.3—potentially close to zero. Indeed, a careful quasi-experimental identification strategy finds no statistically significant effect of benefit extensions on aggregate unemployment during the Great Recession.14

When Unemployment Insurance does increase the duration of unemployment, it does so for two main reasons. The first (and most commonly discussed) reason is what economists call “moral hazard,” where workers are less likely to return to work because doing so will make them lose their unemployment benefits. The other reason, called the “liquidity effect,” is that unemployment benefits give unemployed workers enough money to live on so that they can afford to wait for a reasonable job, instead of being so desperate that they must take the first job opportunity they find to avoid severe financial hardship. Research by Harvard University economist Raj Chetty shows that the effect of Unemployment Insurance on employment is about 60 percent due to the liquidity effect.15

Because the job losers’ stimulus program would ensure that workers continue to receive unemployment benefits after returning to work, it only has a liquidity effect. In other words, it removes any potential disincentive to return to work, neutralizing the moral hazard concern, but continues to support job searchers who are looking for an appropriate match.

We can predict the likely impact of the job losers’ stimulus by calculating a simulation of the program if it were hypothetically implemented. To begin, we assume that the reference policy is to give a $600 weekly additional benefit to the insured unemployed only, and for up to 4 months starting at the beginning of the unemployment spell. The 4-month period was chosen because the Federal Pandemic Unemployment Compensation, or FPUC, program created by the CARES Act ends on July 31, 2020, which is 4 months after the act was passed.

To simulate the impact of the proposed job losers’ stimulus program, I examine the difference it makes relative to the reference policy I just described. The reference policy is different from the actual FPUC program because the reference policy is not limited in time; for my purposes, I will assume that a worker who loses his or her job in May can collect Federal Pandemic Unemployment Compensation for 4 months until September 2020 instead of having the benefit cut in July. In contrast, I assume that the job losers’ stimulus program allows all covered unemployed workers to receive $600 a week for 4 months, whether they remain unemployed or not.

Next, I examine how moving from the reference policy to the job losers’ stimulus program affects the amount of stimulus and unemployment. To figure out the extra amount of stimulus, I use the elasticity-adjusted survival function calculated in the prior step. (See the Table in the Appendix.) Taking the average over the first 4 months shows the share, out of the initial job losers, who are still unemployed and receive the job losers’ stimulus benefits over the first 4 months of the spell. One minus this average gives us the share of those who are no longer unemployed and receive benefits—this is the size of the extra stimulus because the benefits are expanded to those who are no longer unemployed.

Once the increase in stimulus is known, its effect on the economy can be calculated using the fiscal multiplier discussed above.

Empirically, not all workers exiting unemployment return to work. Some people will leave the labor force entirely. But as these exits usually occur later on in the unemployment spell, policymakers can reasonably assume that all those who exit unemployment in the first 4 months do so because they are returning to work.

Let’s look at the effect of the job losers’ stimulus through how it would affect a worker with the median annual wage of $40,000, according to Consumer Population Survey data for 2019. This median worker receives $393 in weekly unemployment benefits in a typical state such as Pennsylvania. Adding the $600 Federal Pandemic Unemployment Compensation benefit is an increase of 153 percent.

I then calculate the proportional increase in cash stimulus and the extra share of the initially unemployed who exit unemployment and return to work using the procedure outlined above. I consider three scenarios, summarized in Figure 1. The underlying full calculations are in Table 1 in the Appendix. Specifically:

Therefore, comparing column 2 and column 4 in Table 1 in the Appendix demonstrates that the higher the unemployment survival function is (meaning that unemployment duration is longer), the smaller the stimulus effect is because there are fewer people who are no longer unemployed and will also receive the benefits. For the same reason, a higher elasticity leads to a lower stimulus effect because a higher elasticity increases the unemployment survival rate, and so there are fewer re-employed people who can benefit.

Let’s take scenario 2 as an example to see how we can calculate the dollar amount for the stimulus effect and the number of job losers who return to work within 4 months based on our estimates. In scenario 2, the stimulus increases by 34.39 percent. The Congressional Budget Office currently projects that the extra $600 a week will cost $176 billion.19 If I take this number as the baseline, then the increase in stimulus is $61.42 billion.20 With a fiscal multiplier of 1.9, this would create an additional $55.28 billion in economic activity.21 At the same time, an additional 6.24 percent of the insured unemployed now find a job within 4 months.

Given that there were 18.9 million insured unemployed on April 18, and most of those entered unemployment in April, then an estimated 1.18 million job losers would return to work within 4 months due to the job losers’ stimulus.22

Overall, then, moving from the Federal Pandemic Unemployment Compensation to the job losers’ stimulus program would provide more income to workers who lost their jobs during the coronavirus recession. It would strengthen the much-needed stimulus to the economy while also allowing more unemployed workers to return to work when it is safe to do so.

—Ioana Marinescu is an assistant professor of economics at the University of Pennsylvania. 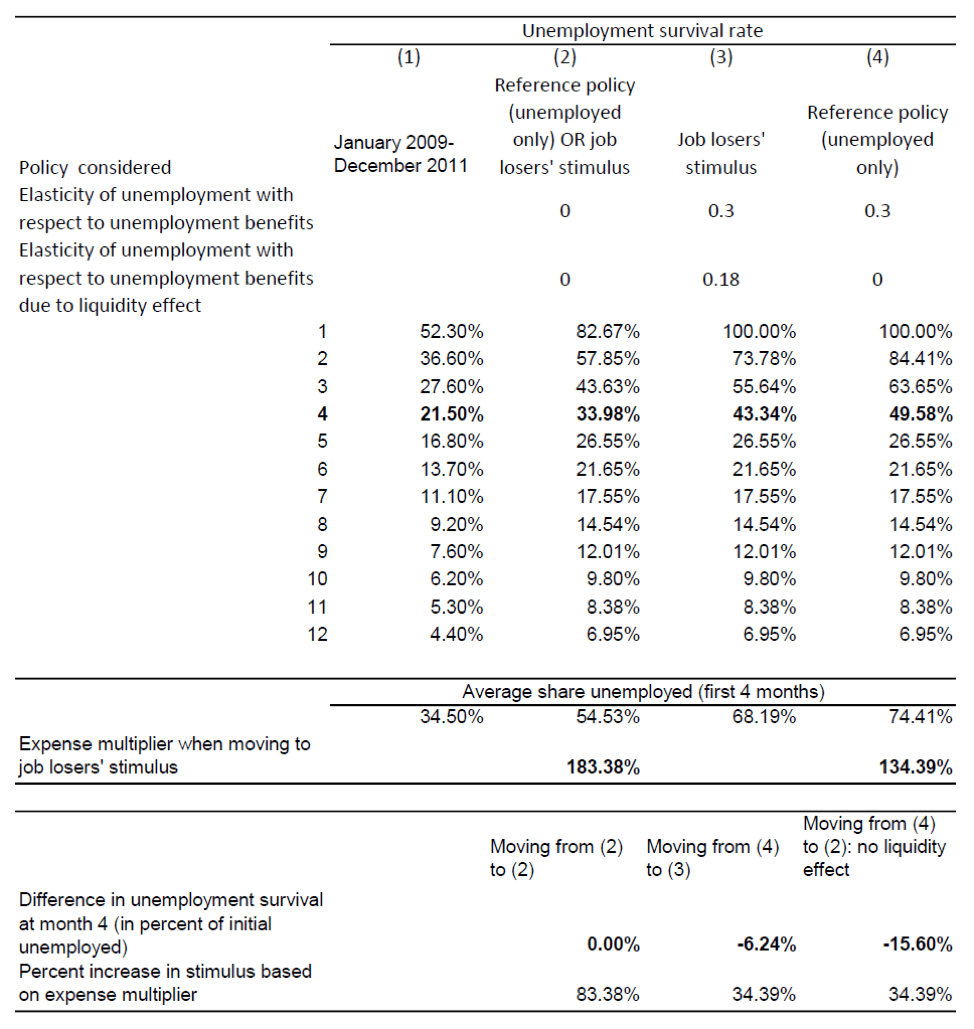 6. Chodorow-Reich, “Geographic Cross-Sectional Fiscal Spending Multipliers: What Have We Learned?”

7. Maggio and Kermani, “The Importance of Unemployment Insurance as an Automatic Stabilizer.”

11. Bruno Crépon and others, “Do Labor Market Policies Have Displacement Effects? Evidence from a Clustered Randomized Experiment,” The Quarterly Journal of Economics 128 (2) (2013): 531–80, available at https://www.nber.org/papers/w18597.

12. Marinescu, “The General Equilibrium Impacts of Unemployment Insurance: Evidence from a Large Online Job Board.”

21. Maggio and Kermani, “The Importance of Unemployment Insurance as an Automatic Stabilizer.”