1. Back in 1993 I remember pleading with my fellow technocrats in the Clinton administration that the principle of the former Aid to Families with Dependent Children program—that raising children was very valuable social work that society needed to find some way to remunerate—was a true and important one, and that whatever “ending welfare as we know it” meant, it should not mean abandoning that principle. But we did. Abandon it, that is. Now I very much hope that it is coming back. Read Liz Hipple, “The child allowance will pay dividends for the entire U.S. Economy far into the future,” in which we write: “One feature of the newly enacted American Rescue Plan that got less attention in the lead up to its passage than the more headline-grabbing $1,400 economic impact payments are the reforms to the Child Tax Credit. The legislation dramatically expands and improves the CTC, making it fully refundable and increasing its value to as much as $300 per child per month. The changes, particularly if they are made permanent, will be some of the most profound changes made to the social safety net in decades, with far-reaching positive effects not only for individual families but also overall economic mobility and growth.”

2. We have, for a long time, had relatively good theories about how wages are set that are much more true than the naive theory that wages are set in a competitive equilibrium process where workers are paid some unambiguous and innate “marginal product.” Efficiency-wage theories tell us that, in the context of the production network, workers are essentially paid their hold-up values—whatever it takes to incentivize them not to “shirk.” Employer-monopsony theories tell us that labor supply curves are almost always substantially elastic, it’s only because the local knowledge of how to manage the boss and which of your fellow workers’ company you would enjoy at lunch is a valuable source of utility and is something that you forgo if you change jobs. And yet elegant theoretical and empirical demonstration of the importance of these factors have had very little effect on how many neoclassical and neoliberal economist think about the labor market. Perhaps it is because sociologists and others tend to phrase these issues in terms of “power.” And, for economists, “power” is a meaningless noise—there are only factors that restrict the choice set, and exercise of choice within those constraints. Don Corleone in “The Godfather” does not exercise power. He merely makes you an offer—one that the constraint set, it is true, makes it one that you cannot refuse. Read Kate Bahn “In Conversation with Jake Rosenfeld,” in which they discuss “the causes of economic inequality in the United States and other postindustrial economies, particularly the determinants of wages and salaries and how these vary across time and place. [Rosenfeld’s] most recent book, You’re Paid What You’re Worth and Other Myths of the Modern Economy (Harvard University Press, 2021), challenges the idea that workers are paid according to individual performance or inherent features of their jobs, and places power and social conflict at the heart of economic analysis … new research surveys show us that much of what we think determines our pay is wrong.”

1. Actually, Tyler Cohen, no, I do not believe that any “person operating in good faith can look at the evidence and take either side of the argument” on whether a $15-an-hour minimum wage is likely to reduce employment by more than 1 million. I believe that anyone operating in good faith—who is willing to assess recent statistical studies without strongly motivated reasoning—has to wind up much, much closer to Arindrajit arguments. Read his “No, a $15 minimum wage won’t cost 1.4 million jobs,” in which he writes: “CBO’s report examines only 11 studies … Its sources include the first University of Washington study but not the follow-up that came to a more positive conclusion … changed its formula for summarizing the literature since … 2019 … Then, it looked at the median … This time, it placed more weight on those that found large job losses. The 2019 report was already somewhat out of step with the latest academic research, but the new one is even more so.”

2. If you have not yet read Arindrajit Dube on the minimum wage, you should do so immediately. Read his “Impacts of minimum wages: Review of the international evidence,” in which he writes: “Overall the most up-to-date body of research from US, UK and other developed countries points to a very muted effect of minimum wages on employment, while significantly increasing the earnings of low-paid workers. Importantly, this was found to be the case even for the most recent ambitious policies. Therefore, it concludes that, based on the overall weight of the available evidence, there is room for exploring a more ambitious NLW remit in the UK in the coming years, in the range of 60 percent to two-thirds of median hourly earnings. However, given that the evidence base is still developing, it would also be prudent to accompany more ambitious minimum wages with a clear mandate that the Low Pay Commission can use to implement, evaluate and recalibrate any proposed changes to the NLW, thereby designing in responsiveness to any unforeseen impacts if required.” 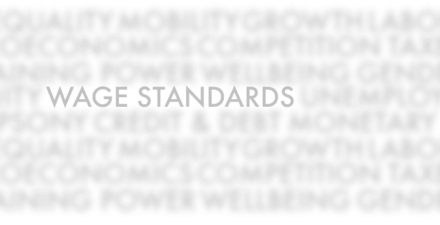