Today was the second day of the three-day annual meeting of the Allied Social Science Associations, which is organized by the American Economic Association. The conference, held in San Diego this year, features hundreds of sessions covering a wide variety of economics and other social science research. Below are some of the papers and presentations that caught the attention of Equitable Growth staff during the second day. Included below are the abstracts from those papers as well as links to the sessions at which they were presented. Check out the highlights from yesterday as well, and come back after tomorrow’s program for more highlights. 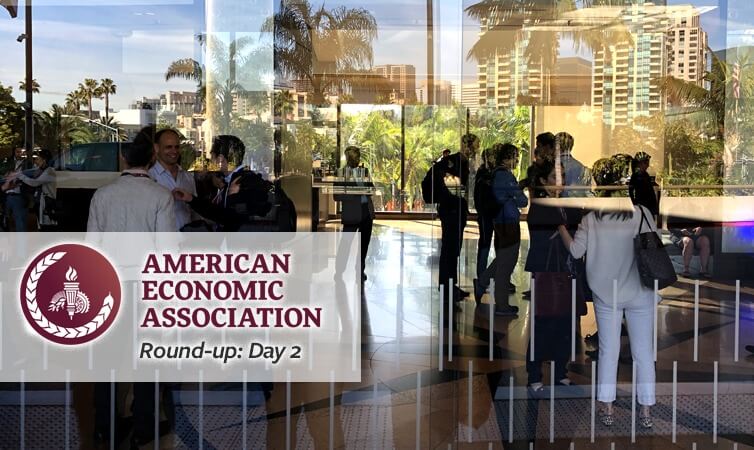 Abstract: Why does “algorithmic bias” occur? The two most frequently cited reasons are “biased programmers” and “biased training data.” We quantify the effects of these using a field experiment on a diverse group of AI practitioners. In our experiment, machine learning programmers are asked to predict math literacy scores for a representative sample of OECD residents. One group is given perfectly representative training data, and the other is given a “dataset of convenience” — a biased training sample containing who confirm to common expectations about who is good at math. Using this field experiment, we quantify the benefits of employing programmers who are diversity-aware vs obtaining more representative training data. We also measure the effectiveness of training interventions to reduce algorithmic bias, including both reminders and technical guidance.

Abstract: Firms have become increasingly different in terms of size (concentration), wages and productivity. Alongside these trends there appears to be an increase in aggregate price-cost markups. Using firm-level panel data from the US and EU, we investigate four hypotheses to explain these trends: (i) an increase in platform competition; (ii) a rise in fixed costs; (iii) a decline in antitrust enforcement and (iv) an increase in competition.

Abstract: This paper provides a simple conceptual framework that captures how different perceptions, attitudes, and biases about immigrants or minorities can shape preferences for redistribution and reviews the empirical evidence on the effects of increasing racial diversity and immigration on support for redistribution.

“Earnings Inequality for Asians and Hispanics: An Examination of Variation across Subgroups”

Abstract: Our analysis uses a novel data set that combines data from the confidential-use US Census American Community Survey linked to administrative records from the IRS. In this new panel, we follow the earnings (as indicated by individual level W-2 and 1099 forms) at the individual-level over time for the Asian and Hispanic population in the U.S. for 11 years (2005-2015). Importantly, we disaggregate these two race and ethnic categories into smaller subgroups to examine how aggregation obscures different average outcomes across these groups. Our analysis focuses on several measures of inequality and immobility. This paper is a follow-up to our prior analysis which examined income inequality across the following race and ethnic groups: Non-Hispanic white, Black, American Indian/Alaska Native, Asian American, Native Hawaiian/Pacific Islander, Hispanic and Other Races (Akee et al, 2017). In this analysis, we disaggregate Asian into the following groups: Asian Indian, Chinese, Filipino, Japanese, Korean and Vietnamese. For Hispanics, we disaggregate into the following groups: Mexican, Puerto Rican, Cuban, Central American, Latin American. We use the self-identified race and ethnic categories as provided in the American Community Survey for each individual. We are also able to identify new immigrants (post 2005 arrival) and show how including this group affects measures of earnings inequality and immobility.

“Economic Foundations of Real Freedom for All”

Abstract: A common one-dimensional paradigm models the conflict over where to position policies along a continuum between the poles of government and market. Drawing on ideas from mechanism design as well as political philosophy, we explore the normative, modeling and policy challenges arising if we locate policies and institutions in a two-dimensional space by adding a third pole: community, based in important respects on social norms rather than state imposed laws or contractual exchanges.

“Economics Is Not a Man’s Field: A History of CSWEP and of the First Gender Reckoning in the Economics Profession”

Abstract: Our paper is a history of this first gender reckoning in US economics, one beginning in the early 1970s. Based on hitherto closed AEA archives, comprehensive oral interviews with major protagonists, and quantitative data from the first decade of the CSWEP’s Roster, we reconstruct the historical context that led to the establishment of the CSWEP in order to unpack its successes and failures, the enthusiasm it generated, and the resistance it encountered. We show that then (as now), the birth of CSWEP was tied to larger social movements: the feminist and civil rights movements, growing public awareness of issues surrounding discrimination, and the shifting legal context that drew many scientific societies toward such a reckoning. But we also emphasize how economists’ peculiar approach to social phenomena shaped their views of their own gender issues. For economists both study and experience discrimination, which led them to approach gender issues within the profession as an economic phenomenon. The status of women in economics was thus tied to ongoing debates within labor economics. The theories, models, and empirical evidence that labor economists – from Becker and Arrow, Bell and Bergmann, Ashenfelter and Blinder, Ferber and Blau, among many others – developed and produced to understand the role of women in the economy also shaped economists’ understanding of gender issues within their profession. CSWEP pursued actions common to most scientific societies, such as mentorship programs and the development of a roster, but also very specific changes to the profession, such as the establishment of Job Openings for Economists (rationalized in economic terms), and the sponsorship of conferences on women’s labor supply, discrimination, and occupational segregation.

“GDP-B: Accounting for the Value of New and Free Goods in the Digital Economy”

Abstract: The welfare contributions of the digital economy, characterized by the proliferation of new and free goods, are not well-measured in our current national accounts. We derive explicit terms for the welfare contributions of these goods and introduce a new metric, GDP-B which quantifies their benefits, rather than costs. We apply this framework to several empirical examples including Facebook and smartphone cameras and estimate their valuations through incentive compatible choice experiments. For example, including the welfare gains from Facebook would have added between 0.05 and 0.11 percentage points to GDP-B growth per year in the U.S.

Abstract: This paper looks at the role of gender job segregation and inequality through the effect of gender job segregation on labor’s share of national income. An earlier paper found this relationship was true in both advanced and emerging market nations. Further, among advanced economies, it was found that weakening protections for dismissal increased women’s job segregation, which then lowered labor’s share of income. This paper focuses on advanced economies and digs deeper on regulations that protect dismissal to include the role of unions in protecting workers. So, this includes an analysis of type of collective bargaining – centralized, decentralized, sectoral – and union density to also examine those effects.

Abstract: We study the evolution of super star firms in the Global economy over the past 30 years. We estimate their contribution to global productivity growth using Hulten’s formula and using a measure of global reallocation of economic activity.

“How to Get Away with Merger: Stealth Consolidation and its Real Effects on U.S. Healthcare”

Abstract: Most U.S. mergers are not reported to the federal government on the basis of their size. This can effectively exempt them from antitrust scrutiny, resulting in mergers to monopoly and duopoly, even in industries where enforcement is otherwise robust. This paper studies the impact of premerger notification exemptions in the context of US dialysis providers. First, I find large effects on enforcement. For instance, many proposed dialysis facility acquisitions that would otherwise be blocked over 95% of the time are blocked less than 5% of the time when exempt from premerger notification requirements. Second, I find equally important effects on market structure. Exempt facility acquisitions account for most of the rise in industry-wide within-market concentration over the last two decades. In fact, applying the enforcement rates faced by reportable mergers to exempt mergers stalls the dramatic consolidation of the dialysis industry. Finally, facility acquisitions associated with exempt mergers compromise the quality of care received by patients.

“How to Increase Racial/Ethnic Diversity in Economics”

Abstract: The goal of the article is twofold: 1) To give readers a sense of the minority experience in the economics profession and 2) To give readers action steps that they can take to improve racial/ethnic diversity in the economics profession. The black percentage of Economics PhD recipients has hovered around 4 percent since the 1980s, while the fraction of blacks receiving PhDs and, particularly, PhDs in math or science has grown over this time period. Blacks make up about 12 percent of the US population. Similarly, Hispanics have seen increases in Economics PhDs as other STEM PhDs and PhDs in general. However, the Hispanic fraction of degrees remains below the Hispanic fraction of the population. We will describe the experience of being a minority in economics with the goal of identifying difficulties for which we will provide approaches to remedy. We finally offer advice to profession-shareholders including: Help to correct misconceptions about economics starting even before minority students arrive on campus. When hiring (beyond the rookie market) start with a census of those in field. Mentor a minority student.

“The Impact of Agency on Time and Risk Preferences”

Abstract: Scholars have long argued for the central role of agency in the human experience. In this paper, we demonstrate the importance of agency in shaping people’s patience and risk tolerance. We focus on the context of resource scarcity, which has been associated with both impatience and a lack of agency. Using data from a representative sample of over 86,000 individuals worldwide and two experiments, we replicate the decrease in patience among those exposed to scarcity. However, we show that endowing individuals with agency over scarcity fully moderates this effect, increasing patience substantially. We further show that agency’s impact on patience is partly driven by greater risk tolerance. These results hold even though individuals with greater agency do not exercise it; simply knowing one could alleviate one’s scarcity is sufficient to change behavior. Finally, we demonstrate that these effects of agency generalize beyond scarcity, highlighting the potential for agency-based policy and institutional design.

Abstract: We study the effect of family income and maternal hours worked on child development. Our instrumental variable analysis suggests different results for cognitive and behavioral development. An additional $1,000 in family income improves cognitive development by 4.4 percent of a standard deviation but has no effect on behavioral development. A yearly increase of 100 work hours negatively affects both outcomes by approximately 6 percent of a standard deviation. The quality of parental investment matters and the substitution effect (less parental time) dominates the income effect (higher earnings) when the after-tax hourly wage is below $13.50. Results call for consideration of child care and minimum wage policies that foster both maternal employment and child development.

Abstract: Public firms in the United States that provide better insurance against productivity shocks to their workers experience higher cash flow volatility. The difference in intra-firm risk sharing between workers and capital owners accounts for more than 50% of the variation in firm-level cash flow volatility. I develop a theory in which wages can serve either as a hedge or as leverage, depending on the history of the productivity shocks the firm has faced. Heterogeneous roles of workers in the firm are derived by analyzing the dynamic equilibrium wage contracts between risk-neutral owners and risk-averse workers who can leave the firm with a fraction of accumulated human capital. Owners of the firm will optimally bear more risk when the current value of the firm’s human capital is lower than the peak value it has reached. The model explains the joint dynamics of cash flow volatility and the wage-output sensitivity. Also, the model produces predictions for the dynamics of cash flow volatility that are consistent with the time series properties of the firm-level data. 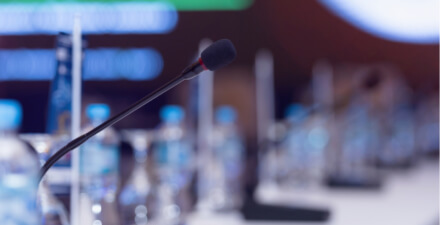 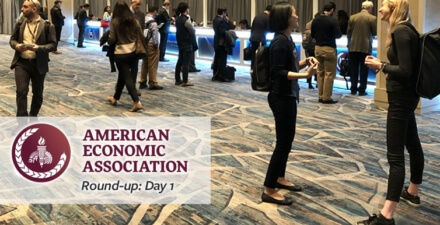 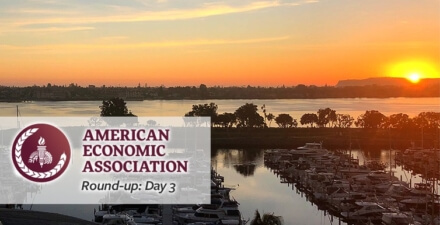