Criminal antitrust filings and civil nonmerger actions have fallen in the United States, while U.S. GDP growth has outpaced growth in antitrust appropriations, writes Michael Kades in a new report on the state of U.S. antitrust enforcement. Kades looks at the number and type of cases brought by enforcers at the Federal Trade Commission and the U.S. Department of Justice’s Antitrust Division, the resources Congress provides for antitrust enforcement, and the merger filing-fee system that has become the primary source of funding for federal antitrust enforcement.

Just as the Federal Reserve cut interest rates for the second time this year, Somin Park warns that super-low interest rates may actually harm economic growth by reducing competition and investment. In a post detailing the findings of a new working paper, Park writes that a drop in interest rates can have one of two effects: one in which firms ramp up investment to raise productivity and expand market power to gain higher future profits (good for the economy), and one in which the productivity gap between a leading firm and its industry competitors grows so wide that investment from both sides dries up (not good for the economy). The authors of the working paper posit that whether the first or the second effect takes place may depend on how low interest rates are to begin with, before they are lowered even further.

Equitable Growth President and CEO Heather Boushey testified before the House Budget Committee this week on “solutions to rising economic inequality.” Her testimony covered long-term challenges facing the U.S. economy, such as increasing inequality and decreasing mobility, how such trends hurt economic growth and productivity, and concluded with policy solutions to tackle these systemic problems.

Heather Boushey details in Politico Magazine why it’s important for federal policymakers to understand how the fruits of economic growth are distributed up and down the income ladder in the United States. In her piece for Politico’s “How to Fix Politics” feature in Inequality, Boushey calls for Congress to fund the work by the U.S. Bureau of Economic Analysis to disaggregate economic growth so that policymakers can “conceptualize and analyze economic progress” as a “vital step toward better, fairer growth.”

The Federal Trade Commission announced an investigation into Amazon.com Inc’s Marketplace, interviewing sellers to determine whether the company is dampening competition from smaller merchants, report Spencer Soper and Ben Brody for Bloomberg. The interviews, lasting about 90 minutes each and conducted by a team of attorneys and an economist, suggest “a serious inquiry rather than investigators merely responding to complaints and going through the motions,” say Soper and Brody. The probe is part of a larger effort by the antitrust agencies—the FTC and the Justice Department’s Antitrust Division—looking into how big tech companies such as Amazon, Facebook.com Inc, and Alphabet Inc.’s Google unit control the U.S. economy.

What is the future of work? The AFL-CIO believes it includes a four-day, 32-hour workweek, thanks to changes in technology and innovation that have increased the productivity of the labor force, writes Alexia Fernández Campbell for Vox. Researchers at the largest federation of labor unions in the nation say that shortening the workweek has two major benefits: It redistributes work hours to the millions of underemployed workers in the labor force, and it can actually make workers more productive and reduce the likelihood of burn-out. Other research supports these claims as well. So, will we see three-day weekends in the future? It may not be as far-fetched as it seems, considering that until labor law reforms in 1940, Americans worked up to 100 hours per week over six days.

Speaking of the future of work, it appears that the gig economy may not be “it” anymore, writes Neil Irwin for The New York Times. While app-based employment seemed to be everywhere in the not-too-distant past, California’s new law requiring gig economy employees to be treated as conventional workers—signed by Gov. Gavin Newsom (D) this week—shows just how limited the gig economy may be. Plus, a growing economy has opened up more traditional opportunities for workers, meaning app-based work may become even more niche. In fact, most people these days use gig economy jobs to supplement their more traditionally earned income. “As the gig economy matures,” Irwin concludes, “it is becoming clear that every trend has its limits.”

The debate is heating up over Sen. Elizabeth Warren’s (D-MA) proposed wealth tax, writes John Cassidy for The New Yorker, as it is the first one released by a viable presidential candidate in decades. Cassidy covers the possible advantages as well as the controversies surrounding the proposal, which would levy a 2 percent tax on wealth greater than $50 million and tax 3 cents on every dollar of wealth exceeding $1 billion—potentially bringing in $2.75 trillion over 10 years, according to Sen. Warren’s campaign. 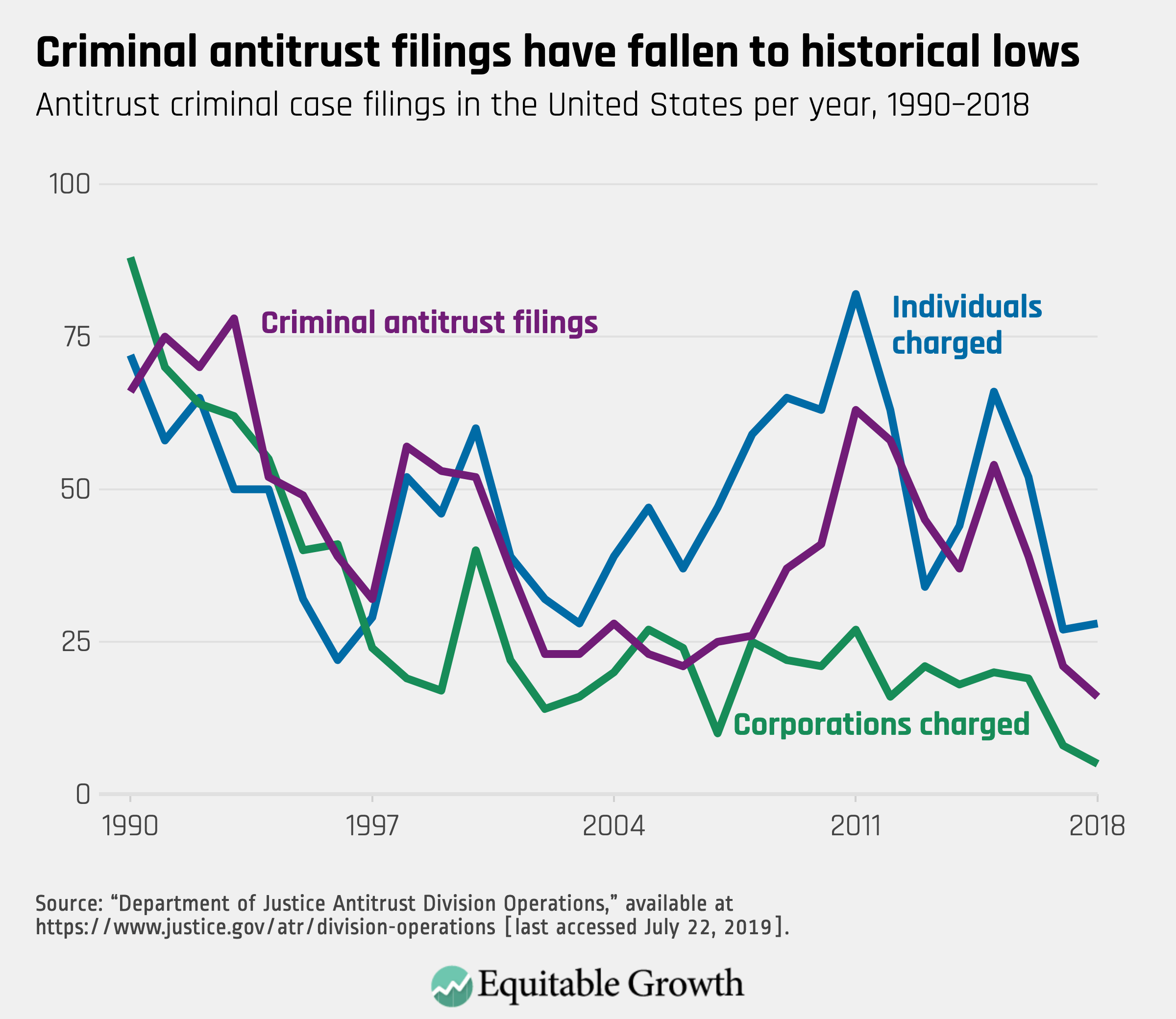 Figure is from Equitable Growth’s “The state of U.S. federal antitrust enforcement,” by Michael Kades.