Weekend reading: “The economy should work for all Americans” edition

This week, Equitable Growth added a new working paper from Equitable Growth grantee and University of Leuven economist Mariana Zerpa to our working paper series. Using a new dataset including a variety of universal and targeted early childhood education programs at the state level, Zerpa analyzes the durability over time of the academic and behavioral improvements caused by these programs. As I summarized in a blog post, Zerpa finds substantial reductions in grade repetition and in the occurrence of developmental and behavioral problems that persist for at least 8 years after children participate in early childhood programs.

Raksha Kopparam summarized some of the key data points in the “U.S. Financial Health Pulse: 2018 Baseline Survey” from the Center for Financial Services Innovation. In addition to pointing out that large numbers of U.S. households are financially “coping” or “vulnerable,” Kopparam documents persistent disparities across racial and ethnic lines. These findings provide further support for the need for disaggregated economic data to get a better sense of the economic well-being of the economy as a whole.

Senior Policy Advisor Liz Hipple highlighted a recent paper from the Federal Reserve Board on the economic circumstances of millennial Americans. Notably, the paper finds that earnings were 27 percent higher for Generation Xers and baby boomers compared to millennials of the same age. The authors argue, however, that the challenges facing millennials likely reflect the exacerbating labor and credit market conditions in the aftermath of the Great Recession. Hipple concludes by citing Equitable Growth grantee and University of California, Berkeley economist Jesse Rothstein’s work on the centrality of labor markets to intergenerational mobility.

Yesterday, Brad Delong shared his thoughts on recent research and writing in economics with a focus on macroeconomic analysis. In addition to highlighting the significant potential role of peer effects and externalities in Zerpa’s working paper, Brad quotes from our Executive Director and Chief Economist Heather Boushey’s column for The Hill on the disastrous employment and growth effects of the failed tax-cut experiment in Kansas.

Equitable Growth steering committee member and Princeton University economist Alan Blinder discusses how the United States has become the most unequal rich country in the world despite once being a land of opportunity characterized by social mobility and the American dream. Blinder cites research by former Equitable Growth steering committee member and Harvard University economist Raj Chetty, which documents how rising economic inequality has been accompanied by declining social mobility. Blinder concludes by arguing that strengthened unions, pensions, entitlements, and estate taxes must be core features of any plan to return the United States to the levels of mobility and opportunity experienced by many workers in the 1950s. [wsj]

In addition to deregulation, lower taxes for the wealthy, and declining unions, New York Times columnist David Leonhardt points out that changes in corporate structure have been an important cause of rising inequality and persistent wage stagnation for most Americans. Indeed, since the 1970s, corporations began focusing less on serving the public as a whole and more on delivering value exclusively for their shareholders. The route to restoring the American dream and creating a fairer economy must therefore include increasing the power of workers, consumers, and communities in corporate decision making. [nyt]

Benjamin Wallace-Wells at The New Yorker discusses the implications for the racial wealth gap of the recent “baby bond” proposal from U.S. Senator Cory Booker. The proposed policy would entail creating trust accounts worth $1,000 for every child born in the United States to grow over time and provide them with a solid financial foundation to transition to adulthood and progress in their careers. Discussing work by Equitable Growth grantees and economists William Darity, Jr., and Darrick Hamilton, Wallace-Wells notes that one key effect of such a policy would be to reduce the massive average wealth disparity between black and white families—$17,000 vs. $170,000 per household. [new yorker]

Pat Ferrier at the Coloradoan takes a deep dive into the market for childcare in Fort Collins, Colorado. Ferrier argues that both low availability and high costs are substantial burdens for middle class families—and even larger obstacles for poor families working to join the middle class. Through statistics and anecdotes, Ferrier illustrates how childcare provision is characterized by a market failure in which those who need it most are the least financially able to pay for it. This structural flaw in the childcare market underlies the indispensable role of public policy in securing childcare access for all children in the United States. [coloradoan] 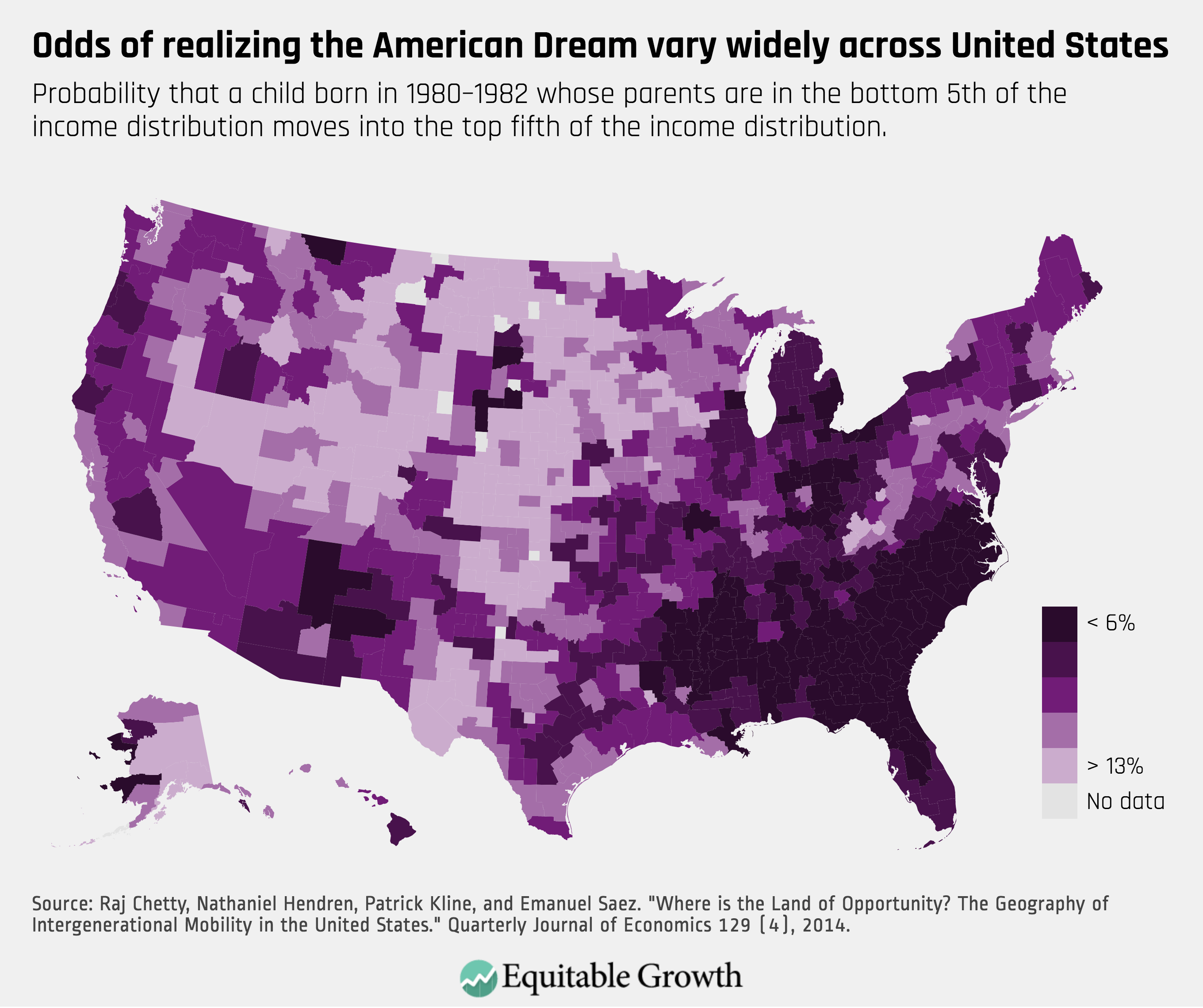