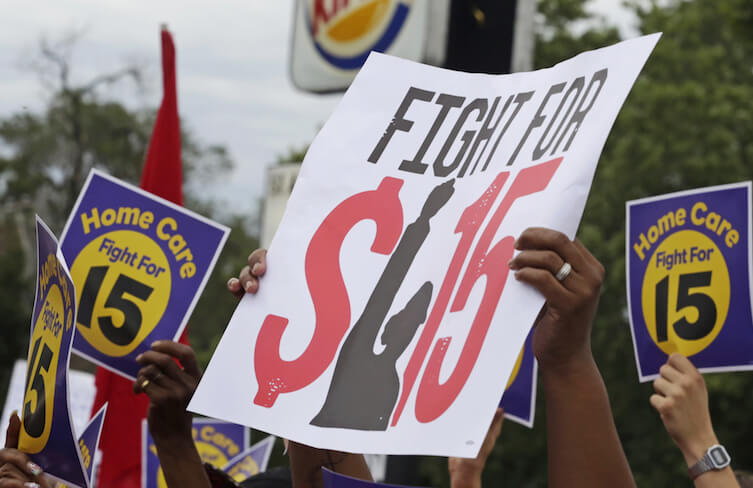 New research shows recent minimum wage increases in six cities raised workers’ wages without producing job losses. A group of Equitable Growth grantees and economists at the Center for Wage and Employment Dynamics of the Institute for Research on Labor and Employment at the University of California, Berkeley conducted the first comprehensive empirical study on the earnings and employment effects of gradual minimum wage increases toward $15 an hour enacted recently by Chicago, the District of Columbia, Oakland, San Francisco, San Jose, and Seattle. The authors—Sylvia Allegretto, Anna Godoey, Carl Nadler, and Michael Reich—find substantial earnings growth and inconsistent employment effects in the food services industry as a result of the minimum wage increases

Given stagnation in the federal minimum wage in recent decades, states and localities are leading the way, increasing their statutory minimum wages over the past 5 years in response to grassroots pressure. The effects of minimum wage changes have long been a focus of study for economists, but most research on this topic has been conducted at the state and national level. Breaking with this trend, Allegretto and her co-authors narrow their focus to local labor markets and to a sector likely to be particularly affected by the local legislative changes, the food services and drinking places industry—as defined by the U.S. Bureau of Labor Statistics—given the industry’s widespread reliance on low-wage labor. Since the increase to $15 per hour is being implemented gradually, the study includes the effects of the minimum wage levels attained by the end of 2016. At that point, all six cities had minimum wages in excess of $10, and the levels in two of the cities—Seattle and San Francisco—had reached $13.

The event study and synthetic control methods employed by the authors permit them to isolate the effects of these minimum wage increases on employment and earnings by comparing them to employment and wage trends in analogous highly populated counties in other parts of the United States. This comparison allows the authors to distinguish the effect of higher minimum wages from other potential explanations for the results such as higher private-sector growth in the cities that enacted a minimum wage increase.

Additionally, the authors perform a series of robustness tests to further confirm that their findings are not the result of other changes underway in the six cities they study. They find, for example, negligible employment and earnings effects for high-wage professional workers, who should not see direct benefits from the minimum wage reforms.

Pooling the data for the six cities while also producing estimates for each city’s data, Allegretto, Godoey, Nadler, and Reich find robust, statistically significant, and positive effects of minimum wage increases on average earnings in the food services industry. Specifically, they estimate that a 10 percent increase in the minimum wage produces an increase of 1.3 percent to 2.5 percent in earnings on average. The results for employment levels are less clear, with the authors estimating anywhere from 0.3 percent decrease to a 1.1 percent increase in employment as a result of the rise in the minimum wage.

Consistent with the authors’ analysis, previous research by Equitable Growth points to several potential explanations for these empirical results. Equitable Growth economist Kate Bahn details one cause of the observed employment effects from the minimum wage increase may be the prevalence of monopsony in contemporary labor markets. Since monopsony gives firms the power to set wages below their efficient level, employers can likely afford minimum wage increases to a much larger extent than is often assumed. As Equitable Growth grantee and Columbia University economist Suresh Naidu points out in a recent column for Vox, co-authored with University of Chicago law professor Eric Posner and Microsoft Corp. economist Glen Weyl, the soaring corporate profits and rising inequality characterizing the current U.S. economy are likewise central features of monopsony, as they are facilitated by artificially low wages.

In addition to monopsony’s role in limiting workers’ labor market opportunities, Allegretto and her co-authors identify several channels through which minimum wage increases may have positive effects on employment, partially or totally offsetting the channels through which these reforms may produce job losses. On one hand, minimum wage increases for low-wage workers can increase consumer demand for products and services—in turn driving up demand for workers to produce and provide them and compensating for any price increases induced by heightened labor costs. On the other hand, wage increases can attract inactive working-age adults into the labor market, encourage workers already in the labor force to increase their hours, and bolster workers’ labor market attachment and experience by reducing turnover.

The data analyzed by Allegretto, Godoey, Nadler, and Reich do not permit a clean disaggregation of these different channels, but their report breaks important ground in calculating positive earnings and unclear employment effects as a result of minimum wage increases beyond $10 an hour. Although their finding of varying employment effects provides suggestive evidence that minimum wage increases do not necessarily entail efficiency losses, Equitable Growth grantee and New School economist David Howell argues that “no job losses” should not be the standard for evaluating minimum wage increases as such reforms can be implemented in conjunction with other employment programs and work incentives.

Indeed, as Equitable Growth explained in a previous issue brief summarizing empirical studies in this research stream, raising the minimum wage must be a central component of any comprehensive plan to strengthen wages, employment, and growth across the United States.

The elusive employment effect of the minimum wage

Did the minimum wage or the Great Recession reduce low-wage employment? Comments on Clemens and Wither (2016)