A snapshot of the long-term impacts of universal prekindergarten

A Benefit-Cost Analysis of Universal Pre-K through 2050

If the United States were to invest in a public, voluntary, high-quality universal prekindergarten program that starts in 2016 and is fully phased in by 2017, what would its effects be in the long-run? Toggle between the buttons to visualize the different impact of a universal prekindergarten program across the U.S. or click on a state to learn more about that program in that state.

Currently, across the United States, only 17 percent of 3- and 4-year-olds (1,336,695 children) participate in public state-sponsored prekindergarten, and another 38 percent attend Head Start or private preschool. Unfortunately, the quality of these programs varies significantly across and even within states, which means that preschoolers do not always experience the same benefits or long-term effects. If a universal program were enacted and fully phased in by 2017, 86 percent of 3- and 4-year-olds (6,960,916 children) would be enrolled in public prekindergarten, benefiting from a high-quality early childhood education.

What are the benefits?

High-quality prekindergarten education can generate significant long-run benefits for participating children, their families, and even other non-participants. Longitudinal studies have shown, for example, that aside from improved educational achievement, children who have attended a prekindergarten program have spent less time in special education and had lower grade retention rates. These children also experience less maltreatment and reduced crime, smoking, and depression rates over the course of their lives. In addition, both participating children and their parents have higher projected earnings, which subsequently increases government tax revenue.

If a universal prekindergarten program were to start in the United States in 2016, our country would see more than $304 billion in total benefits by 2050, amounting to savings of $748.51 per capita that year. Here’s how these total benefits break down:

There are three main costs associated with a high-quality universal prekindergarten program: the cost of the program, increased high school attendance, and increased college attendance. The program itself is based on Chicago’s comprehensive high-quality Child Parent Center half-day program, so the costs take into account the multitude of services that are provided at the Child Parent Center offset by the current spending on similar early childhood education programs as to not double-count expenditures. Because studies have shown that students who attend prekindergarten have higher high school completion rates and are more likely to attend college, these usage costs are also factored into the total cost of a universal prekindergarten program.

In 2050, these costs add up to an additional $35 billion, or $84.54 per capita. $74.27 per capita is attributed to program costs, $2.35 comes from increased high school usage per person, and the remaining $7.92 per person is accounted for by increased college attendance.

If a high-quality universal prekindergarten program were to start in the United States in 2016 and be fully phased in by the end of 2017, the program would require $26 billion in additional taxpayer dollars. Over time, the cost would eventually grow to include the cost of additional high school and college attendance. But in just eight years after full phase in, by the end of 2024, the benefits of the program would outstrip the costs. And by 2050, there would be more than $304 billion in total benefits compared to merely $35 billion in total costs, yielding net benefits of $270 billion. By 2050, for every dollar invested in a universal program, there would be $8.85 in returns. 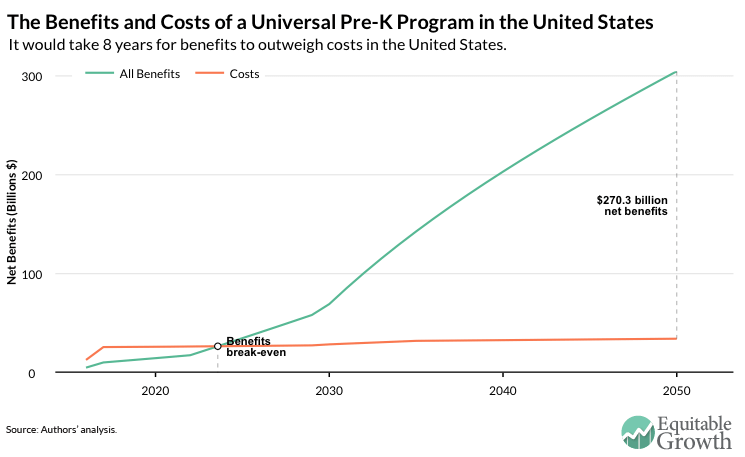 How do the impacts compare across states?

While a universal prekindergarten program benefits all states in the long run, not every state will be impacted in the same way. Some places, such as Vermont and the District of Columbia, already have widely-attended high-quality prekindergarten programs, allowing the benefits of a universal program to set in immediately. Use the sortable bar chart below to compare how each state will be affected.