Under his initial leadership, Equitable Growth launched as a start-up housed within the Center for American Progress, which he founded in 2003. Podesta left Equitable Growth to serve as counsel to President Barack Obama before becoming the chair of former Secretary of State Hillary Clinton’s 2016 presidential campaign. He was also a member of the U.N. Secretary General’s High-Level Panel of Eminent Persons on the Post-2015 Development Agenda. Prior to founding CAP in 2003, Podesta served as White House chief of staff to President William J. Clinton. Additionally, Podesta served as co-chair of President Obama’s transition team and has held numerous positions on Capitol Hill. Podesta is a graduate of Knox College and the Georgetown University Law Center, where he is currently a visiting professor of law. He also authored The Power of Progress: How America’s Progressives Can (Once Again) Save Our Economy, Our Climate and Our Country. 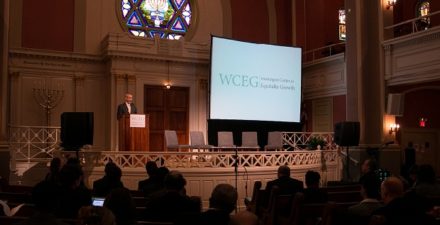 John Podesta’s Remarks at the Launch of Equitable Growth