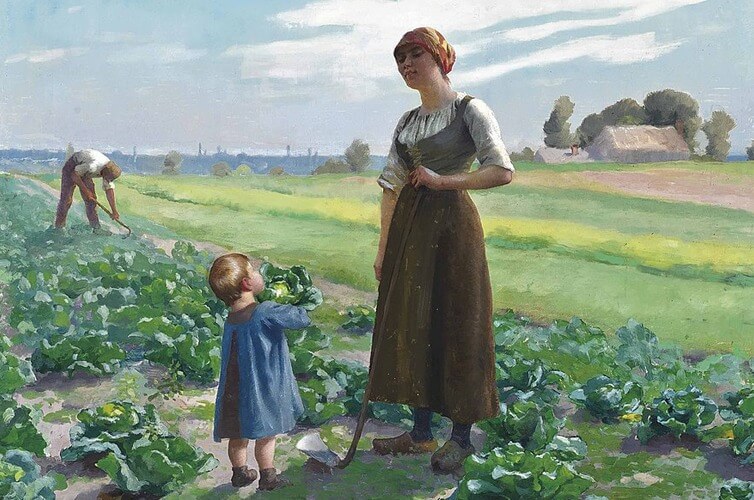 Paid leave supports people who hold dual roles as members of the workforce and members of families. Effort expended in worksites from office buildings to restaurant kitchens to factory floors provides crucial goods and services to people living in the United States. So, too, does work done in homes—from the production of goods such as home-cooked meals to the provision of services such as house cleaning and assistance to family members trying to access medical care. New research on paid leave in California demonstrates the challenge of balancing the dual nature of our obligations as employees and caregivers.

Four economists—Martha Bailey of the University of Michigan, Tanya Byker of Middlebury College, Elena Patel of the University of Utah, and Shanthi Ramnath of the Federal Reserve Bank of Chicago recently released a new paper that draws on rich administrative data and high-quality surveys to examine how an expansion in paid leave in the state of California in 2004 affected both the parenting experienced by the next generation and the work effort of the current generation.

To arrive at this conclusion, the researchers took advantage of a “natural experiment.” Since 1946, women giving birth in California have had access to publicly funded temporary disability insurance—medical leave that women can take for 6–10 weeks depending on their medical condition preceding and following the birth of a child. In the third quarter of 2004, the state added an additional 6 weeks of bonding leave, available to both mothers and fathers to care for a new child. So, on July 1, 2004, the maximum length of paid leave available to new mothers increased from 10 weeks to 16 weeks.

This change spurred many more women to take paid leave. Mothers exposed to the policy change after 2004 were 18 percentage points more likely to use paid leave than similar women who were not exposed to the change prior to that year. (See Figure 1.) 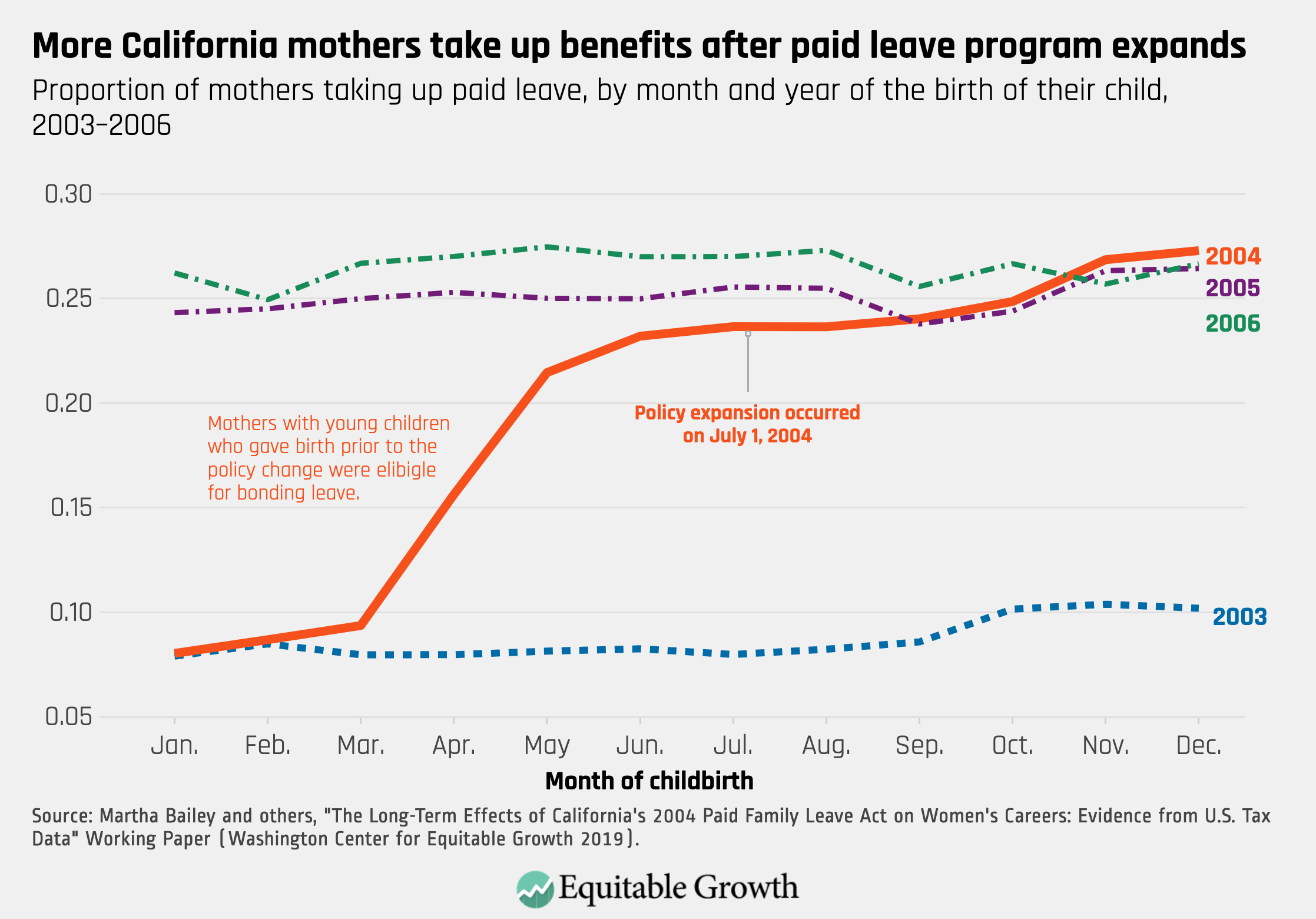 The researchers compared women who wouldn’t have taken up paid leave but for this policy change to similar women who did not experience the policy change—women who gave birth just prior to July 1, 2004, and women in similar states without paid leave policies. They look at women at many points across time, which allows them control for characteristics of the leave-takers that don’t vary over time. They also look at a variety of different groups of women—across age groups, marital status, and income level.

Perhaps the key subgroup whose experiences they examine are women who are giving birth for the first time. These are women who have not yet settled into a routine of parenting, so their experiences are likely to be different from women who established routines when they could not access the expanded paid leave for their first child. And this is likely to be the most policy-relevant group going forward: In the future, hundreds of thousands more women will have first children with access to state-provided paid leave in the state of California, but never in the future will women who continuously live in California have one or more children without access to paid leave and then have another child with access to paid leave.

Using survey data from the U.S. Census Bureau’s Survey of Income and Program Participation, the research team finds that first-time mothers who took up paid leave in response to the policy change spend more time reading to their children, taking them on outings, and eating breakfast as a family, compared to similar mothers not exposed to the paid leave policy change. The researchers surmise that when women take time off for paid leave, they develop a more intensive parenting style than women who have to balance work and parenting from the very beginning of their children’s lives.

This finding squares well with evidence from other studies that suggests that paid leave increases the duration of breastfeeding, reduces pediatric head trauma, and lowers rates of attention deficit/hyperactivity disorder among children, as well as their rates of obesity, ear infections, and hearing problems. Intensive parenting doesn’t just improve child health in the short term, but also improves the long-term educational and labor market outcomes of those children. 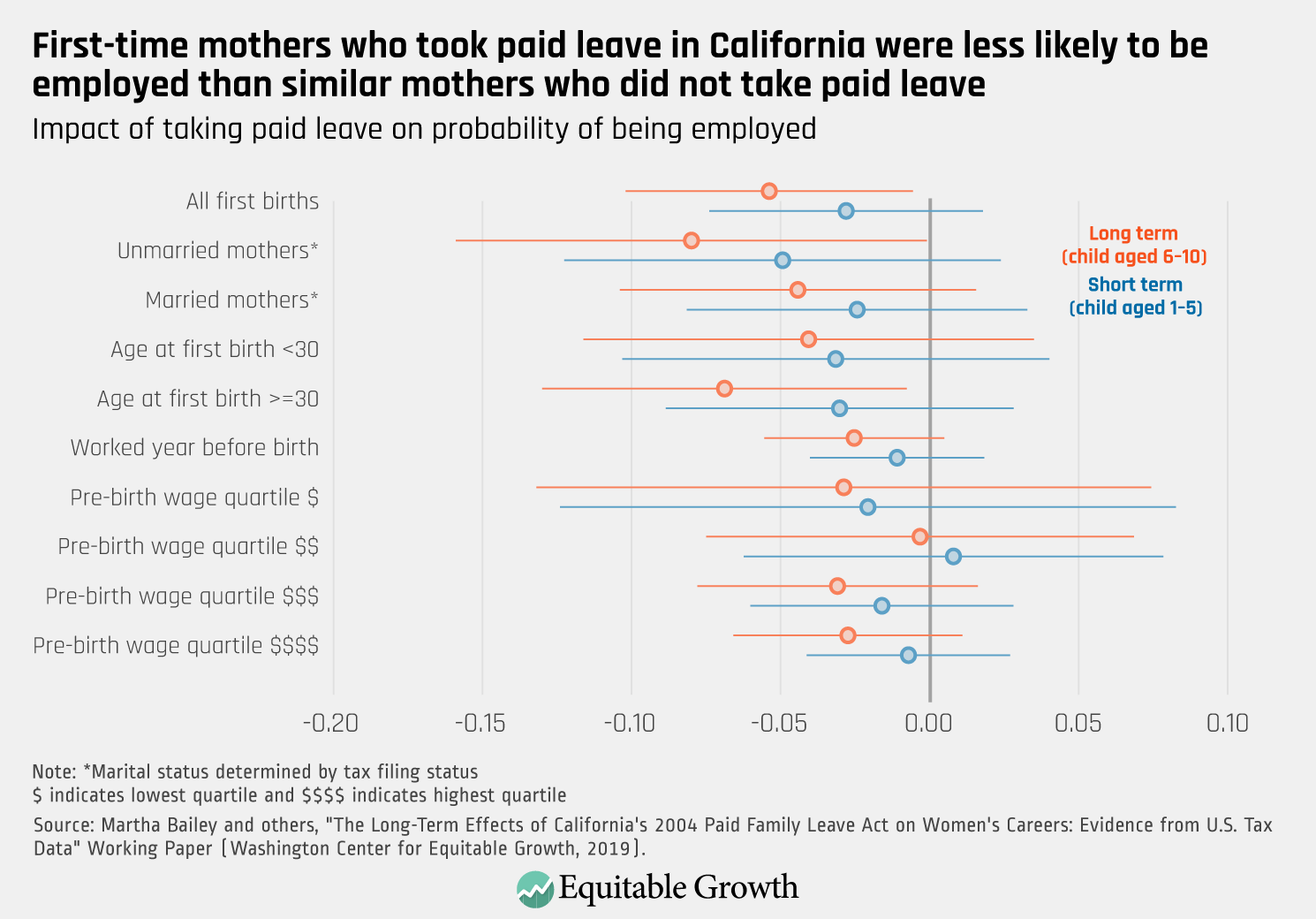 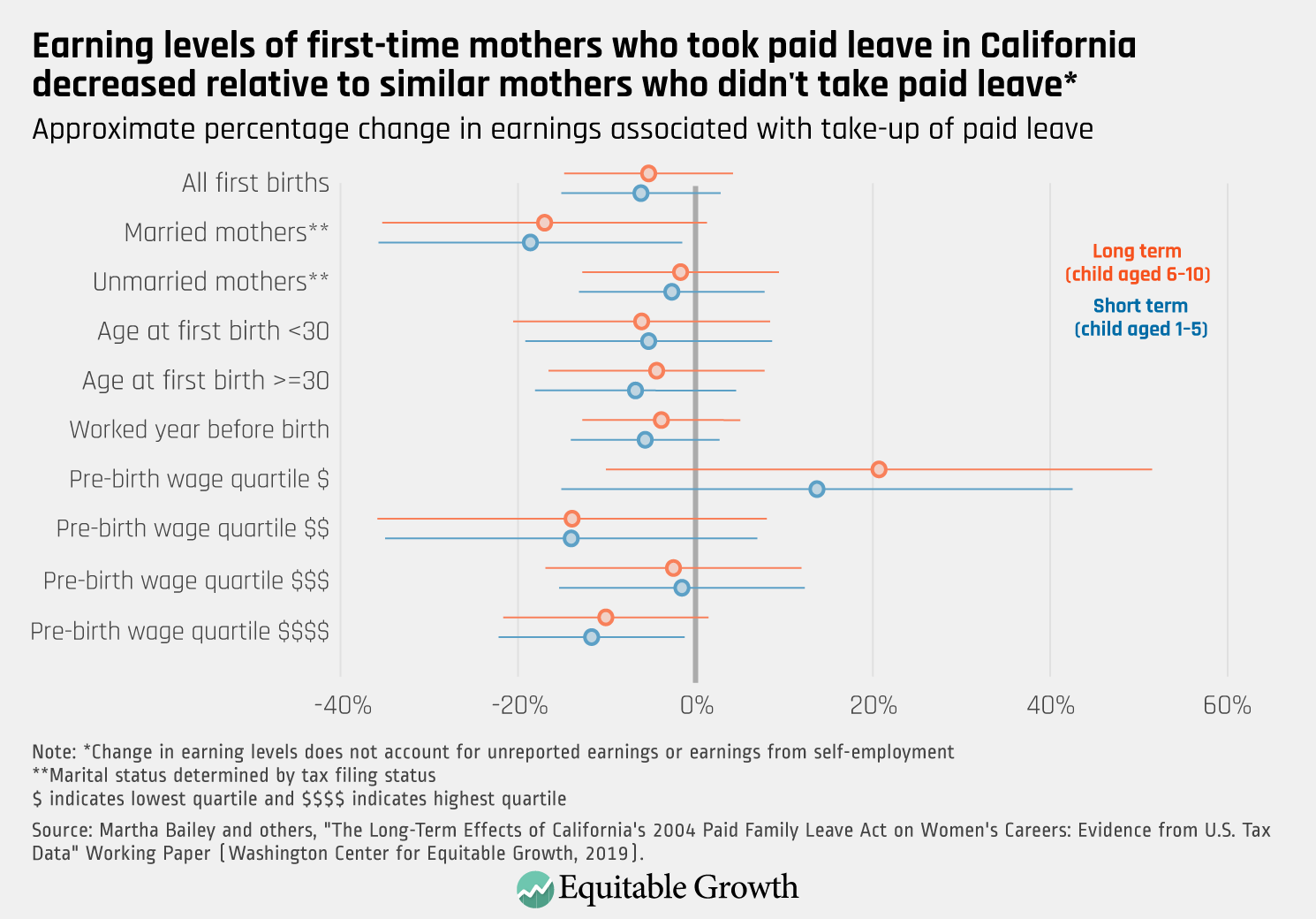 Importantly, the four researchers measure earnings by looking at the wage earnings reported by workers on tax forms, so they can’t determine the number of hours worked, the types of jobs worked, or wage rates. But because they uncover large effects for first-time mothers only, they hypothesize that changes are being driven by changes in family behaviors—such as mothers spending more time parenting and less time in paid work or working at more flexible jobs with lower pay. This suggests that the increased investment in parenting encouraged by paid leave is not compatible with strong labor market attachment in our current policy context.

Without a doubt, the change to California’s paid leave policy that occurred in 2004 made big changes in the lives of California women with children. They were more likely to take up paid leave and take it for longer. They parented more intensively, were less likely to work outside the home, and earned less in reported wages.

In contrast, the lives of men with children in California didn’t change much. Fathers took up paid leave at low rates (3 percent to 4 percent). In heterosexual married couples, when women intensified their work in the home and ramped down their paid work, their husbands did not increase their earnings to compensate. If heterosexual men felt the effects of paid leave, then it was through the changed behavior of their partners and the changed experiences of their children, not through changes in their own behaviors.

Taken as a whole, the study’s findings sit in sharp contrast to earlier work that indicates that the labor force participation of women in the United States is unaffected by paid leave, or even increases. As is the case for any research study, careful readers are likely to raise further questions about the findings. For example: Would the effects on earnings seem so large if we included earnings that are not recorded as wages on W-2 tax forms? The researchers report on average experiences, but might there be two types of responses from women—one type that increases attachment to the labor force and one type that diminishes that attachment—which average to the effect sizes they uncover?

Still, the rich data and rigorous methods underpinning the findings by Bailey, Byker, Patel, and Ramnath suggest that the findings hold water overall, and the key questions relate to their generalizability rather than their veracity.

The cohorts of mothers in the “treatment” group took up paid leave at a time when the paid leave policy was new and did not include job protection, in an economic context of expansion, and in a social context in which their male partners were unlikely to take full advantage of the leave available to them.

Since then, California women have had children in contexts that differ from that of the women in the study period. They have taken paid leave when the policy was more widely known about and included job protection and higher wage-replacement rates. They have entered motherhood during moments of serious economic recession and parented elementary-schoolers in moments of economic expansion—in contrast with the women in the study, whose children entered school age during the Great Recession and sluggish recovery. And they have shared household responsibilities with men who are far more likely to take paid leave themselves. Men’s rates of take-up of paid leave to care for a new child increased from 3 percent to 4 percent in 2004 to 15 percent in 2017, which is a rate almost equal to that of women—40 percent of bonding claims were filed by men in 2017.

So, given the context of the research, what lessons can policymakers take away from this new research? This is a rigorous study that should be taken seriously by the policy community. For the women in the treatment group—and for more than 200,000 Californians each year—paid leave to care for a new child makes a difference. Families can care for their children with less worry about short-term financial insecurity and subsequently the more-intensive parenting appears to persist at least until their children complete elementary school.

But perhaps the key takeaway from Byker, Bailey, Patel, and Ramnath’s research is that our economy, our workplaces, and the way our economy and society divide labor along gendered lines may prevent families from simultaneously prospering financially and parenting intensively. This study illustrates the challenge of designing a single policy that can overcome these cultural and structural barriers. In California at the time the study was conducted—and still today—childcare was expensive and in short supply. A more effective and affordable system of childcare provision that could support parents in providing the high-quality supervision that children need through elementary school, while allowing both parents to work.

Yet other research does point to tweaks to paid leave policy that could improve labor market outcomes for mothers. When countries from Canada to Denmark implement policies that encourage fathers to use paid leave, work inside the home is divided more equitably between members of heterosexual couples, and mother’s earnings from work outside the home increase.

Future research in the U.S. context will show whether the findings from Bailey and co-authors’ study persist in other contexts. If they do, these other cases will offer instructive examples of tweaks to paid leave policies and policy pairings that could yield large dividends for parents’ productivity at home and at work.