Will McGrew discusses the background of the shrinking manufacturing industry in the United States. He explains how the decline in the quantity of manufacturing jobs can be attributed to anti-union policies implemented at the state level. He recommends investing in human capital and research and development in order to secure a competitive and sustainable future for U.S. manufacturing.

Neil Irwin at The New York Times highlights the proposed wealth tax put forth by presidential candidate Senator Elizabeth Warren (D-MA), which would shift the burden of taxes toward those U.S. households that have accumulated mass wealth. Constructed by University of California, Berkeley economists Emmanuel Saez and Gabriel Zucman (an Equitable Growth Steering Committee member and grantee, respectively), this proposal would tax wealth of $50 million or more at 2 percent a year and add an extra 1 percent tax on wealth of more than $1 billion. Irwin breaks down the proposed wealth tax and then examines its promise and pitfalls. [nyt]

Catherine Rampell of The Washington Post discusses the reintroduction of the FAMILY Act by Senator Kirsten Gillibrand (D-NY) and Representative Rosa L. DeLauro (D-CT). Paid family leave, often seen as a “woman’s issue,” is frequently framed as a policy geared to increasing fairness, personal achievement, and bonding time between a mother and child. Yet Rampell points to the macroeconomic benefits of paid family leave, including the potential to boost productivity, increase the women’s labor force participation rate, and create a path for upward mobility. [wapo]

Politicians on both sides of the aisle have expressed concern over the rising costs of prescription drugs in the United States. Prices have become so unaffordable that Americans have turned to purchasing their prescriptions in Canada or Mexico at an exorbitantly cheaper price. While the importation of prescription drugs is illegal in the United States, President Trump and Democrats are pushing to legalize this practice, thus increasing affordability of life-saving medication. [politico]

Former Federal Reserve chair Janet Yellen (an Equitable Growth Steering Committee member) spoke with Leslie Hook of the Financial Times about the merits of a carbon tax as an affordable alternative to a Green New Deal. Yellen indicates that a $40 per ton tax would reduce carbon emissions, meet the climate change commitment agreed to in the Paris Accord, create sustainable environmental conditions for future generations, and be redirected back to the public in dividend payments. This proposed tax has drawn support from more than 3,300 economists and academics across the political spectrum. [ft] 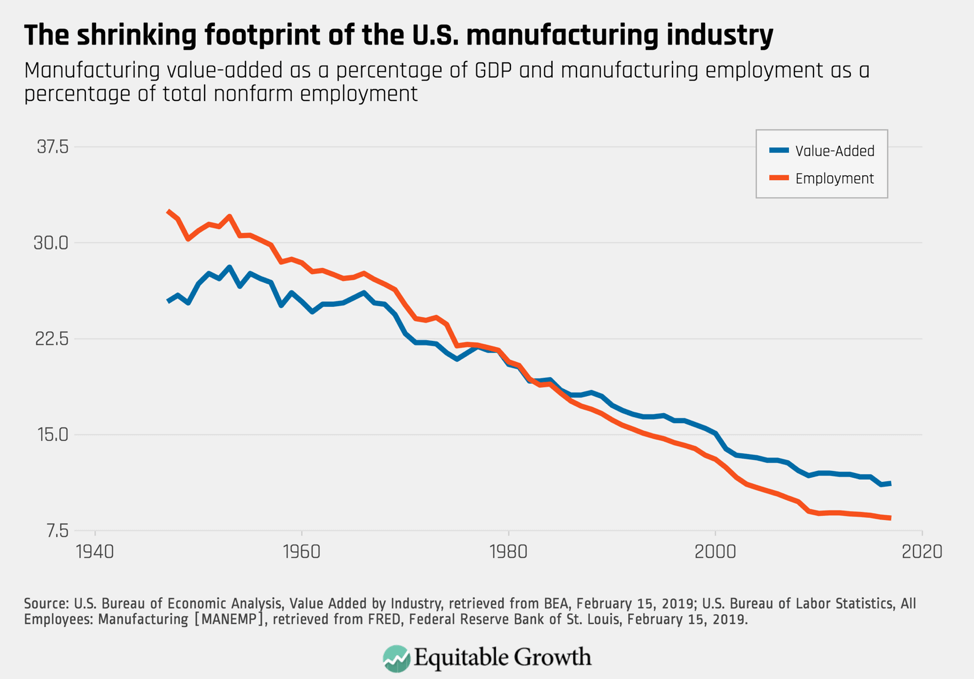 Figure is from Equitable Growth’s, “Building a competitive, talent-driven future for U.S. manufacturing requires investing in our nation’s high-tech advantage”