In keeping with the quiet mood around Washington, DC during the congressional recess, Equitable Growth had a relatively light load of publications released this week. On Monday, I summarized the econometric analysis in a recent paper studying the impact of Norway’s universal childcare program on parents’ participation in the labor market. Their findings buttress the detailed analysis Equitable Growth conducted in 2015 on the benefits of early childhood education. Our Friday feature graphic below is drawn from this report.

Yesterday, Brad Delong released his worthy reads for the week, covering recent writing and research on inequality and equitable growth. In addition to elevating some of the recent work of our policy stream leads in family economic security, competition, and wages, he highlights a recent addition to Equitable Growth’s working paper series by Ioana Marinescu and Herbert Hovenkamp on the negative output and wage effects of anticompetitive mergers in labor markets as well as Paul Krugman’s column for The New York Times on supply chains and trade wars.

Equitable Growth received a shout-out this week from Jeff Miller in his weekly analysis of the week ahead in equities markets. Positing that we have the “best chart pack on JOLTs,” Miller points to our analysis demonstrating that the quit rate in the United States is at a historic high and that tightening labor markets have resulted in fewer hires for each opening. [seeking alpha]

Despite this general strength in the labor market, there remain significant pockets of weakness, particularly affecting minority groups. Stephen Gandel emphasizes continuing racial inequities limiting work opportunities for blacks despite the millions of jobs that have been created over the past decade. In particular, Gandel illustrates a disturbing recent trend in which minority groups (including African Americans) are receiving a much smaller portion of the job gains generated over the past few years. [bloomberg]

Claire Cain Miller discusses the rising costs of parenthood across the U.S. income distribution. In addition to citing other recent studies on the topic, Cain Miller summarizes the findings of a recent working paper by economists Ilyana Kuziemko and Jenny Shen of Princeton University, Jessica Pan of the National University of Singapore, and Ebonya Washington of Yale University. Finding significant negative effects on employment of childbirth, the co-authors argue that women, especially with those with a college education, currently underestimate the employment costs of motherhood. In particular, the authors emphasize the rising pressures to balance working long, inflexible hours with providing extensive enrichment experiences for their children. [nyt]

Matthew Yglesias writes about one way to deal with these and other contemporary concerns of American workers: changing corporate governance to increase worker power. In addition to detailing elements of Senator Elizabeth Warren’s plan to impose the moral obligations of personhood on corporations that claim the legal status of personhood, Yglesias cites evidence showing the negative effects on growth, productivity, and wages due to the exclusive focus on shareholder profits characterizing corporate governance in recent decades. Citing evidence from Germany, Yglesias argues that a renewed form of “stakeholder capitalism” in which workers gaining seats on corporate boards would increase pay equality, innovation, productivity, and sustainability in corporate decision-making. [vox]

Melody Hahm points out that the average annual salary for U.S. nurses of $63,000 is more than double the global salary of $26,698. Hahm also cites a 2017 Equitable Growth working paper on men’s increasing participation in the nursing profession authored by economists Elizabeth Munnich of the University of Louisville and Equitable Growth grantee Abigail Wozniak of the University of Notre Dame. Munnich and Wozniak point to rising educational attainment, liberalizing gender role norms, increasing demand for health care workers, and the effects of automation on male-dominated occupations as central causes for this changing gender composition in nursing. [yahoo finance]

Noah Smith argues that the implications of artificial intelligence for labor markets have been arguably exaggerated in recent policy debates. Despite substantial investments in AI technology by large tech companies, Smith points to data proving that artificial intelligence has neither produced boosts to productivity and private investment nor slowed the gradual, ongoing recovery of labor force participation to pre-recession levels. Smith argues that the applicability of AI to only certain cognitive tasks may limit its impacts on labor markets, but cautions that worker displacement could be substantial if the number of AI-compatible tasks grows in the future. [bloomberg] 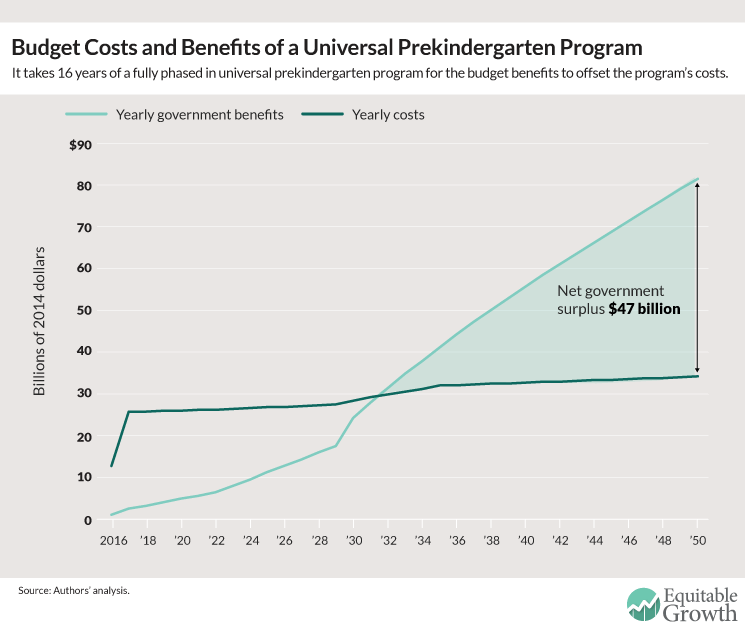 Figure is from Equitable Growth’s, “The benefits and costs of investing in early childhood education.”