The report utilizes three scenarios to illustrate the economic consequences of raising the educational achievement of children from the bottom three quarters of families who are most socioeconomically disadvantaged to more closely match those of children born into the top quarter of families. The bronze scenario looks at the impact economic impact of matching the Organisation for Economic Co-operation and Development average in math and science achievement scores among its developed-nation members. The silver scenario models the cumulative impact if the United States were to bring the U.S. educational outcomes in line with Canada’s achievement scores. The gold scenario calculates the impact of bringing the U.S. average math and science achievement score up to par with the scores of the most advantaged U.S. students.

“The reality in the United States is that persistent educational achievement gaps are generating a massive waste of both human talent and economic potential,” says Equitable Growth Visiting Fellow and report author Robert Lynch. “By merely maintaining the status quo, research shows us that the United States is throwing away enormous economic benefits that we could capture if we pursued policies that raised education achievement. The good news is that by making investments that raise educational achievement and narrow achievement gaps through a broad array of reforms, which include education reform and a host of family friend worklife policies, the improvements would pay for themselves through higher GDP growth rates and increased government revenues. The result of such investments is a 21st century economy where children can thrive and more fully contribute to America’s future economy as highly-skilled workers.”

Key facts from the report:

A summary of the findings: 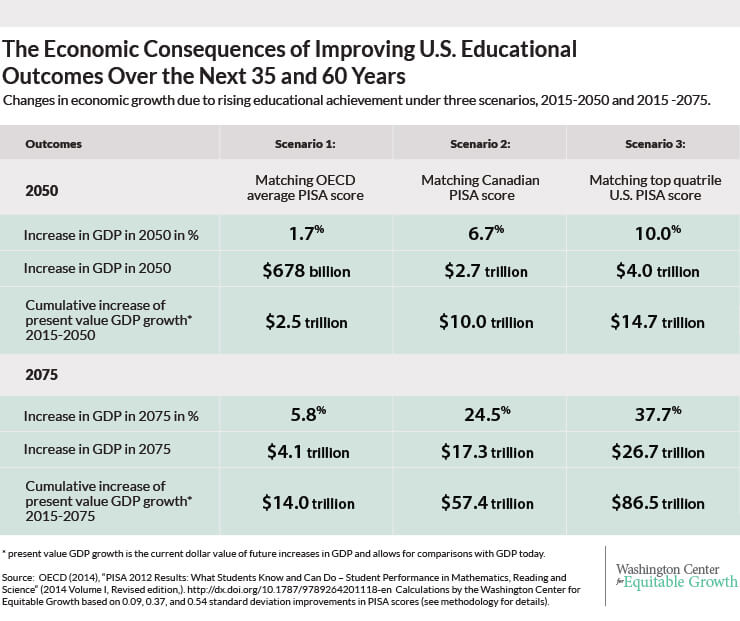 The implications of these findings include: