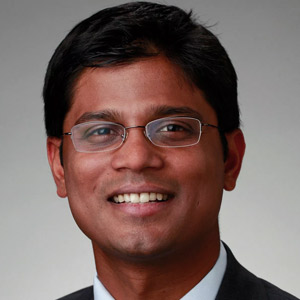 Saravanan Kesavan conducts research on supply chain management for retailers, with emphasis on benchmarking operational performance and management of retail store labor. His research topics include improving labor productivity, reducing employee turnover, forecasting performance, designing managerial incentives, and digitization. His research has appeared in Management Science, M&SOM, POM, and Harvard Business Review. He is a senior editor at POMS and an ad hoc reviewer at Management Science, M&SOM, and POMS. His research has been featured in The New York Times, The New Yorker, Forbes, and other media outlets. Kesavan teaches retail operations and digital operations for MBA students. He has received the “MBA Teaching All Star” award seven times between 2007–2017 and the Weatherspoon Award for Teaching Excellence in the full-time MBA program in 2018. He worked for several years at i2 Technologies, where he helped clients deal with supply chain management issues. He has worked with a number of companies, including The Gap Inc., USAA, Lowe’s Cos., Belk, Texas Instruments Inc., and The Kroger Co. He received his doctorate in technology and operations management from Harvard Business School. He also has master’s and bachelor’s degrees in engineering from University of Massachusetts at Amherst and IIT Madras, India, respectively.