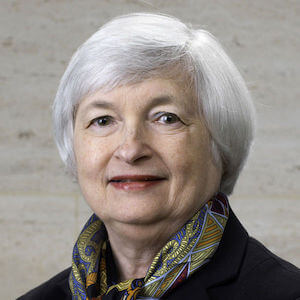 Secretary of the Treasury

U.S. Department of the Treasury

Janet L. Yellen, a former member of Washington Center for Equitable Growth’s Steering Committee, is the 78th secretary of the treasury of the United States. She was sworn in on January 26, 2021. Prior, she was a distinguished fellow in residence with the Economic Studies program at The Brookings Institution. She is the former chair of the Board of Governors of the Federal Reserve System. Prior to her appointment as chair, Yellen served as vice chair of the Board of Governors, taking office in October 2010. She is professor emerita at the University of California, Berkeley, where she was the Eugene E. and Catherine M. Trefethen Professor of Business and professor of economics, and has been a faculty member since 1980. She served as a member of the Board of Governors of the Federal Reserve System from 1994 to 1997, and then left the Federal Reserve to become chair of the Council of Economic Advisers through August 1999. She also served as president and chief executive officer of the Federal Reserve Bank of San Francisco from 2004 to 2010. She is a member of both the Council on Foreign Relations and the American Academy of Arts and Sciences. Yellen hold a degree in economics from Brown University and a Ph.D. in economics from Yale University.