The U.S. Bureau of Economic Analysis today released the latest figures on economic growth that showed economic growth in the last quarter of 2014 was 2.2 percent, matching the previous estimate. In addition to having updated numbers on the Gross Domestic Product, today’s release also contains information on corporate profits. Corporate profits were essentially flat (they fell by 0.2 percent compared to the final quarter of 2013). Declining profits in financial firms, utilities, and foreign operations were offset by profit growth in retail and the rest of the economy—possibly due to lower oil prices. 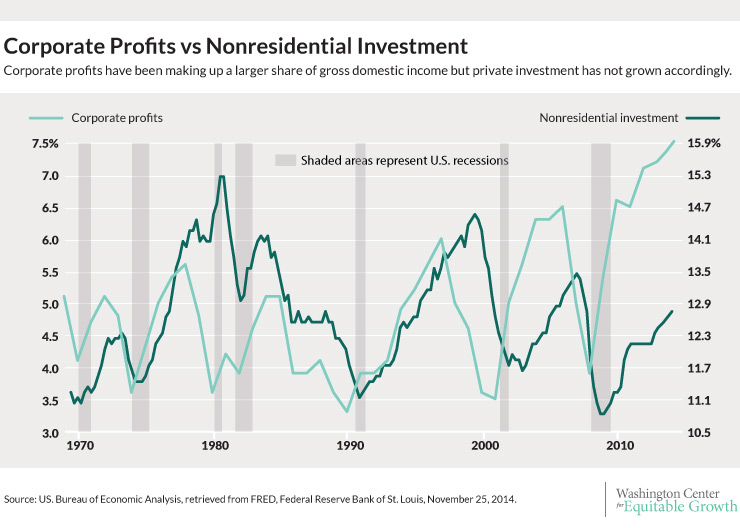 Why is this an important trend to follow? Corporate cash on the sidelines is not building the investments that are needed to support tomorrow’s growth. Instead of being used to build new factories, fund product development, or hire new workers, this money is either sitting unproductively in the bank or is being pushed out to shareholders.

Low interest rates have also failed to raise corporate investment. As economist J.W. Mason of John Jay College noted in a recent piece, there has been a trend since the early 1980s for businesses to spend more of both their earnings and their proceeds from borrowing on shareholder payouts through either share buybacks or dividend payments. They spend less and less of their cash on investment. In the current low interest rate environment, firms can borrow cheaply for investments. Yet since the 1980s, less than 10 percent of the marginal dollar borrowed goes to investment while in the 1960s that was closer to 40 percent.

In a recent speech, Larry Summers attributed this to economic rents—artificially high profits stemming from a lack of competition. In the standard view of a free market, if a business has very high profits, new competitors will enter that market to capture a share of the profits, especially when the cost of capital is very low, as it is now. But if incumbent businesses can erect barriers to new entrants, then they can protect their high profit margins. The fact that business investment is so low when profit margins are high reflects the failure of trickle-down economics to, well, trickle down.

Today’s numbers indicate that investment growth has remained slow even while corporate profits are high if not growing rapidly. This is a trend that should be monitored closely by policymakers and researchers.