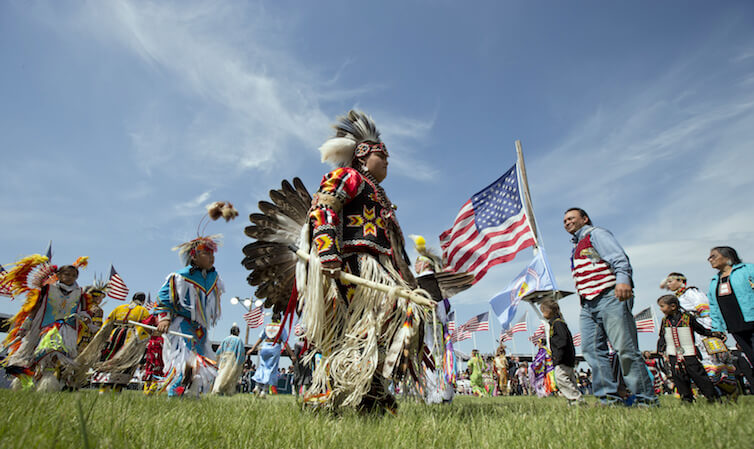 The National Economic Association and the American Society of Hispanic Economists hosted their annual Freedom & Justice Conference this past June at Salish Kootenai College, a four-year Native American tribal college in Montana. The location of the conference was designed to highlight the research being done on economic issues facing Native Americans, as well as the difficulty in conducting this research.

Native Americans face some of the bleakest economic outcomes among minority groups in the United States, including the highest poverty rate of any racial group. Yet there is a dearth of research understanding the economic dynamics facing those who make up 2 percent of the U.S. population. The lack of sufficient data, as well as the context needed to do high-quality research, makes it difficult to determine the most effective policies to ensure equitable opportunity and access to the gains from economic growth.

At the Freedom & Justice Conference, economist Randall Akee—associate professor at the University of California, Los Angeles in the Department of Public Policy and American Indian Studies, as well as a David Rubinstein Fellow in the Economic Studies Program at The Brookings Institution—gave a lunchtime keynote address that highlighted the challenges in doing research on indigenous Americans. Akee noted that these communities are varied within the United States, ranging from Alaska Natives to Native Hawaiians, American Samoans and Taino and Chamorro Pacific Islanders to the many North American Native American tribes. Yet he explained that they are all connected to a pre-invasion and pre-colonial past upon which they maintain distinct identities—ones based on different historical, political, and legal frameworks, as well as culture that need to be considered when conducting accurate research.

Notable past research on Native Americans demonstrates the importance of context in understanding how policy influences economic outcomes. Akee’s keynote reviewed examples of research including studies on the impact of assimilation, criminal justice, land-tenure institutions, and the effects of poverty alleviation on children’s future outcomes. One such example was recent research by economists Valentina Dimitrova-Grajzl at the Virginia Military Institute and Peter Grajzl and A. Joseph Guse at Washington and Lee University, showing how the adoption of state law rather than federal law on Native American reservations increased crime, attributed to jurisdictional confusion and lack of enforcement, and negatively impacted median household income. These outcomes were complicated by the impact of race and language and demonstrate how analysis needs to consider nonrandom effects such as these to avoid bias in economic research and subsequent policy recommendations flowing from the evidence.

Akee’s own recent research on the impact of poverty alleviation on political engagement—reviewed in his lunchtime keynote and since published as a National Bureau of Economic Research working paper with economists William Copeland and E. Jane Costello at Duke University, John B. Holbein at Brigham Young University, and Emilie Seimonova at John Hopkins University—relies on a so-called natural experiment within the “Great Smoky Mountain Study,” a longitudinal study of children in rural western North Carolina. Midway through the years of study, a casino opened up on the Eastern Cherokee Reservation that distributed a proportion of profits to all adult tribe members, regardless of income level or employment status. This unconditional cash transfer enabled the four researchers to examine its effects. They found that the cash transfers increased civic engagement as measured by future voting of those who were ages 13 to 17 when their families began receiving the allotment. Importantly, they found that the impact was greater for low-income families, effectively closing the participation gap between high- and low-income individuals among the Eastern Cherokee as they became voters.

Unfortunately, due to data limitations, even researchers with the backgrounds to understand the broader context of the society and culture of Native Americans often take necessary shortcuts in their analysis, while others don’t know that they are using faulty measures or variables in their analysis. One example Akee brought up was that some measures of economic well-being may not be directly applicable to the experience of these communities such as overcrowded housing for some traditional tribal homes with a single room. Likewise, years of schooling measures often do not reflect traditional knowledge, yet people can be considered masters of cultural or other practices that have great value to their communities.

What’s more, common economics research on topics such as income distribution are complicated by which measure one uses when studying Native Americans alone or in combination with other races. When studying income levels on reservations, a researcher needs to consider whether to examine only tribe members or the entire population of the reservation. These lessons can apply broadly to underrepresented demographic groups in economic research across the many indigenous American communities. These issues can lead to problematic research that would not stand up in other areas of economics that have more readily available data, and particularly areas that have data surveys designed to address standard pitfalls and common questions.

This lack of data, in turn, reinforces a perception that research in this subject area is not pure economics, but rather history or anthropology. This may further diminish pressure for government statistical agencies to collect sufficient data, through oversampling, with well-designed surveys in order to conduct high-quality econometric analysis. The potential for improving economic opportunities for Native Americans is constrained by the lack of evidence-based research that can demonstrate how policies impact these communities, and why high-quality data is necessary for doing policy analysis for many underrepresented groups.

—Thank you to Randy Akee for sharing his presentation materials, as well as his helpful feedback on this column.